Home General California will have its first Latino senator

California will have its first Latino senator 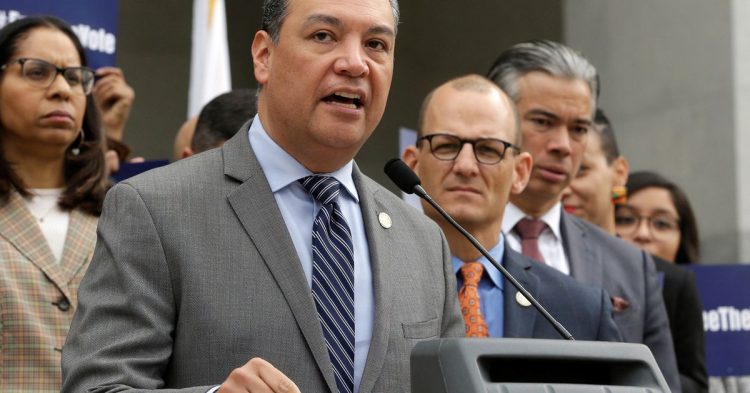 California Gov. Gavin Newsom has selected California Secretary of State Alex Padilla to fill Vice President-elect Kamala Harris’ US Senate seat. California has never before had a Latino senator, despite the fact that nearly 40 percent of its residents are Latino — and Padilla will change that.

“The son of Mexican immigrants — a cook and house cleaner — Alex Padilla worked his way from humble beginnings to the halls of MIT, the Los Angeles City Council and the State Senate, and has become a national defender of voting rights as California’s Secretary of State. Now, he will serve in the halls of our nation’s Capitol as California’s next United States Senator, the first Latino to hold this office,” Newsom said in a statement announcing his decision.

While Padilla’s selection is a representational victory for Latinos, it also means there will not be a single Black woman in the Senate. This is a return to the norm — Harris was only the second Black woman ever elected to the chamber. Newsom’s choice also reflects the growing strength of the state’s Latino political coalition, which waged a monthslong campaign urging the governor to pick from among its ranks. The Legislative Black Caucus did the same but was obviously unsuccessful.

His appointment will make history. But the @AlexPadilla4CA I know is far more interested in changing history — especially for the working men and women of our state and country.

I can think of no one better to represent the state of California as our next United States Senator. pic.twitter.com/xiAzpTS42Y

“We are adamant that this position must go to an African-American woman as a result of our hard work in this last election, as well as our hard work in California and representing the Democratic Party,” Rep. Shirley Weber, chair of the Legislative Black Caucus, said at a November press conference at which the caucus nominated Reps. Karen Bass and Barbara Lee as candidates for the position.

As Teddy Schleifer reported for Recode, a group of the state’s largest donors urged the governor to select a woman of color for the seat. They addressed a letter to Newsom in full-page ads in the Los Angeles Times and the San Francisco Chronicle, writing that “women of color are the core drivers of electoral progress in our country, and their voices should be heard in the nation’s highest governing body. … We look forward to you selecting one of them.”

Despite their efforts, Padilla was seen as the front-runner for months, as reported by Li Zhou and Benjamin Rosenberg for Vox. “Both of California’s senators have come from the San Francisco Bay Area since 1992,” they wrote, noting that Padilla’s background in the Los Angeles area, where the bulk of the state’s Latino population resides, has been a strong vote in his favor. Padilla will hold the seat until 2022, when he will most likely run for a full Senate term.

Padilla’s star rose this year as the security of the nation’s election was baselessly yet repeatedly called into question by President Donald Trump. By attacking primarily secretaries of state, Trump highlighted how central they are to the election process, giving Padilla an opportunity to champion his work, including expanding ballot access and modernizing California’s voting systems.

Another contender for the position, California Attorney General Xavier Becerra, was selected by President-elect Joe Biden to lead the US Department of Health and Human Services. His departure could provide Newsom the opportunity to elevate one of the candidates passed over for Harris’ Senate seat. This statewide position has historically been a springboard to higher office — in addition to Becerra, Harris previously served as California’s attorney general, as did former California Gov. Jerry Brown.