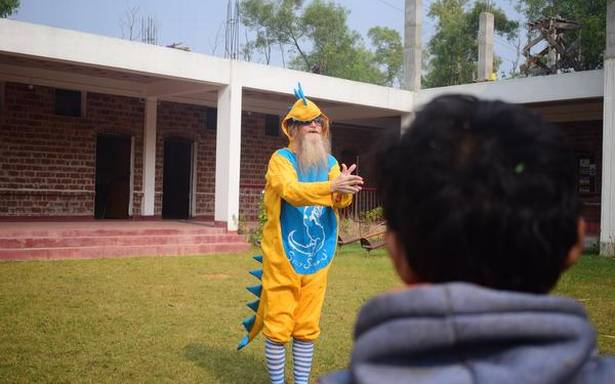 This Christmas, a visiting Canadian writer staying put in Santiniketan due to the pandemic, has decided to play Santa Claus to children without parents or a home by featuring them in videos of carols and rhymes that have lyrics altered to bring extra cheer.

The videos, to be released on YouTube on a regular basis from later this month right until the Christmas of 2021, “will immunise the inner child in us from the psychological attack the virus has unleashed upon us,” according to Brian Godzilla Salmi, 57, who came to Santiniketan in February this year and doesn’t intend leaving any time soon for the fear of contracting the virus. Viewers shouldn’t find it too difficult to relate to him for he already sports a beard similar to that of Santa — and Rabindranath Tagore.

He came to Santiniketan at the invitation of his friend Ananda Lee Tan, whose paternal grandfather had started the Chinese Department at Visva-Bharati at the invitation of Tagore (the two met in college in Vancouver when Ananda moved to Canada in 1986). The homeless children he is engaging are sheltered by Sishutirtha, a school run by Sudripta Tagore, a great grandson of Rabindranath.

“Everyone wants to see 2020 in the rearview mirror. In the famous words of Queen Elizabeth, it has been an ‘annus horribilus’. Her Majesty was speaking of 1992, but 1992 was an extended trip to Disneyland compared to 2020,” Mr. Salmi told The Hindu.

“The vast majority of us will survive COVID-19, but suffering through the pandemic, and its myriad aftershocks and side effects, may destroy the inner child inside of us. In order to safeguard against that possibility, the Souper Sillysaurus Conspiracy [that’s how he has labelled his initiative] is launching this YouTube juggernaut,” he said.

“The videos will be released in the next two weeks and will be followed by a series of brand new nursilly rhymes in the form of one-minute songs. On Christmas Day we will release 30 of those nursilly rhyme videos, and we will release a new one every day until Christmas 2021. So, when people are feeling down, they will know that at the same time every day they are going to get a new injection of silly on our YouTube channel,” Mr. Salmi said.

Sudripta Tagore is impressed by the project. “It’s good for the children,” Mr. Tagore said, “Learning new songs and meeting someone from a different cultural background is a good exposure for them.”