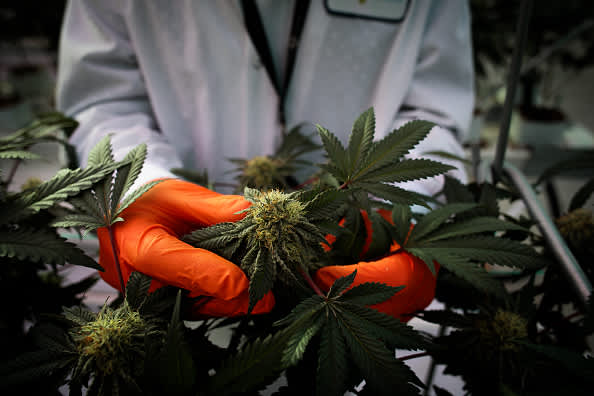 A worker inspects cannabis plants inside the grow room at the Aphria Inc. Diamond facility in Leamington, Ontario, Canada, on Wednesday, Jan. 13, 2021. Tilray Inc. and Aphria Inc. agreed to combine their operations, forming a new giant in the fast-growing cannabis industry.

Shares of a handful of cannabis stocks are surging on Wednesday, the newest set of targets from the Reddit trading community betting on the federal legalization of the plant under the new Democratic administration.

The group of cannabis companies are garnering attention from the same WallStreetBets Reddit army that contributed to the epic short squeeze in GameStop last month. Several posts on the social media forum show users expressing optimism about the stocks’ upside.

“We believe the rally in Canadian names is mostly driven by retail investors, maybe fueled by Robinhood and Reddit, that’s really piling into the Canadian cannabis names in particular,” Pablo Zuanic, analyst at Cantor Fitzgerald told CNBC. “I’m not going to say it’s a GameStop type of case but the Canadian rally is not entirely based on fundamentals. But when we talk to clients we tell them careful trying to short these Canadian names because you know what happened with GameStop on the way up.”

The move in pot stocks could also be related to high short interest ratios, which measure how many of the company’s traded shares are being used in bets against the company. GameStop and AMC Entertainment were targeted by retail traders in part because their high short interest made the stocks attractive candidates for a so-called short squeeze. Tilray’s short interest is equal to 22.5% of the shares available for trading, according to FactSet. The official short interest data is current as of Jan. 29.

“The feedback is its some of the message boards are putting the big salient names in their scope,” W. Andrew Carter, an analyst at Stifel told CNBC. He has a sell rating on Canopy Growth and Aurora. Stifel has a hold rating on Aphria and Tilray.

“The shorts have mostly gone home for the year so the unwinding isn’t as much of a tailwind as it was for the early price action it just really is just that much buying and not much resistance,” said the analyst. “It’s very difficult to justify where these stocks are trading right now.”

“This is totally on script for the anti-establishment movement on WSB and Reddit. They are feeling their crowd-funding oats and are now aiming it at whatever social disruption they can cause,” Tim Welsh, founder and CEO of wealth management consulting firm Nexus Strategy, told CNBC. “And no better historical symbol to amplify personal freedom and revolution than pot.”

Part of the discussion on Reddit has centered around the pending merger between Tilray and Aphria. According to a December press release, Aphria shareholders are set to receive roughly 0.84 shares of Tilray per one share of Aphria when the deal closes.

Goldman Sachs chief U.S. equity strategist David Kostin said on “Squawk on the Street” that the gains for popular Reddit stocks were related to a strong start to the year for small caps and a continued surge of new special purpose acquisition companies.

“The pockets of excess, if you will, or buoyance or frothiness, definitely exist in some sectors … but at the end of the day rates are super low,” Kostin said.

The cannabis companies have also gotten a boost from the Democratic party’s, which now holds the White House and a majority on Congress, intentions to legalize the plant at the federal level.

Canaccord Genuity analyst Matt Bottomley downgraded Canopy Growth to sell from hold on Wednesday, saying that the Canadian company’s stock price had run up too far given the legalization landscape in the U.S.

“Although we believe it is possible for Cdn LPs to eventually secure THC exposure in the US, we do not foresee federal cannabis legalization in the US anytime soon and believe CGC’s value appreciation as of late is likely not met with corresponding fundamental upside at this time,” Bottomley said in a note.

Tilray is no stranger to the short squeeze that occurred in GameStop and AMC last month. Back in 2018, shortly after it went public, the Canadian pot producer’s stock was ensnared in a wild short squeeze and rose about 1,400% between July and September of that year on an intraday basis.

Tilray CEO Brendan Kennedy told CNBC during the GameStop drama that he was experiencing PTSD from his own short squeeze years before.

“I remember getting five different calls from Nasdaq in a single day about our stock being halted because the short sellers were being squeezed so badly,” Kennedy told CNBC’s “Squawk on the Street.” “My advice to those CEOs would be that, at times like this, your company is not your stock and your stock is not your company.”

— with reporting from CNBC’s Kevin Stankiewicz.