Caring for an endangered visitor 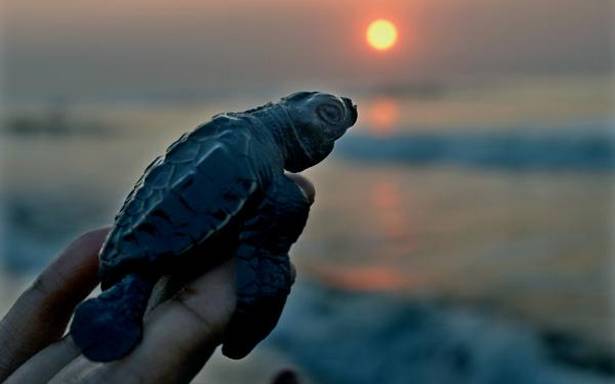 Sometime in the early part of 1976, Dr H. R. Bustard, an international expert on turtles and crocodiles, discovered a mass nesting of Olive Ridley turtles at Gahirmatha in Odisha. Subsequently, another mass nesting location was found in Rushikulya, also in Odisha. This was the first time that Olive Ridley nesting pattern was known and researchers started to work on it.

A few years later, in the early 1980s, for the first time mature Olive Ridley turtles were seen crawling onto RK Beach to find a suitable nesting spot. The researchers in the Zoology Department, Andhra University, plunged into it and since then they have been monitoring the nesting pattern of the turtles which have been categorised as ‘Vulnerable species’ by the IUCN Red list.

Today, there are about six sporadic Olive Ridley nesting spots along the coast of Visakhapatnam district from Pudimadaka in the south to Bheemunipatnam in the east.

Discovering the Olive Ridley at RK Beach was a big thing for us. But unlike Gahirmatha or Rushikulya, which are mass nesting centres and they (turtles) come in thousands, Visakhapatnam is a sporadic nesting centre, where they come in hundreds, says Professor Emeritus Bharata Lakshmi from the Zoology Department of Andhra University.

The Olive Ridley turtles that come to Visakhapatnam for nesting have their habitat in the Pacific Ocean or Indian Ocean. Their mating time is 40 to 45 days and thereafter the males go back to their habitat, while females come for nesting. They generally look for white beaches with a slope or gradient and that is how the beaches along the Visakhapatnam coast provide them a natural setting, she explains.

They are migratory species and their breeding area and living area are different. The mature females go back to their living area after the nesting period, she adds.

In Visakhapatnam, there are about six nesting spots located in areas such as Naval Coast Battery, RK Beach, Pudimadaka, Jodugullapalem and Bheemunipatnam, says Pradeep Nath of the Visakha Society For Protection And Care Of Animals (VSPCA).

Every nesting centre is entrusted to four volunteers, who scout the 4 km radius from the protected area on a daily basis during the nesting period which is generally from November to March, and the peak being from January to February-end.

The mature female turtles come to the shore during high tide and lay the eggs. “Once they are spotted, we approach the nest after the mother leaves; we then gather the eggs scientifically and they are relaid at the protected areas. It takes about 45 to 60 days for the eggs to hatch and then we release the hatchlings into the sea, says Mr. Pradeep.

According to Prof. Bharata Lakshmi, each turtle lays 100 to 150 eggs and 80 to 90 of them hatch successfully. But the survival rate for the hatchlings at sea is said to be 1 out of every 1,000.

Both are of the opinion that the nesting has been on the rise and will continue to increase in the future due to the ‘Imprint’ factor.

Elaborating the ‘Imprint’ factor, Prof. Bharata Lakshmi says, “It has been proven that the place of nesting gets imprinted into the hatchlings. And once they become mature after 15 or 20 years, they come back to the same place of their nesting. Keeping this mind, if the nesting started in early 1980s, then this has been the factor for increased nesting along the Vizag coast over the years and it will increase in the coming years as more hatchlings will become mature.”

Mr. Pradeep says the government should step up its initiative to protect the nesting sites, primarily from human intervention. “This year, the nesting result has been good as during March-April we had the lockdown due to the COVID-19 and turtle-human interaction was very less,” he remarks.

Shah Rukh Khan Gets An Unexpected Visitor As A Kannada Director Camps Outside Mannat...

Anushka Sharma talks about caring for her baby more than herself in new ad,...

Georgina Mace, Who Shaped List of Endangered Species, Dies at 67