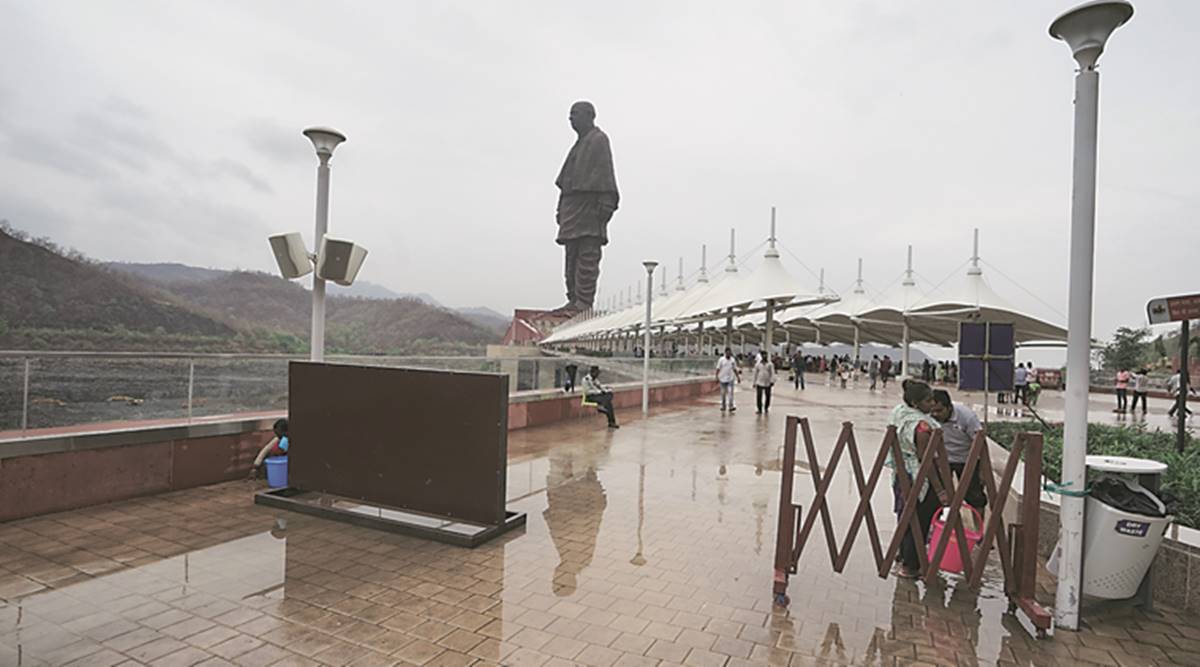 
The complaint, filed by the manager of a Vadodara branch of HDFC bank, states that the money was allegedly siphoned off during the period between October 2018 and March 2020. (File photo)

The Narmada District police booked staff of Writer Business Services Private Limited, a cash management company, for the alleged theft of Rs 5.25 crore pertaining to the daily cash collection from the Statue of Unity and its allied projects. The complaint, filed by the manager of a Vadodara branch of HDFC bank, states that the money was allegedly siphoned off during the period between October 2018 and March 2020.

The Kevadia police station, which has registered the complaint, has started an investigation into the financial transactions of SoU.

The complaint filed late on Monday states that the bank has engaged Writer Business for offering doorstep cash collection facility to the Statue of Unity, which had offline ticket counters before the Covid-19 lockdown for entry to various projects of the tourist spot as well as the regular parking charges.

An official of SoU said, “The HDFC bank has been providing services for the cash collected daily by the SoU administration at various counters for offline ticketing and parking fees, and depositing it in the Statue of Unity bank account in its Vadodara branch. The receipt of the cash received is issued to the SoU administration and it is periodically reconciled with the cash deposit entries made in the bank account.”

During the reconciliation carried out with the HDFC after the easing of Covid-19 curbs, the auditors of SoU noticed that the receipts submitted by executives of Writer Business on behalf of the bank did not match with the actual entries into the account.

“An amount of Rs 5.25 crore was missing although the receipts in our record showed that the agent of the HDFC bank had been handed over the amount. The agents provide SoU with a receipt on the letterhead of HDFC. The issue was raised with the bank, which proactively initiated a probe, the official said.”

Narmada District Collector DA Shah, who is also the CEO of the Statue of Unity said that following the discovery of the alleged theft, a committee was formed which included officials of the district administration, HDFC bank, Statue of Unity as well as the agent of HDFC bank.

Shah said, “For collection of cash from the SoU administration and for its deposition in the bank Account, HDFC bank has engaged Writer Safeguard Private Limited. This is purely their internal arrangement and SoU Administration has nothing to do with it. So, HDFC bank is solely responsible for this transaction process. The committee met and scrutinised the records and it was established that the cash was indeed handed over to the bank. So, as per the agreement, the bank has credited the amount to the SoU account by along with the interest, while they will resolve their dispute with their agent on their own.”

Vani Doodhat, Deputy Superintendent of Police, Kevadia, said, ” The SoU has provided us with a huge number of daily receipts and transaction slips, which we are examining. We will call in the staff of the agency to question them after identifying the employees who handled the money during the said period.”

EthereumEthereum slid by 5.16% on Friday. Partially reversing an 8.89% rally from...
Read more

IRFC manages to raise Rs 1,389 crore from 31 anchor investors ahead...

Government of Singapore was the largest investors among foreign institutions, buying...
Read more

The best Samsung Galaxy S21 alternatives: 6 phones to consider before...