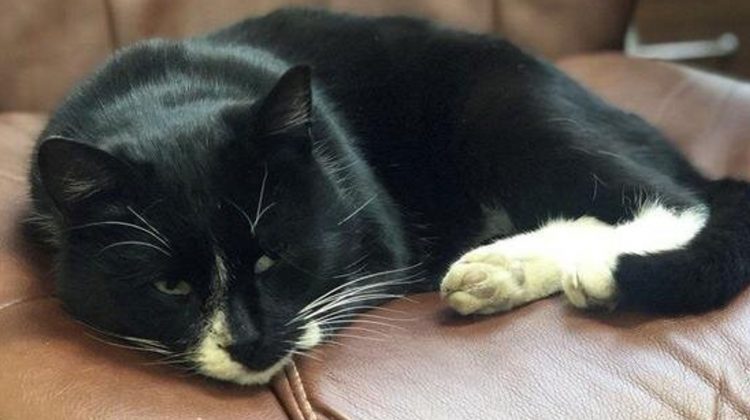 A Russian cat got a new chance at life and a new career after a close call on a trash plant conveyor belt.

A worker at a trash sorting facility in the city of Ulyanovsk, Russia, found the black and white feline inside a tied plastic bag on a conveyor belt Monday.

Surveillance video showed employee Mikhail Tukash gingerly removing the cat from the bag and holding him; it went viral in Russia earlier this week, according to The Moscow Times.

Tukash’s job requires him to open any bags to check inside for metal.

“I felt something soft inside the bag,” Tukash told the tabloid newspaper Moskovsky Komsomolets, Reuters reported. “I cut the bag open slightly, and I saw eyes looking back at me.”

The Ulyanovsk region’s Ministry of Environment honored Tukash with a letter of appreciation and said the cat had been “on the brink of death.” He would have “ended up in the trash separator” had Tukash not grabbed him, the ministry said.

The ministry adopted the cat and bestowed upon him the honorary title of deputy environment minister, Reuters reported. Photos of the cat showed him already lounging on the job.

The ministry launched a contest to name the cat.

The cat is now in good health and appears to be well-fed. People who cannot take care of pets should find them another home or bring them to a shelter, local environment minister Gulnara Rakhmatulina urged in a statement.

Three kittens in New Jersey had a similar lucky rescue this week. A worker at the Burlington County recycling plant discovered the kittens stuffed into a backpack and saved them moments before a conveyor belt would have sent them into a contraption workers called the “glass crusher,” CBS Philly reported.

Christmas Miracle: Precious is one of three adorable kittens tossed in backpack last Wednesday and thrown into a recycling bin… rescued from the conveyor belt of a NJ recycling plant. Meet the man who saved them tonight at 4 & 5pm on @CBSPhilly 🐱 pic.twitter.com/OIOgNzd2jx

The three kittens — now named Precious, Sunny and Luna — were unharmed and now have homes, including one with a plant worker. It’s unknown if they will receive government positions, though they certainly deserve them.