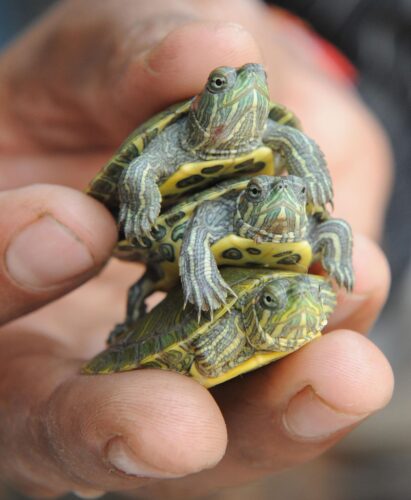 According to the Centers for Disease Control and Prevention (CDC), small turtles may be the source of a new Salmonella outbreak that has already left at least 22 people sick across seven different states. That’s five cases in California, two in Connecticut, one in Florida, one in Maryland, two in New Jersey, two in North Carolina, and nine in Pennsylvania. So far, the result has been eight hospitalizations and one death. All of this has led the CDC to re-emphasize that you shouldn’t kiss or snuggle with turtles.

Yes, I know, I know, there go your weekend plans. Sure watching The One on Netflix may not seem quite the same without being able to snuggle with your turtles. But outbreak or no outbreak you really shouldn’t be placing your mouth anywhere near these little motor homes with legs. Kissing your turtle can be a bit like kissing a toilet brush. This certainly isn’t the first time that the CDC has been turtly serious about such pet turtle warnings. Past outbreaks, like the one that I covered back in 2019 for Forbes, should have “tortoise” us that turtles can carry pathogens like Salmonella.

And you don’t want Salmonella down there. It’s the opposite of avocado toast. It can lead to a nasty bout of fever, headache, nausea, vomiting, loss of appetite, abdominal cramping, bloating, and diarrhea. This can include bloody diarrhea, which can be bloody unpleasant. Even worse, especially in those with weaker immune systems such as young children or older adults, Salmonella infections in some cases can result in various complications including death, which would be turtley bad.

That’s why the CDC urges you to wash your hands thoroughly with soap and water anytime you touch turtles or anything they may have touched. Don’t share anything besides secrets with your turtles. Don’t let your turtles roam in your kitchen or any other possible eating areas.

One more thing. When it comes to pet turtles, size does matter. The U.S. Food and Drug Administration (FDA) has banned the sale and distribution of turtles that are less than four inches long. Therefore, should someone try to sell you a turtle that doesn’t measure up, before you shell out some cash, you may want to say, “oh shell no.”