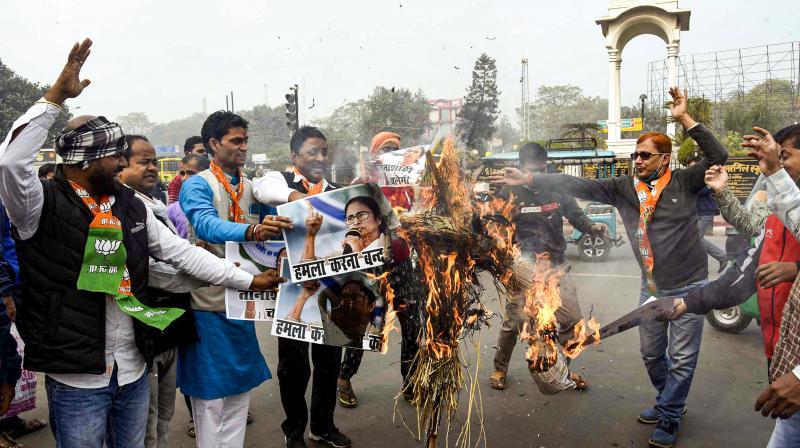 State chief secretary Alapan Bandyopadhyay and director general of police Virendra were directed to meet union home secretary Ajay Bhalla at 12.15 pm to “discuss the  law and order situation including the incidents regarding certain Z-category protectees” in the poll-bound state.

The ministry of home affairs’ step came after it received an adverse report from governor Jagdeep Dhankhar of “serious security lapses” on part of the state police which led to the brazen attack on Thursday leaving two senior BJP leaders: Kailash Vijayvargiya and Mukul Roy, who were also in Mr Nadda’s convoy, injured.

The MHA’s move however has infuriated the Trinamul supremo and the chief minister amid reports of Mr Shah’s possible visit to the state on December 19-20. She has not allowed  her government’s top two bureaucrats to go ahead, sources revealed.

In the afternoon Mr Bandyopadhyay assured  Mr Bhalla in a letter of the state government’s “elaborate arrangements for security coverage” which included a pilot and a bullet proof car for Mr Nadda in his convoy and a large deployment of police force led by the deputy inspector general  of the range.

He however argued, “The tagging of many vehicles to the protectee convoys however made the situation unweildy, because typically, security authorities are to handle a protectee convoy of a few vehicles only, and not with/in the presence of so many other vehicles which got tagged to the convoy traveling together.”

Pleading for relief from appearance, Mr Bandyopadhyay told Mr Bhalla, “Further, 3 cases have already been registered in this connection, while two of them are specifically for vandalism, one each at Usthi PS and Falta PS, both under the Diamond Harbour Police District. 7 persons have been arrested in these 2 cases. While further reports are being obtained and compiled, in the circumstances, I am directed to request you kindly dispense with the presence of the State officials in the meeting, considering that the State Government is already addressing this issue with utmost seriousness.”

But Sreerampore TMC MP Kalyan Banerjee blamed BJP leader Rakesh Singh for provoking the attack on his party chief. “Mr Singh was in the convoy in front of Mr Nadda. He has 55 criminal cases against him and he made provocative gestures at the crowd. An FIR has been registered against him,” he alleged.