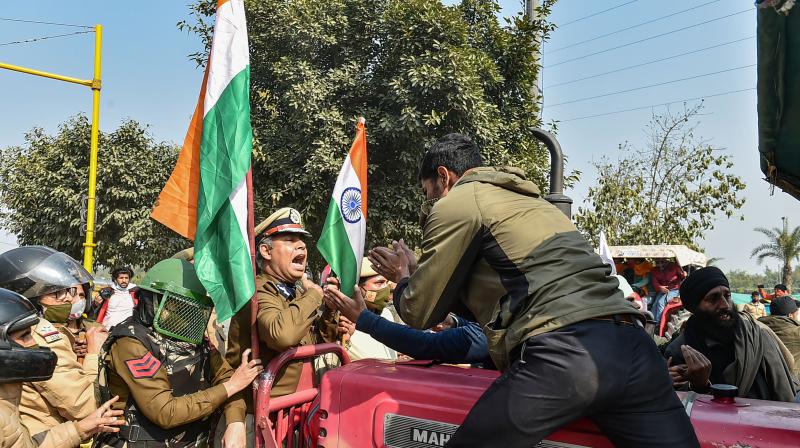 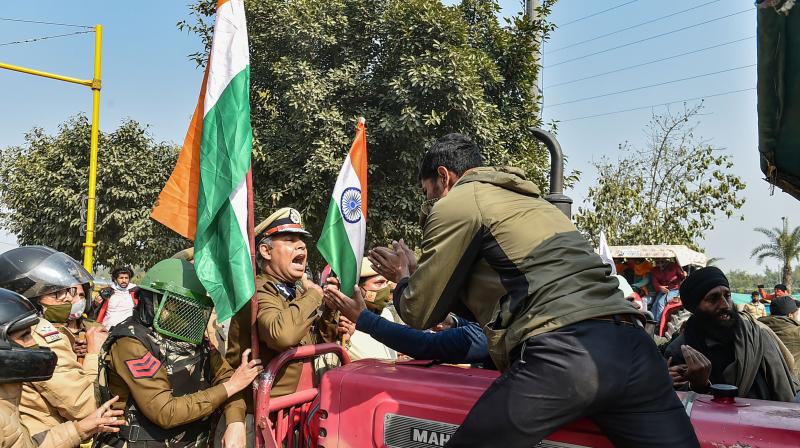 Police attempt to stop farmers during their ‘Kisan Gantantra Parade’ in protest against Centre’s farm reform laws, on the occasion of 72nd Republic Day, near Akshardham in New Delhi, Tuesday, Jan. 26, 2021. (PTI)

New Delhi: Police on Tuesday used tear gas on groups of farmers and resorted to baton charge as protestors broke past barricades with tractors at different border points and did not take the pre-decided routes for their march in the national capital.

The Delhi Police had given permission to farmers protesting the three farm laws to hold their tractor parade on selected routes only after the official Republic Day parade on the Rajpath concludes.

However chaos ensued as the farmers were were adamant of heading towards central Delhi.

Police baton charged farmers at Chintamani Chowk in Shahdara when they broke barricades and smashed window panes of cars. A group of ‘Nihangs’ (traditional Sikh warriors) clashed with security personnel near Akshardham Temple.

At Nangloi Chowk in west Delhi and at Mukarba Chowk farmers broke cemented barricades and police used tear gas to disperse them. The protesting farmers also reached Delhi’s ITO area, a few kilometres away from Parliament.

An official said police personnel used tear gas to disperse groups of farmers coming from the Singhu border point as they tried to hold a march on the Outer Ring Road much ahead of the allotted time.

Meanwhile, senior farmer Balbir Singh Rajewal said farmers were following the pre-decided route. No one from the Sankyukt Kisan Morcha went to the Outer Ring Road.

“We condemn violence against farmers, appeal to all to maintain peace,” Rajewal told PTI.

Numerous tractors bearing flags assembled at the border points of the national capital on Tuesday with men and women dancing on drum beats as locals gathered on both sides of the road showering flower petals them.

Security personnel have been trying to convince the farmers to stick to the plan of holding the tractor parade after the conclusion of the Republic Day parade at Rajpath.