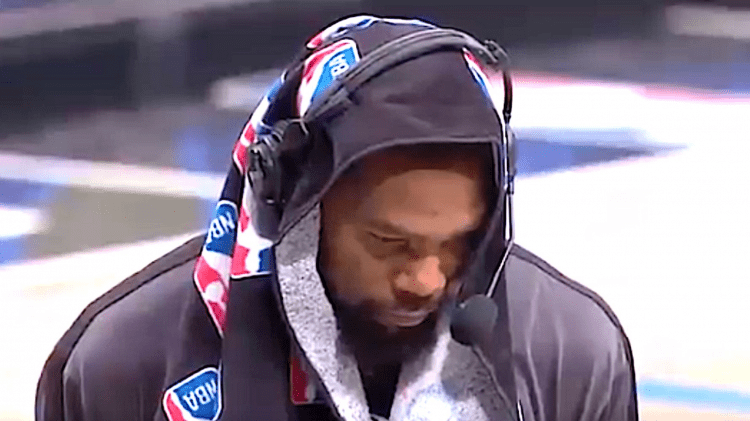 Brooklyn Nets forward Kevin Durant didn’t have much to say to TNT analyst Charles Barkley Tuesday after letting his game do the talking on the NBA’s opening night.

Durant scored 22 points in the Nets’ home victory over the Golden State Warriors in his first action since tearing his Achilles tendon as a Warrior in June 2019.

After the game, Barkley posed this question to the star:

“There was talk about you coming back for the playoffs last year. So, you’ve really just been working on your game trying to get back your timing and conditioning, really to be honest, correct?”

A stoic Durant, his bowed head draped in a towel, answered: “Yeah.”

Then the camera turned to Barkley for a priceless deadpan stare that cracked up his studio mates.

Charles Barkley’s reaction to Kevin Durant’s one word answer to his question.loooooool pic.twitter.com/KEHnG0wGa3

Ernie Johnson Jr. said it was the first time he had heard anyone give Barkley a one-word answer. “I don’t get sensitive about these guys,” said Barkley.

Durant was less than loquacious in other parts of the interview as well, prompting jokes and imitations of his terse responses from the TNT crew. “There was so much energy in there, wasn’t it?” Shaquille O’Neal snarked.

The NBA on TNT crew just roasted Kevin Durant’s postgame interview because they thought it was low energy 👀 pic.twitter.com/eA69Pz9Ylw

Barkley indicated that Durant’s apparent attitude may have stemmed from negative comments he made recently about Durant’s pal and teammate Kyrie Irving, For the Win reported. Barkley criticized Irving for not talking to reporters and told him: “Stop acting like you’re the smartest person in the world.”