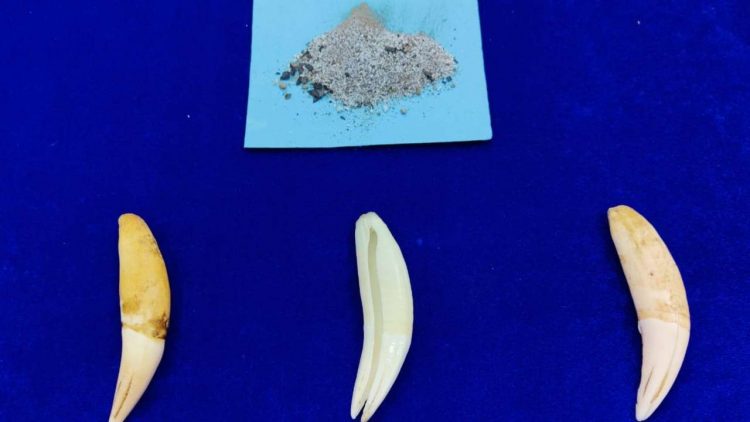 Chennai Air Customs officials seized three canines (frontal teeth) that measure over 3 inches or 8cm, that were hidden in an aircraft seat. Based on morphological examination Wildlife Crime Control Bureau (WCCB) officials say, the teeth belong to an animal in the Panthera genus. Panthera is a genus within the family Felidae that comprises spotted cats.

The animal tooth was found when officials rummaged Emirates flight EK-544 that arrived from Dubai on Sunday morning. The rummaging was carried on based on intelligence regarding the smuggling of gold, wildlife, and animal parts.

Cats’ canines were found covered in crumpled tissue papers that were concealed inside the hollow pipe of one of the aircraft seats. According to Officials, the first tissue ball contained two animal teeth, whereas the second one contained a single tooth along with some ash-like powder.

Panthera are listed under schedule l of Wildlife (Protection) Act, 1972 and are also listed under Convention on International Trade in Endangered Species (CITES) Appendix I. The three teeth and powder have been seized under Customs Act read with the Wildlife Protection Act 1972.

Big cat teeth are usually sold as lucky charm lockets and are quite expensive. The teeth and powder are to be sent to the Advanced Institute for Wildlife Conservation, Tambaram, Chennai for identification of species.