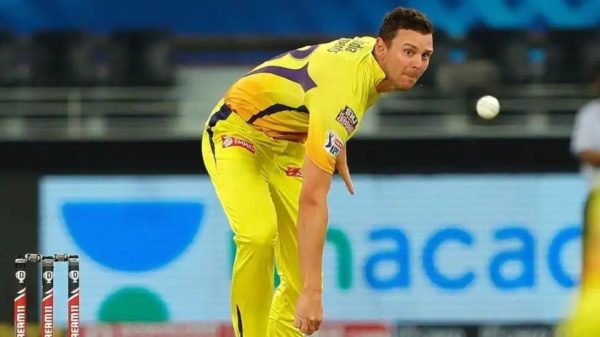 Chennai Super Kings fast bowler Josh Hazlewood has pulled out of the 14th edition of the Indian Premier League (IPL), days before the start of the tournament owing to bubble fatigue. He is the third Australian cricketer after Josh Phillipe and Mitchell Marsh to pull out of the cash-rich league.

The fast bowler from Australia has been a part of different bio-secure bubbles from August 2020 to January this year. With a busy international season coming up, the experienced cricketer wants to give himself “the best chance to be mentally and physically ready”. Josh Hazlewood, who played three matches for Chennai Super Kings in the IPL 2020, was expected to travel to India on April 1 to link up with the franchise but now has declined to play in the cash-rich league.

Speaking on his decision, the 30-year-old fast bowler said that the decision comes considering a long season of international cricket beckons in the next 12 months. Australia play West Indies next followed by the T20 World Cup schedule to take place in India and then the caravan shifts to the high-profile Ashes series. Josh Hazlewood wants to keep himself fit both physically and mentally and thus has decided to pull out of IPL 2021.

It’s been a long 10 months in bubbles and quarantine at different times, so I decided to have a rest from cricket and spend some time at home and in Australia in the next two months,” Hazlewood said to cricket.com.au.

“We’ve got a big winter ahead too. The West Indies is going to be a long tour, with Bangladesh (T20 tour) potentially thrown on the end of that. Then potentially the T20 World Cup leading into the Ashes, so it’s a big 12 months, as it always is with Australia, and I want to give myself the best chance to be mentally and physically ready for that. That’s the decision I’ve made, and it sits pretty well with me,” he added.

As soon as Josh Hazlewood pulled out, he began trending in the social media platforms as people felt Hazlewood pulled out to avoid bowling to Cheteshwar Pujara at the nets. Incidentally, Hazlewood and Pujara holding the wood over each other in Tests, it has become one of the most-talked-about rivalries in the format. Nevertheless, it’s safe to say that Pujara has held an upper hand over the Australian seamer due to his dogged resistance in the previous two editions of the Border-Gavaskar Trophy.

Speaking on the same lines, Chennai Super Kings have poked fun at Josh Hazlewood igniting the same topic which has gone viral on social media.