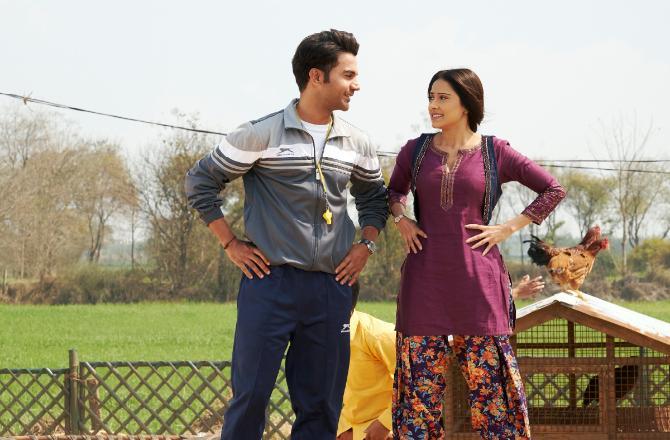 This film lost me at the twentieth minute itself, which is one of the advantages of watching a movie online (as against in the theatre), where you can pinpoint the exact moment on a timeline a picture dips. As do your interest levels for good.
Here’s what happens: Rajkummar Rao, up until then a PTI (Physical Training Instructor) in a school, and a regular Ramesh of sorts, walks into a park leading a bunch of Bajrang Dal type hate-activists, to harass couples on Valentine’s Day.

He picks on an elderly man as well, who’s with his wife—which should be okay (in his eyes), except he’s not convinced the young lady is indeed the wife she claims to be. So he shamelessly troubles them more—being the ‘incel’ lout he doesn’t come across as before, or after.

Unless one is attempting to normalise this behaviour, this should shine a light on a unique character that we rarely see in Hindi movies—they appear only in news reports—least of all as the bona fide Bollywood hero, no less. Only moments later the hero gets introduced to the heroine (Nushrat Bharucha), who happens to be the daughter of the same old couple he had tormented in the park.

Check out the trailer of Chhalaang trailer here:

She gives him a 30-second pep-talk on how some desis suffer from ‘Chaudhary complex’ –have no ‘aukaad’ as humans, but pretend to be Gods. You would think we’ll get fresher insights into his loveless, male, bigoted mind still (in case you’re interested, I recommend Snigdha Poonam’s non-fiction book, Dreamers). But, no, before you know it, the girl has begun to like him instead—for reasons beyond the lay audience’s comprehension.

They’ve smoothly transitioned into a proper couple of sorts—as casual hanging-out/dating would instantly imply in these parts of semi-urban Haryana. This isn’t the story of one-sided love. That’s not at all the conflict. Chhalaang just feels so long, from them on, that it took me five installments to get through it eventually.

Since I couldn’t care beyond a point, it mattered even less how the story (or lack of one) had segued/descended into a sports drama, wherein a new PTI reports to work/school, as the hero’s boss. They set up a sports tournament to decide, who’s better at the job. The hero allows the new coach (the always competent, Mohd Zeeshan Ayub) to pick the school’s best sporting talents in his team. Then he wonders why he did that—before training from scratch kids, who have no aptitude/interest in sport.

The lead-up to this championship/showdown is practically the whole picture. What’s at stake here again? If the hero can keep his PT-instructor job? Or leave, because he refuses to serve under another? No… Seriously.

Usually one forgives a film knowing where it’s going (in terms of an intended audience), even if we’re unsure where it’s coming from. Here it’s impossible to tell either. Can at best hazard a guess. There are peppy girls taking on boys, while the coach employs unconventional tricks to get minnows in campus sports to perform like maestros on the field. Were they looking to merge Nitesh Tiwari’s Dangal and Chhicchore into one movie?

Filmmaker Luv Ranjan has co-written and produced this film. And therefore the semi-rustic love-business in the air, and the slightly under-rated Bharucha in the female lead. They’ve done four movies together—Sonu Ke Titu Ki Sweety was their last. Hansal Mehta is the director, which explains Rao at the centre. They’ve collaborated on six movies before this—Shahid, Aligarh, Omerta, City Lights… None looks anything like this.

Among aspects that stand out is the old lady who briefly plays Rao’s mother. Singing praises for sportspersons from her state, she names Virender Sehwag as the greatest of ’em all to her son. He’s from Najafgarh in Delhi, the son tells her. Rao himself, I guess, is a Haryanvi, although from Gurgaon, which is now as good as the national capital. Imagine Sehwag’s equivalent in Bollywood having to play on a pitch/script this mucky. For God’s sake Haryana deserves better.

Also Read: Chhalaang: This Is How Nushrratt Bharuccha Aced The Haryanvi Accent

A trailer for The Courier is out. Directed by Dominic Cooke, the...
Read more

Bigg Boss Tharshan and Losliya to pair in KS Ravikumar’s next movie...

Two celebrities who were the contestants in the Bigg Boss...
Read more

Frequent movie cop Denzel Washington talks policing in America: ‘I have the...

Denzel Washington is not a cop, but he does often play one...
Read more

India has flattened its Covid-19 graph; 146 districts have no new cases for 7 days: Health minister