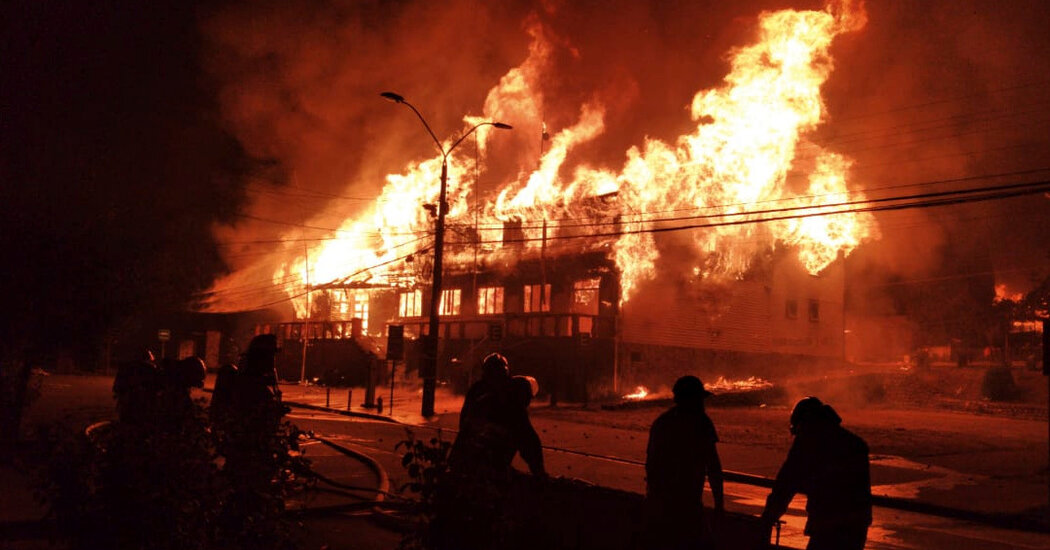 Buildings were burned during protests in a town in southern Chile on Friday, as angry demonstrators reacted to the fatal police shooting of a street juggler.

The shooting took place on Friday afternoon in the town of Panguipulli after police officers tried to check the juggler’s identity, ADN Radio Chile reported. The regional government later said on Twitter that the man had died as a result of the shooting.

By Friday night, video footage was circulating on social media that appeared to show burning buildings and barricades in Panguipulli. A local official, Carlos Durán, posted a video on Facebook showing several fires across the city, with thick plumes of smoke rising into the night sky.

News reports indicated that several government buildings were among those set afire. A photographer captured images of firefighters working to fight a blaze at the office of the town’s mayor.

There were also confrontations between protesters and the police in the capital, Santiago, hundreds of miles north of Panguipulli, The Associated Press reported.

Some Twitter users posted footage of the blazes in Panguipulli with the hashtag, “He didn’t die, they assassinated him.”

Others called for police reform or compared the episode to the death of George Floyd in Minnesota last year, which set of nationwide protests in the United States. Mr. Floyd, a 46-year-old Black man, died after being handcuffed and pinned to the ground under the knee of a white police officer.

“It happened in broad daylight in a moment of complete peace and without any threat to public safety,” the Chilean writer and literary critic Pedro Gandolfo wrote on Twitter. “A shameful act with a tragic result.”

ADN published on its website what it said was a video of the shooting in Panguipulli. The 25-second clip shows a man dressed in black standing at an intersection, holding what appear to be several knives and yelling at two police officers who have approached him with guns drawn.

After one officer fires two shots, the man chases the officer into the intersection. Three more shots are heard, and the man appears to fall to the ground.

ADN quoted a police official, Lt. Col Boris Alegría, as saying on Friday that the juggler had been carrying machetes and that the officer who shot him had acted in self-defense.

Just before midnight, the station reported that the officer who shot the juggler had been detained and that his arrest would be formalized on Saturday.

César Asenjo Jerez, a regional official, said in a short video uploaded to a government Twitter account on Friday evening that a police officer had used a service weapon in Panguipulli and that the authorities were investigating. An official who answered the phone early Saturday at the regional government’s headquarters said that no one was available to comment.