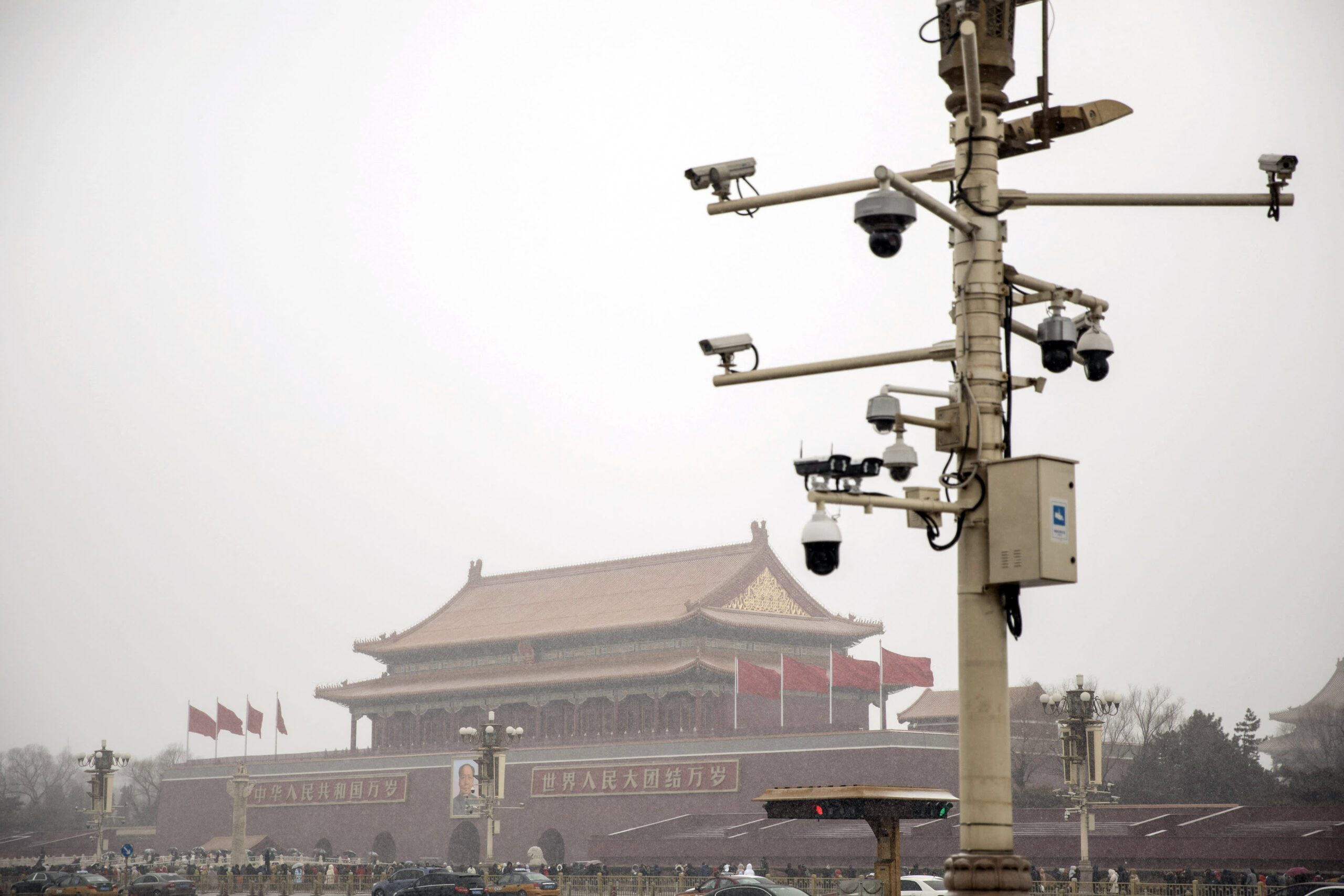 Surveillance cameras are mounted on a post at Tiananmen Square as snow falls in Beijing, China, on Thursday, Feb. 14, 2019.

GUANGZHOU, China — A new report reveals patent applications belonging to Huawei and a group of China-based artificial intelligence companies for systems that can detect people who are part of a Muslim minority group.

The ethnic Uighurs, who live mostly in China’s west, have been identified by the United Nations, United States, United Kingdom and others as a repressed group. Authorities allegedly use widespread surveillance technology to monitor the region’s Uighur population. The Chinese government denies mistreating Uighurs and says those camps are vocational training centers.

IPVM, a U.S.-based research firm that analyzes video surveillance technology, looked at patents in China related to systems that could be used to identify Uighurs’ faces. IPVM jointly published its research with the BBC.

One of the patents — jointly submitted in 2018 by Huawei and the Chinese Academy of Sciences, a government research agency — says the algorithms for the patented technology can be used to identify the attributes of a pedestrian, for example. One attribute that can be recognized is “race.” Uighurs are referenced as one “race” that can be detected by Huawei’s system.

That patent is for an “object attribute recognition method, device, computing equipment and system,” according to a translation of the filing from IPVM and verified by CNBC.

Huawei told CNBC it is “taking proactive steps” to amend its patent application.

“Huawei opposes discrimination of all types, including the use of technology to carry out ethnic discrimination. Identifying individuals’ race was never part of the research and development project. It should never have become part of the application and we are taking proactive steps to amend it,” a spokesperson for the company told CNBC by email.

“We are continuously working to ensure new and evolving technology is developed and applied with the utmost care and integrity.”

The Chinese Academy of Sciences did not respond to a request for comment. The Chinese embassy in Washington told CNBC in December that U.S. politicians create “disinformation” about the Uighurs in order to “contain China’s development.”

A United Nations report in 2018 described concerns that more than a million Uighurs and other minorities were being “held in so-called counter-extremism centers” in the Xinjiang region. Another two million had been forced into “so-called ‘re-education camps’ for political and cultural indoctrination” in Xinjiang, the report said.

Many of these camps operate based on what Amnesty International describes as a “highly restrictive and discriminatory” law that China claims is designed to combat extremism.

Last June, the UN again raised concerns about “the collective repression of the population,” highlighting the religious and ethnic minorities in Xinjiang and Tibet in its report.

Another patent highlighted by IPVM was filed by Chinese AI giant Megvii in 2019. It outlines an image recognition system that can help label images of people in a database.

One of the classifications it can recognize is ethnicity. Megvii’s system can be used to identify and label images of Uighurs, the patent states.

A Megvii spokesperson said the language in its patent is “open to misunderstanding.”

“The patent application pertains to portrait retrieval and technology to re-label images that have been labeled incorrectly in existing databases. All images and underlying databases are provided and held by third parties,” a Megvii spokesperson told CNBC over WeChat.

The company said its technology “is not a facial recognition solution, nor in any way represents an intention to develop ethnic identification solutions. Megvii has not developed and will not develop or sell racial or ethnic labelling solutions.”

However, the patent refers explicitly to classifying images of people “according to Han, Uighur, non-Han, non-Uighur” ethnicity, according to a CNBC translation of the document. The Han people are the ethnic majority in China.

“Megvii acknowledges that in the past, we have focused on our commercial development and lacked appropriate control of our marketing, sales, and operations materials. We are undertaking measures to correct the situation,” the company said.

It’s not the first time Huawei and Megvii have been linked to technology that can allegedly be used to identify Uighurs. Last month, IPVM claimed the two companies tested a facial recognition system that could be used to detect Uighurs and send alerts to authorities.

In 2019, the U.S. Commerce Department put Megvii on a U.S. blacklist known as the Entity List. American firms are restricted from exporting to companies on the list.

The U.S. government alleged at the time that the company and other entities added to the list “have been implicated in human rights violations and abuses in the implementation of China’s campaign of repression, mass arbitrary detention, and high-technology surveillance against Uighurs, Kazakhs, and other members of Muslim minority groups” in China’s Xinjiang region.

SenseTime, another AI company in China, filed a patent in 2019 for an image database search system that was described as a way to retrieve images in a database using certain attributes.

The patent describes how a user could use the word “Uighur” as a search attribute.

SenseTime called that reference to Uighurs “regrettable” and told CNBC via email that it had developed a code of ethics around artificial intelligence since the patent application was filed.

“This particular AI research … includes facial recognition of all ethnicities without prejudice. The reference to Uyghurs is regrettable and is one of the examples within the application intended to illustrate the attributes the algorithm recognizes,” a spokesperson told CNBC.

“It was neither designed nor intended in any way to discriminate, which is against our values. We will update the patent at the next available opportunity. Meanwhile, the application also pre-dates the AI Code of Ethics, which we developed later in 2019,” the company said.

Separate from the patent filings from AI firms, IPVM also revealed patents filed by Alibaba and Baidu that make reference to ethnicity.

A patent first applied for by Chinese e-commerce giant Alibaba in 2016 was for an “image set generation method, device and image recognition module” that includes “race, ethnicity” as possible “applications,” CNBC confirmed.

Uighurs were not mentioned in the filing.

“Racial or ethnic discrimination or profiling in any form violates our policies and values. We never intended our technology to be used for and will not permit it to be used for targeting specific ethnic groups,” an Alibaba spokesperson told CNBC, without addressing the reference to “race, ethnicity” that the company used in the patent.

Chinese search giant Baidu filed a patent in 2018 for an image recognition system. Ethnicity is one of the attributes its proposed system can recognize.

The company did not single out Uighurs or other specific ethnic groups in its patent. A Baidu spokesperson told CNBC that the patent’s reference to ethnicity was an attempt at a technical explanation of its technology, and the company drew a distinction between its proposed systems and existing systems.

“Baidu has never developed or permitted its technology to profile any ethnic group. Our existing facial recognition offering is not capable of detecting ethnicity as an attribute,” Baidu said in a statement via WeChat.

“When filing for a patent, the document notes are meant as an example of a technical explanation, in this case describing what the attribute recognition model is rather than representing the expected implementation of the invention,” Baidu said.

“We do not and will not permit our technology to be used to identify or target specific ethnic groups,” the company said.