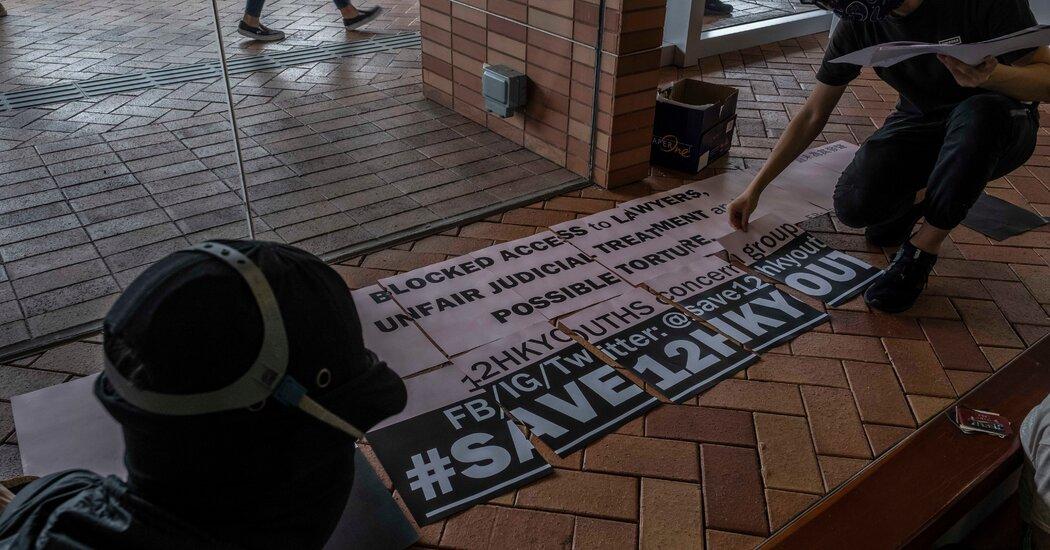 HONG KONG — Ten Hong Kong activists who were captured at sea while trying to flee to Taiwan in August were charged in mainland China on Wednesday with illegal boundary-crossing offenses that could put some of them behind bars for years.

The case has become a focal point for Hong Kong’s pro-democracy opposition, which, after months of intense protests last year, has been checked by a wide-ranging crackdown and the imposition of a tough national security law on the semiautonomous Chinese territory.

Eight of the group face charges of illegally crossing a boundary, which carries a sentence of up to one year in prison, prosecutors in the Yantian district of the mainland city of Shenzhen said in a statement. Two others, Tang Kai-yin and Quinn Moon, were charged with the more serious offense of organizing the escape attempt, punishable by up to seven years.

Another two, who are juveniles, are due to have a separate, closed hearing into their cases, but no charges were announced. The group ranges in age from 17 to 33.

As many as 200 protesters are believed to have fled to Taiwan, a self-governing island democracy that is claimed by China, but the route is increasingly monitored by the Hong Kong and mainland Chinese authorities. In attempting to flee prosecution in Hong Kong, the group captured at sea face likely prison sentences in mainland China, where the Communist Party controls courts and convictions in political cases are almost certain.

“Many activists have been forced to leave Hong Kong, but these are the most serious cases that demand the most of our concern,” said Eddie Chu, a former lawmaker who has helped the families of the group. “At the same time, I think people are trying to continue the movement through activities concerning the 12.”

The 12 have had little contact with their families and have been denied access to lawyers hired by their relatives. Instead, they have been required to accept lawyers assigned by the mainland Chinese government, family members and supporters in Hong Kong say.

Last month family members received letters from their detained relatives, but they said the texts appeared to have been scripted to tell them not to worry. One detainee, Wong Wai-yin, sent a letter asking family members to enter a guilty plea on his behalf to a charge in Hong Kong, Mr. Chu said.

Members of the group were under investigation or facing charges in Hong Kong in connection with the mass antigovernment protests last year, including rioting, manufacturing explosives and assaulting police officers. One person on the boat, Andy Li, had been under investigation on suspicion of violating the national security law imposed on Hong Kong by Beijing at the end of June.

The group left a small harbor in northeastern Hong Kong on Aug. 23 and was stopped by the Chinese Coast Guard about 45 miles southeast of Hong Kong Island. Because of increased surveillance, no smuggler was willing to take the group, and instead they piloted the speedboat themselves, according to people familiar with their plans.

Separately, Mrs. Lam watched on Wednesday as two dozen high-ranking officials swore an oath to Hong Kong and its local constitution. The oath-taking effort is part of a broader drive to ensure the loyalty of the city’s 180,000 civil servants, who will begin taking the oath in the coming days.

Last year, some civil servants joined in the antigovernment protests that swept the city, unnerving both Beijing and the Hong Kong authorities.