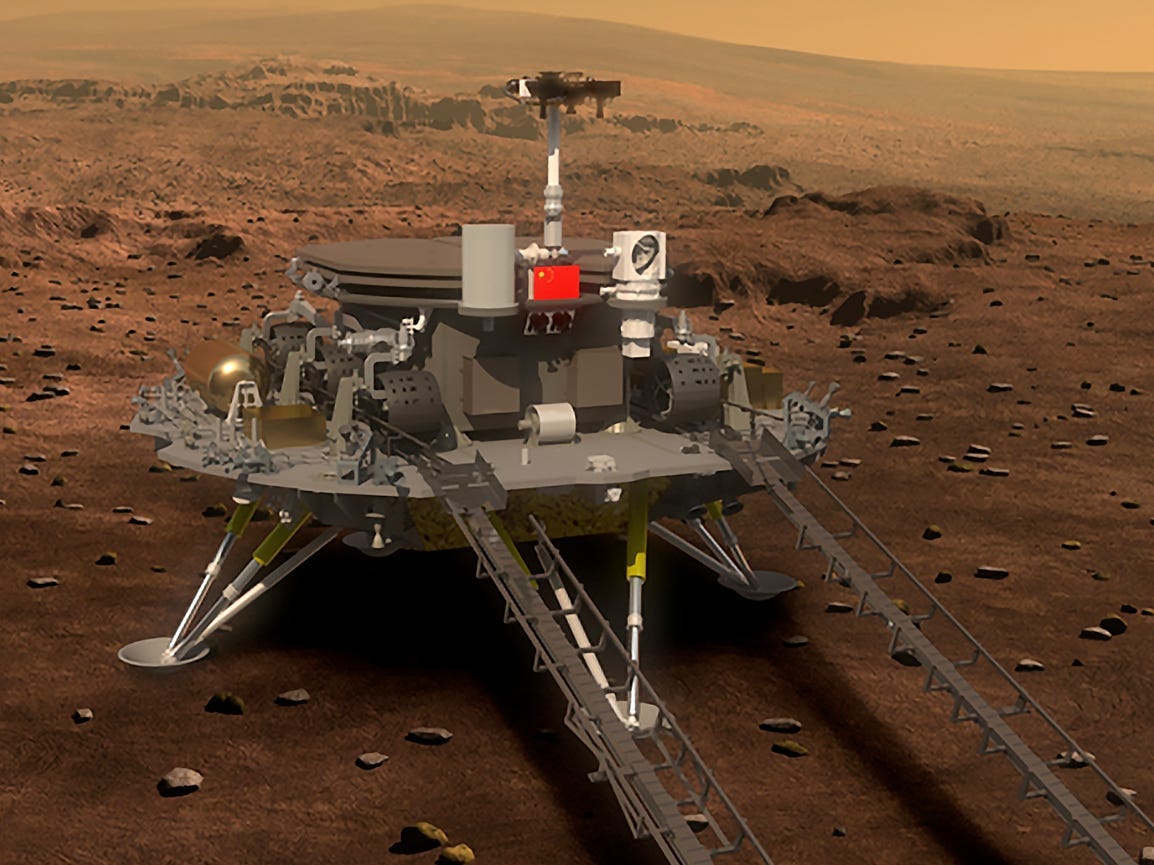 China has landed its first spacecraft on the surface of Mars, according to Chinese state media.

The mission, called Tianwen-1, or “questions to heaven,” is the first to send a spacecraft into the planet’s orbit, drop a landing platform onto the Martian surface, and deploy a rover all in one expedition.

If everything went according to plan, a gumdrop-shaped landing capsule separated from the Tianwen-1 orbiter on Friday evening and fell toward Mars. With the lander and rover safely tucked inside, the capsule plummeted through the Martian atmosphere, friction heating the material around it to temperatures exceeding 2,000 degrees Fahrenheit.

High above the red-dust Martian surface, a supersonic parachute had to deploy to slow the capsule’s fall. As the lander neared its destination, thrusters should have fired downward to help it decelerate. Then it should have lowered itself to the surface on a set of legs to absorb the impact.

China has not released details about the state of the lander or rover. But if everything is in good shape, the landing would make China the third nation to ever successfully put a robot on the Martian surface. It’s the first non-NASA Mars landing since the Soviet Union’s rover touched down in 1971.

Tianwen-1 launched in July 2020 and the spacecraft slipped into orbit around Mars in February. Landing was “the most challenging part of the mission,” the CNSA previously said. Only half the spacecraft that have ever attempted a Mars landing have succeeded.

Now, China’s first Mars lander and rover are sitting in the middle of Utopia Planitia, a vast field of ancient volcanic rock that may have extensive reserves of water ice beneath its surface. If space agencies like NASA someday send humans to Mars, water would be a crucial resource because it can both sustain astronauts and get broken down into hydrogen and oxygen for rocket fuel. It’s unlikely Mars-bound spaceships could carry enough water, oxygen, and hydrogen for the entire journey there and back.

If all goes well, the lander will deploy a two-track ramp for the six-wheeled rover to roll down onto Martian soil. The rover is called Zhurong, named for ancient Chinese mythology’s god of fire, according to the CNSA. It’s set to explore the region and search for its water ice with ground-penetrating radar.

The mission is also intended to help China prepare for a future attempt to return Martian rocks or dirt to Earth in the late 2020s.

“Landing safely on Mars is a huge challenge, especially for China’s first soft landing attempt,” Long Xiao, a planetary scientist at the China University of Geosciences, told National Geographic ahead of the attempt. “But it is a necessary step for Mars and deep-space exploration.”

The Zhurong rover has 90 days to explore Mars — for now

At 530 pounds, Zhurong is about the size of the Spirit and Opportunity rovers NASA landed on Mars in 2004. It could take more than a week to deploy the lander’s ramp and roll the rover onto Martian soil, journalist Andrew Jones reported for IEEE Spectrum. Then it will open its butterfly-wing solar panels to soak up the sunlight and charge its batteries.

Once the rover is on the ground, it has about 90 days to study Mars. That’s its official mission timeline, but Spirit and Opportunity had the same three-month window and ended up exploring Mars for six and 14 years, respectively.

The Tianwen-1 orbiter will continue circling the red planet for one Martian year (two Earth years), relaying data to Earth and taking photos. Its main goal is to “perform a global and extensive survey of the entire planet,” according to a journal article by Tianwen-1 scientists.

This will involve charting Mars’ geology, surveying its climate, and measuring its electromagnetic and gravitational fields.