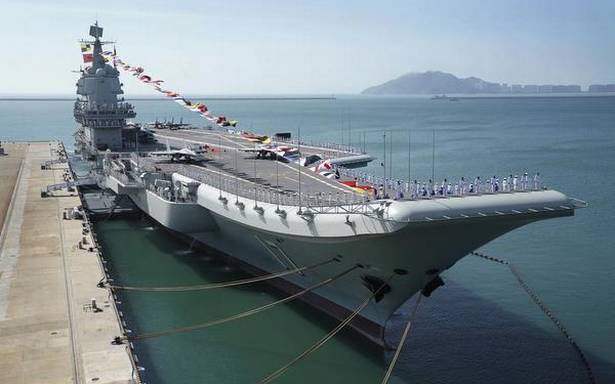 The launching of China’s third and largest aircraft carrier is likely to take place next year, State media in China reported on Wednesday, with a renewed push to take forward military modernisation plans amid a number of territorial and maritime disputes.

China one year ago launched its second aircraft carrier, the Shandong, which was the first to be built at home. It joined the Liaoning, which was developed by retrofitting a Soviet-era cruiser and commissioned in 2012. The Shandong, which has already been deployed in the Taiwan Straits and in the South China Sea, is only likely to be combat ready next year.

Two larger aircraft carriers are being built at the Jiangnan Shipyard near Shanghai, the first of which is likely to be launched in 2021, the Communist Party-run Global Times reported on Wednesday. This means it could be commissioned into service and be combat ready by 2023.

This will be China’s first that has an integrated electric propulsion system, an upgrade from its Soviet-modelled carriers, as well as an electromagnetic launch system for aircraft. Chinese strategic experts have previously said the PLA Navy is working towards six aircraft carriers, with two likely to be deployed in China’s near seas, including for the Taiwan Straits and the South China Sea, two for the western Pacific and two for the Indian Ocean.

Next year will also see the maiden flight of a new “aircraft carrier-based” stealth fighter, developed from the fifth-generation FC-31, Fu Qianshao, a Chinese military aviation expert, told the newspaper, while the J-20 stealth fighter jet with domestically developed engines would also make its debut next year.

The launch of the carrier would be one of the highlights for the People’s Liberation Army in 2021, a politically important year in China when the ruling Communist Party will mark its centenary in July, an event around which its launch may be tied.

China’s media identified the border with India, the Taiwan Straits and the South China Sea as hotspots, with tensions rising in 2020 and expected to continue in the new year.

An article published on Wednesday in the Global Times quoted several Chinese strategic experts who specialise in India as expecting tense relations to continue in the new year, although the situation along the Line of Actual Control (LAC) had, in the newspaper’s view, somewhat cooled with both sides holding several rounds of military-level talks aimed at disengagement.

Lin Minwang, a professor with the Institute of International Studies at Fudan University, told the newspaper “the Modi administration has no intentions of fixing ties with China”.

Talks to disengage have, however, been slow-moving and China hasn’t shown willingness to return to the status quo prior to this summer’s tensions, according to Indian officials. India has made clear that Chinese demands for India to withdraw first are untenable, and has called on Beijing to abide by past border agreements and to restore the status quo prior to the PLA’s multiple transgressions across the LAC starting in May.