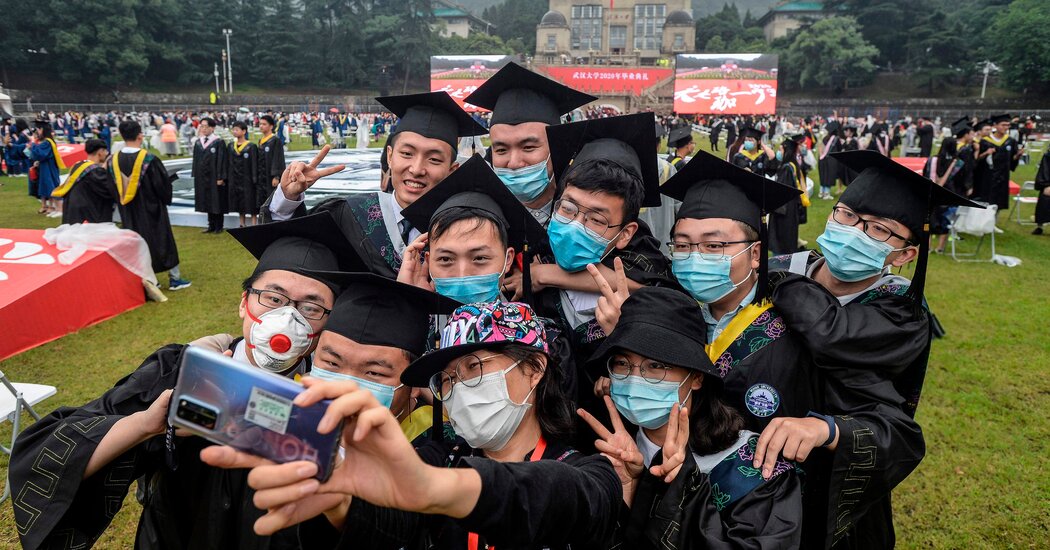 Graduation was fast approaching, but Yang Xiaomin, a 21-year-old college student in northeastern China, skipped her university’s job fair. Nor did she look for positions on her own. She didn’t think she had a chance of landing one.

“Some jobs won’t even take résumés from people with bachelor’s degrees,” said Ms. Yang, who, along with a record 3.77 million of her peers, instead took the national entrance exam for graduate school last month. “Going to graduate school won’t necessarily help me get a better job, but it will at least give me more choices of opportunities.”

China’s economy has largely rebounded from the coronavirus pandemic, with data released on Monday showing it has become perhaps the only major economy to have grown last year. Still, one area remains sorely lacking: the supply of desirable, well-paying jobs for the country’s rapidly ballooning count of university graduates. Most of the recovery has been fueled by blue-collar sectors such as manufacturing, on which the Chinese economy still relies heavily.

With the encouragement of the government, many students are turning to a stopgap solution: staying in school. China’s Ministry of Education announced at the height of the outbreak that it would order universities to expand the number of master’s candidates by 189,000, a nearly 25 percent increase, to ease unemployment. Undergraduate slots would also increase by more than 300,000.

Nearly four million hopefuls took the graduate entrance exam last month, an almost 11 percent increase from the year before and more than double the number from 2016.

School is a common landing pad worldwide during times of economic uncertainty, but in China, the push to expand enrollment lays bare a long-running problem. Even before the pandemic, the country’s graduates complained that there were not enough suitable jobs. Official employment numbers are unreliable, but the authorities said in 2014 that unemployment rates for the college-educated two months after graduation were as high as 30 percent in some areas.

As a result, many Chinese have worried that the expansion of graduate slots will increase already fierce competition for jobs, dilute the value of advanced degrees or postpone an unemployment crisis. “Are graduate students under siege?” the headline of one state-controlled publication read.

The Communist Party in recent years has frequently linked the prosperity of college graduates not only to economic development, but also to “social stability,” worrying that they could be a source of political unrest if their economic fortunes falter.

But in seeking to keep unemployment down for those workers, the government must also be careful not to inflate their hopes, said Joshua Mok, a professor at Lingnan University in Hong Kong who studies China’s education policy. “It may create a false expectation for those highly skilled people,” Professor Mok said. “The Chinese government has to watch out about how to manage these sorts of expectations.”

The government’s expansion push is part of a broader, decades-long effort to increase university enrollment. In 1997, China had fewer than 3.5 million undergraduate and graduate students, according to official statistics. In 2019, there were more than 33 million, not counting online schools and adult higher education institutions.

Per capita, the number of advanced degrees still lags that of developed countries. There are about two graduate students for every 1,000 Chinese residents, according to government statistics, compared with about nine in the United States. Still, China’s economy has not kept up with the rapid expansion of higher education, leaving each round of new graduates competing for a small pool of jobs.

The pandemic has exacerbated those concerns. A report by Zhaopin, China’s biggest job recruitment platform, found that 26.3 percent of 2020 college graduates were unemployed last June. Jobs for fresh college graduates fell 7 percent from the same time the year before, the report said, while the number of applicants surged nearly 63 percent.

“What the current Chinese economy needs is more people that have technically oriented qualifications, rather than only general academic degrees from universities,” Professor Mok said. “There’s a mismatch of skills.”

The competition has led many students to feel that an advanced degree is practically mandatory. Ms. Yang, who is studying land resource management, said she had long known she would attend graduate school because her undergraduate degree alone was “too low quality.”

She knew that competition for admission would increase after the outbreak. “If you choose to take the master’s exam, you can’t be afraid of there being a lot of other people,” she said.

Others have been less accepting. On Weibo, where the hashtag “what do you think of the graduate exam craze?” has been viewed more than 240 million times, many have worried that teaching quality or the value of their degree would go down as enrollment shot up.

Others have asked whether the government was simply putting off a surge in unemployment for a few years. Some worried that companies would raise their application standards higher. Still others wondered whether there would be enough dormitories to accommodate all students.

“Enrollment expansion is not just a matter of arithmetic,” one person wrote. “We must think about how this will affect the overall development of education and society.”

The concern reached such a pitch that it prompted a government response. Hong Dayong, a Ministry of Education official, acknowledged at a news conference last month that some universities had experienced teacher shortages as graduate programs grew. But he said that officials would introduce tighter quality-control measures and that the government would encourage universities to offer more vocationally focused master’s degrees in order to help graduates find jobs.

The government has also ordered state-owned enterprises to hire more recent graduates and subsidized companies that hire them.

Some advice has been blunt. Chu Chaohui, a researcher at China’s National Institute of Education Sciences, told the state-owned Global Times tabloid that graduates should lower their sights. As they did so, they would find jobs in sectors such as food or parcel delivery, he said.

Inflated expectations may indeed be heightening competition for jobs. According to Zhaopin, the recruiting website, there are about 1.4 positions available to college graduates for each applicant, even after the epidemic. But many graduates look only in the biggest cities or expect high salaries, Professor Mok said.

Still, some students said the government’s encouragement of the pursuit of higher education would only strengthen those expectations.

“Everyone has their own ambitions, even a little bit of arrogance,” said Bai Jingting, an economics student in eastern Anhui Province. Ms. Bai, 20, said she had visited her college’s job fair in the fall but hadn’t found any positions that seemed exciting enough. “Since I decided to apply for graduate school, of course I will think about how it should be easier to find a job afterward, and easier to find a job that I want.”

Further fueling the competition is the fact that many students who had planned to study or work abroad no longer have that option.

Before the pandemic, Fan Ledi, a recent graduate from the western province of Qinghai, had planned to move to Ireland for a one-year master’s program in human resource management. He wanted to work there afterward, excited by the prospect of learning about a new culture.

But he has scrapped that plan and will look for jobs at home when he finishes his program, which he is completing online because of travel restrictions.

“Irish people are having trouble finding work, let alone foreigners,” Mr. Fan said. He added that he was worried about discrimination, as anti-China sentiment rises in many Western countries. “I think going abroad to find work right now is decidedly impossible.”

He is already attending job fairs, though he will not finish school until November. Recruiters tell him he is too early, but he asks them to take his résumé anyway.

Given the jostling for both jobs and graduate school spots, Ms. Bai, in Anhui, shrugged at the government’s increase in master’s seats. Her major, economics, was one of the most popular, she said, and competition would always be fierce.

“How much can enrollment expand?” she said. “It’s just a drop in the bucket.”