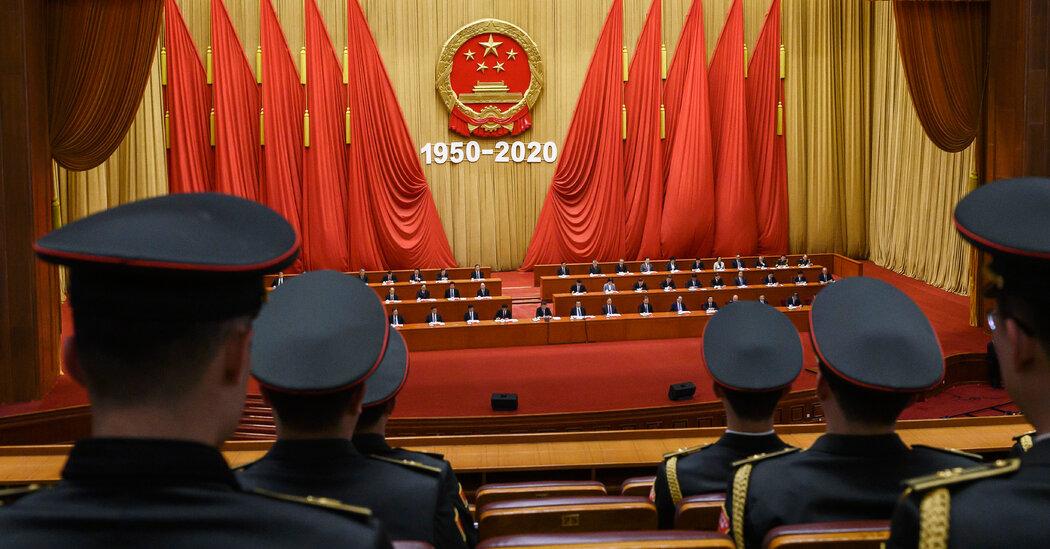 In one Beijing artist’s recent depiction of the world in 2098, China is a high-tech superpower and the United States is humbled. Americans have embraced communism and Manhattan, draped with the hammer-and-sickle flags of the “People’s Union of America,” has become a quaint tourist precinct.

This triumphant vision has resonated among Chinese.

The sci-fi digital illustrations by the artist, Fan Wennan, caught fire on Chinese social media in recent months, reflecting a resurgent nationalism. China’s authoritarian system, proponents say, is not just different from the West’s democracies, it is also proving itself superior. It is a long-running theme, but China’s success against the pandemic has given it a sharp boost.

China’s Communist Party, under its leader, Xi Jinping, has promoted the idea that the country is on a trajectory to power past Western rivals.

China stamped out the coronavirus, the messaging goes, with a resolve beyond the reach of flailing Western democracies. Beijing has rolled out homegrown vaccines to more than a million people, despite the safety concerns of scientists. China’s economy has revived, defying fears of a deep slump from the pandemic.

“In this fight against the pandemic, there will be victorious powers and defeated ones,” Wang Xiangsui, a retired Chinese senior colonel who teaches at a university in Beijing, averred this month. “We’re a victor power, while the United States is still mired and, I think, may well become a defeated power.”

The firm leadership of Mr. Xi and the party has earned China its recent success, say newspapers, television programs and social media.

“Time to wake up from blind faith in the Western system,” said a commentary in the state-run China Education News last week. “Vicious partisan fighting has worsened in certain Western countries, social fissures have deepened, and a severe social crisis is brewing.”

The theme of China as triumphantly vindicated against critics also has real public appeal these days, including among the youth, as reflected in a stream of online commentary and the work of artists like Mr. Fan, who has described his style as “People’s Punk.” In Mr. Fan’s depiction of communist Manhattan, displayed on the ArtStation website, a caption describes a tour guide as saying that Asia and Europe are where the future is.

“To take in the changes of history and feel the afterglow of the imperialist era,” the guide says, “head to North America.”

China’s current swaggering mood could add to the challenges facing Joseph R. Biden Jr. when he takes office as president. President Trump’s defeat in the election has done little to ease Chinese suspicion of the United States, said Liu Jianqiu, a businessman and online commentator, in a telephone interview.

“I think China has gained the psychological edge,” said Mr. Liu, in his 40s, who described the pandemic as a turning point in his attitudes. “The performance of the West was completely out of my expectations and shifted my thinking even more — the facts prove that the American system really has no superiority.”

Combative national pride surged in China in the run-up to the Beijing Olympics in 2008, and after the United States bombing of the Chinese embassy in Belgrade in 1999. Now there is a sharper sense that the Western powers are in perhaps irreversible decline, and that the pandemic has confirmed China’s ascent.

“Most ordinary Chinese people previously were more admiring of the United States, but in recent years, the advantages of the Chinese system have become clearer to them,” said Jin Canrong, an international relations professor at Renmin University in Beijing who has become a popular commentator under the nickname “Commissar Jin.” “There’s greater self-confidence.”

China’s diplomats and its state-run media have responded to criticism from Western governments with scornful disdain. Chinese supporters of a more muscular foreign policy call for hitting back against Western critics, especially in the wake of the pandemic.

Le Yucheng, a Chinese vice minister of foreign affairs, said in a speech last week that China was not spoiling for fights, but he also warned other governments not to underestimate its resolve to push back against criticism.

“Faced with this suppression and containment without scruples,” Mr. Le said, “we’ll never swallow our pride or stoop to compromise.”

Critics worry that hubris could lead China to overestimate its strengths and misjudge how far it can push the United States and other Western countries.

“These ideas aren’t sealed off in the halls of Zhongnanhai,” the Communist Party leaders’ headquarters in Beijing, said Julian Gewirtz, a senior fellow at the Council on Foreign Relations who has written about Chinese perceptions of American decline.

“Their triumphalism is shaping both popular nationalism and official diplomacy,” he wrote in an email. “It is fueling ever-sharper demands for deference to China’s wishes.”

Online, Chinese commentators have plumbed the depths of history to capture the current moment. Some likened the United States to the crumbling British Empire of the last century, overstretched and exhausted.

Others are reaching back further, comparing America to China’s own Ming dynasty, which crumbled in the 1600s under the weight of corruption, insurrections and invasions. In this view that spread online this year, China should take the role of the “barbarian” Manchu armies who — in the commentators’ vivid, not-always-accurate retelling — swept over the Asian steppes, breached the Great Wall, and crushed the Ming rulers.

Modern-day China must act like the Manchu forces, advocates of the analogy say, and prepare to “break through” a ring of geopolitical hostility by dominating vital seas around China.

Geremie R. Barmé, a Sinologist in New Zealand who has followed the rise of “break-through studies” — rùguānxué in Chinese — says the historical comparisons reflect anxiety “about China’s great nation status and its place in the world.”

“The underpinning is that China is morally superior — we the Chinese people under the Communist Party — because we have none of the failings of America,” he said.

China’s leader, Mr. Xi, has not commented on the recent pronouncements of American decline. But he sees China and the United States as locked in ideological rivalry. Since coming to power in 2012, he has called for Chinese schools, textbooks and websites to inoculate youth against Western values that could erode party rule and the country’s “cultural self-confidence.”

“Our schooling must never nurture wreckers or gravediggers of socialism,” Mr. Xi said in a speech in 2018 that was recently published in a book of his comments on ideology.

Some warn that China risks underestimating the strengths of the United States. In recent months, Chinese scholars have debated how Beijing should handle the post-Covid world, with a good number urging restraint as the best way to win lasting influence.

“China’s high-volume nationalism at home is making the United States feel that China is getting aggressive,” Xiao Gongqin, a historian in Shanghai wrote in an essay that was published last month, prompting wide discussion.

The United States is far from the only country feeling the lash of official and public anger from China. Australia has drawn China’s ire for criticizing Beijing, initiating laws aimed at reducing Chinese government influence-building efforts in Australia, and urging an investigation into the origin of the pandemic — a touchy subject in Beijing.

Last month, a Chinese foreign ministry spokesman tweeted a Chinese artist’s fabricated image of an Australian soldier poised to slit the throat of an Afghan child. Australia’s prime minister, Scott Morrison, demanded an apology from China over the image, which was a reference to an inquiry by the Australian military that found that its troops had unlawfully killed more than three dozen Afghan civilians.

The Chinese foreign ministry scoffed at Mr. Morrison’s demand, and the artist who created the image, Fu Yu, created another one mocking the Australian leader. Mr. Fu, who works under the name Wuhe Qilin, had made a reputation with his scathing images of the United States as a blood-soaked, irrational medieval realm.