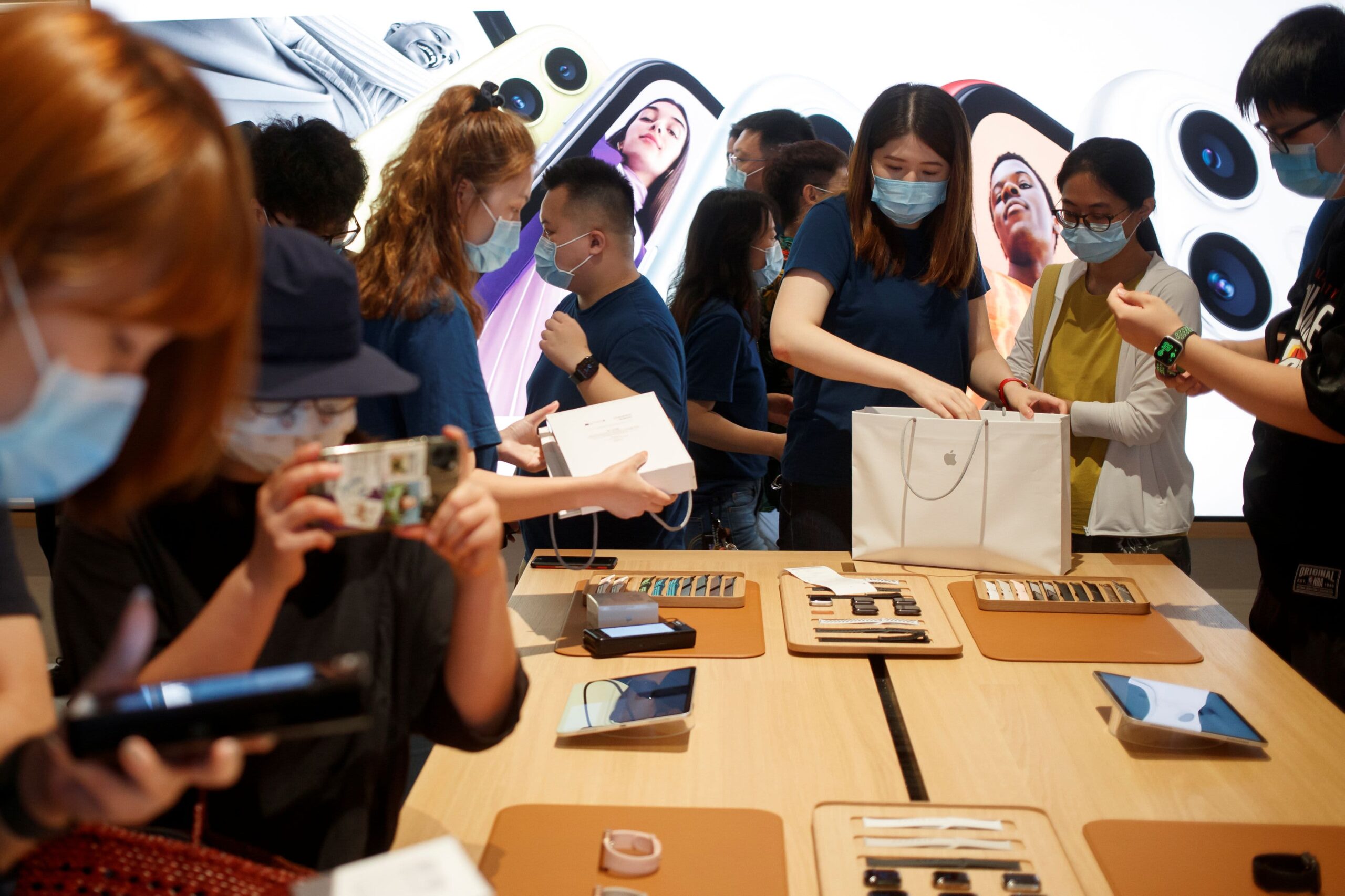 People purchase Apple products in the new Apple flagship store on its opening day following an outbreak of the coronavirus disease (COVID-19) in Sanlitun in Beijing, China, July 17, 2020.

BEIJING — Chinese consumer spending is set to more than double in 10 years, with an emphasis on services rather than goods, Morgan Stanley analysts predicted in a roughly 200-page report released Wednesday.

By 2030, China’s private consumption is set to reach $12.7 trillion, about the same amount that American consumers currently spend, the report said. That figure is also up from Morgan Stanley’s forecast three years ago of $9.7 trillion, and the $5.6 trillion Chinese consumers spent in 2019.

The analysts predict disposable income per capita will likely double from $6,000 a year to $12,000 in 2030 as more people grow older and leave the work force.

Significantly, the Morgan Stanley analysts expect future Chinese spending will go into new categories of growth over the next 10 years as the age groups with the most purchasing power have families or retire.

“Material shifts in consumption patterns are likely to take place, from young consumer focused to household demand driven, which will incrementally require a higher proportion of services in consumption,” the report said.

The 35 to 45 age category will likely increase by 25.3 million people, or about the current size of Australia, and those age 55 and above is set to increase by 123.9 million, or about the current population of Japan, the report said. The analysts added the size of other adult age categories will likely decline as a result of China’s years-long ban on having more than one child and an overall drop in birth rates.

“We think the average Chinese consumer will be a driver of change rather than merely a recipient of Western consumption trends,” the authors added. “Part of that change will be informed by certain cultural values and consumption needs to support those values. These include strong family ties and the prioritization of education.”

Morgan Stanley’s prediction of $7 trillion more in spending over the next several years means Chinese private consumption will likely grow by about 7.9% a year in the next decade, “one of the highest levels in the world,” the report said.

But uncertainties remain as the global economy struggles to handle the coronavirus pandemic.

While China’s economy overall recovered quickly from the initial shock of the pandemic, personal spending took longer to bounce back. Retail sales contracted by 3.9% last year despite a 2.3% increase in national GDP. On a monthly basis, sales returned to growth in August and grew 4.6% in December from a year ago.

The Morgan Stanley analysts listed several other developments that could prevent Chinese from spending as much as they predict.

Authorities could aggressively tighten the availability of credit for consumers, the report said. Chinese might also be inclined to save more if increased automation and other technological applications result in larger-than-expected job losses, or if the government isn’t able to significantly improve social security plans to help cover large personal costs.

Chinese households mainly save for education, retirement, and healthcare, the report said.