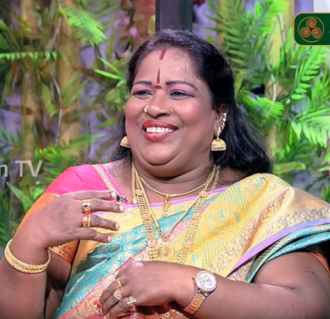 Chinnaponnu is an Indian Tamil Folk artist and playback singer, mainly in Tamil. She is from Sivagangai, Tamil Nadu, India. In 2004, she had sung a Tamil song, “Vazhthuren Vazhthuren” in the hit movie Chandramukhi, which became a stepping stone in her career. Her major hit song “Nakku Mukka” was honored with the Kannadasan Award for Best Folk Singer in a Tamil movie. Chinnaponnu’s this song also featured in the Bollywood hit film ‘The Dirty Picture’.

She won the ‘Edition Award 2010’ for the song “Theeka Theeka” in the Tamil movie ‘Suriyan Satta Kalloori’.

In 2012, Chinnaponnu made entry in the Telugu film industry with the song “Pattuko Pattuko” in the move Bus Stop.

In the year 1990, Chinnaponnu was married to Selva Kumar, who is a composer and percussionist.

During the Oru Kadhai Sollattuma task, each and every contestant had to share their life journey to which other contestants had to response to their story through emojis such as like, dislike, heart. Chinnaponnu also narrated her story as the part of the task. She spoke about her struggling due to poverty during childhood. She got married to a person with her sheer love for folk art. She added that how they had to travel from one palce to other with their new born baby to perform in shows. She also regretted for not taking care of her parents.

Chinnaponnu was nominated for the 2nd week elimination process along with the other housemates. In the 2nd week, Priyanka Deshpande, Abhishek Raaja and others were seen discussing about the goof-up of not introducing Chinnaponnu respectfully during the special performance held for Vijayadashami festival. This hurted Chinnaponnu a lot.