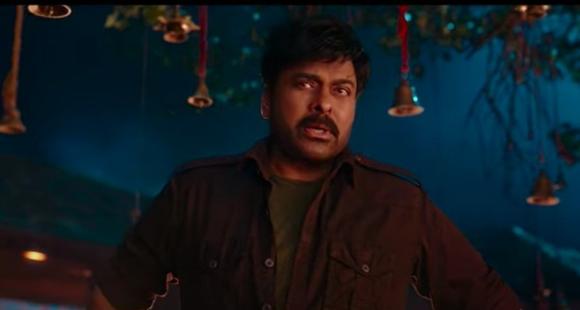 Directed by Koratala Siva, Acharya has Chiranjeevi in the lead role, while Kajal Aggarwal is the leading lady. Ram Charan will be seen playing an extended cameo.

As the clock ticked 4:05 pm, the fans of Megastar Chiranjeevi bombarded Twitter with posts as the makers of Acharya gave them an amazing treat. After a long wait, the makers of the film have released the teaser directed by Koratala Siva. Other than a power packed ensemble of star cast including Ram Charan and Kajal Aggarwal, the film has Mani Sharma on board to compose music and the teaser’s BGM is absolutely goosebumps inducing. It was announced by the director a couple of days back that the teaser will be released today.

Earlier this morning, the makers shared a short gif, where a glimpse of Chiranjeevi’s hand, holding on to a red scarf was shown.

Also Read: Venkatesh Daggubati’s Narappa to hit the big screens on May 14; Take a look at the official poster

It is reported that Pooja Hegde will be seen as the love interest of Ram Charan. However, an official announcement regarding this news has not been made yet. Following the lockdown for COVID 19, the makers resumed the shooting a couple of months back after the government relaxed the lockdown norms. It was also revealed that Ram Charan had joined the sets of the film to shoot his portions.

Back to Top
Close Add post
X
Rapper Mulatto Reveals She’ll Be Changing Her Name In The Coming Months…GossipsMulatto, 22, has been making waves in the rap game ever since she came on to the scene with her debut record, Queen of Da Souf. According to Hot New H…