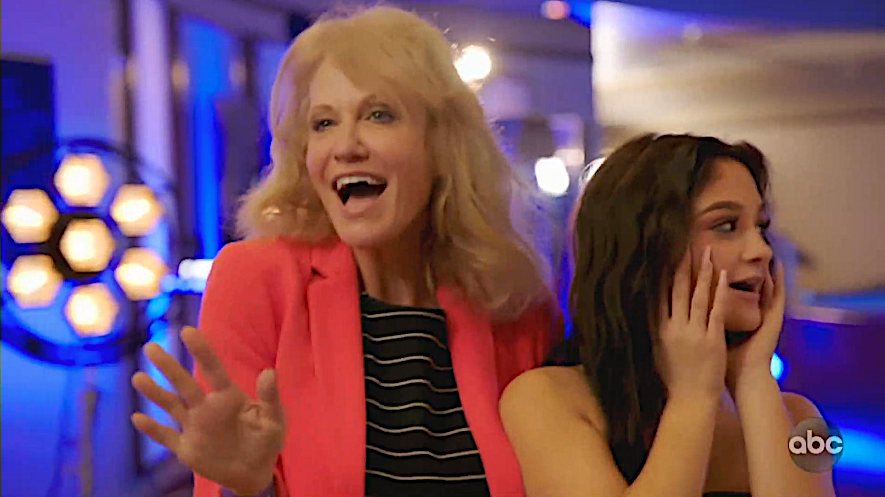 Back in February, Claudia Conway’s audition on the American Idol Season 19 premiere drew immediate outrage. Many livid viewers and pundits accused the show of exploiting a vulnerable young girl and her “family drama” for ratings, as well as being complicit in helping Kellyanne Conway, the problematic former White House senior counselor and Claudia’s allegedly abusive mother, rehabilitate her post-Trump public image.

Just two days after the controversial season premiere, the New York Post’s Page Six reported that ABC executives had been blindsided by this intense criticism, had gone into “crisis mode,” and were already “rethinking how they are going to position Claudia and Kellyanne with promotion. They were big on putting Claudia in all of the promos, but now they are thinking of not putting as much focus on that… to not make as big a deal of her being on the show and focus on other contestants.” (A representative for Idol did not respond to Yahoo Entertainment’s request for comment.)

This Sunday, as Season 19 kicked off Hollywood Week, it did seem like Claudia’s participation had been duly downplayed by overtime-working ABC editors. Footage that had been teased earlier in the season, of the newly brunette Claudia working one-on-one with in-house mentor Bobby Bones (see screenshots from the Feb.14 premiere below), did not make it to air — even though Bobby had told TV Insider that he’d had “a lot” of “interesting” interaction with Claudia in Hollywood. Claudia also didn’t show up this Sunday until well into the episode’s second hour.

But Claudia did make the final edit, with a decent amount of screentime, as did her polarizing mother Kellyanne — who cringe-inducingly serenaded Claudia with known anti-Trump activist Alicia Keys’s empowerment anthem “Girl on Fire” in the Dolby Theater lobby, and in the process understandably reignited the backlash.

am i the only one that CHOKED when kellyanne conway walked out during claudia’s part on @AmericanIdol tonight??? i’ve seen videos of this woman verbally, emotionally and almost physically abusing her daughter…and we’re pretending she’s now supportive mom of the year?? HELLO???

Kellyanne Conway for the past several years: “Claudia you are such a disgrace”

Kellyanne Conway when Claudia does well on American Idol: “this🗣 girl🗣 is 🗣on 🗣fiiirrrrree🎶👏🙌👩‍👧🥰❤️”

@AmericanIdol is absolute garbage for making Claudia Conway say what she said about her family with different beliefs when we have heard how she actually feels and how they treat her. STOP SHOWING KELLYANNE IN A GOOD LIGHT #Idol

The Conway family if you keep giving them airtime. Claudia is fine but plz no more George or Kellyanne

I stopped watching American Idol for a good reason. Claudia Conway was messy on the stage and it’s sad they’re keeping her for her celebrity. I’m assuming that’s what it is. I think it’s an insult to those who sang better to let her through but not one of them.

This whole Claudia Conway on American Idol thing is supremely fucked up. They keep dragging out the reanimated corpse of Kellyanne Conway to make her seem like a quirky mom w/ a difference of opinion to her daughter instead of the abusive, gaslighting monster she is.

As for Claudia’s day one Hollywood Week performance, of Bishop Briggs’s “River,” it was strong enough for the judges to “cast their ballots,” as host Ryan Seacrest cheekily worded it, in her favor. It was a big, bold, attitudinal song to take on, and Claudia (who does have some raw talent and TikTok-trained star quality) for the most part handled it, indicating that Bobby Bones’s mentoring sessions, despite ending up on ABC’s cutting-room floor, had gone well. At first it seemed like Claudia, who was competing in the crowded and cutthroat “Pop” category during Sunday’s Genre Challenge, was about to be sent home — when judge Katy gently told her, “It will happen when it’s meant to happen” — but Claudia expressed gratitude that Katy ultimately “believed” in her. However, as Season 19 continues apace, I do wonder how much farther Claudia can go… and if the Idol powers-that-be are even willing to let her go much farther.

Anyway, while Claudia squeaked through, with this being such a fiercely competitive season, some other early standouts had their time in Hollywood cut short, like country-warbling maid Christian McGucken (who still couldn’t keep time or keep her nerves in check); Hawaiian pop singer-songwriter Ammon Olayan (whose younger sister Liahona did make it to the next round); homeless single mother Vahhley; cystic fibrosis survivor Brianna Collichio; Erika “E.T.” Perry (a self-described “lunatic” who pitched a full-on Karen-style “bitch fit” upon being rejected); cruise ship singer Celeste Butler; bullied teen Tryzdin Grubbs; DJ Johnson (whose shaky “Rise Up” cover wasn’t as moving as her original audition song about her absentee mom); wannabe-Pitbull prankster Yurisbel (who never should’ve gotten a Golden Ticket in the first place); and Alabama cheerleader Cameron McGhar. These eliminations made sense, as many of these not-ready-for-prime-time contestants were so nervous that they still needed the judges to coach them through their performances. (Some of them made Claudia Conway looked like a seasoned pro.) But Cameron’s exit effectively ended a budding showmance between her and suitor Alex Miller — which was too bad, as those two country cuties had the potential to be this season’s Maddie Poppe and Caleb Lee Hutchinson (or Gabby Barrett and Cade Foehner).

Season 19 is packed with so much talent, in fact, that Sunday’s episode also breezed through many contestants that I’d assumed would receive at least as much Hollywood Week screentime as Claudia — like Alyssa Ray, Jason Warrior, Ronda Felton, Hannah Everhart, Deshawn Goncalves, Benson Boone, Calvin Upshaw, and Ash Ruder. Instead, Ryan merely mentioned in passing that they’d advanced to the next round, if he even mentioned them at all. At a lightning pace on Sunday, we saw other contestants rounded into genre-specific brackets (Indie-Folk, Pop, Rock, R&B, Soul, and Country, although these genres weren’t very well-defined) and perform one after the other after the other.

Think you know American Idol? Test your at-home trivia chops in augmented reality with a round of ‘Guess the Idol’:

As mentioned above, the Pop group was overcrowded, and while Ryan explained that no quotas were in place for any of the genres, the singers in this category did seem at a disadvantage. But along with Claudia, some other contestants who gave imperfect performances did manage to survive, like 17-year-old Liv Grace Blue (who took too many melodic liberties with “Ain’t No Sunshine”) and Mary Jo Young (whose strained and try-hard “Falling” wasn’t as beguiling or natural as her first audition). Pop standouts included the adorable and affable Liahona Olayan bringing the fire with Meghan Trainor’s “No Excuses”; piano ingenue Laila Mach getting vulnerable on an aching rendition of Clinton Kane’s “Fix It to Break It”; another 15-year-old, Ava August, doing a winsome cover of the White Stripes’ “We Are Going to Be Friends”; and Andrea Valles, whose first audition had been underwhelming, really stepping it up with Sam Smith’s “Lay Me Down.” But the two biggest Pop surprises were Viking crooner Anthony Guzman, who “dialed back the outfit a bit” and showcased his legitimate pipes on the standard “Fever,” and ex-boy band member Colin Jamieson, whose silky “Sex on Fire” was so much better that his breath-control-challenged first audition that he didn’t even sound like the same person.

The Country category was also incredibly competitive. Cameron McGhar’s would-be love interest Alex Miller charmed with an old-school, Opry-style “Freeborn Man” (“Country just arrived!” declared judge Luke Bryan); 16-going-on-60-year-old singer-songwriter and all-around deep thinker Caleb Kennedy stunned with a brooding “Whiskey and You”; and I was delighted to see the return of last year’s Drake McCain, a pleasant and random surprise since his comeback audition from this season wasn’t even shown. There were two iffy, anxious contestants that I thought might get cut along with Cameron and Christian — new dad Cecil Ray, who flubbed his first cue and was still doing that distracting hand-gesturing thing, and hard-luck forklift operator Chayce Beckham, whose voice, according to judge Lionel Richie, needed more “animation.” But both men were given the benefit of doubt.

There are many detractors that claim that rock ‘n’ roll is dead, and maybe that’s true, because Rock was the least crowded category, with only nine singers total. And to call them “rock” at all was a bit of stretch. But regardless of classification, no one could deny the charm of “the modern-day Mr. Rogers,” Beane, flaunting some Jake Shears-style showmanship on “Benny and the Jets,” or the sweetness of Althea Grace dedicating Marris Morris’s “Girl” to her liver-transplant-survivor toddler daughter. Casey Bishop, the teen who’d originally auditioned with Motley Crüe’s “Live Wire,” was really the only singer in this bracket who rocked this week, this time with “House of the Rising Sun” — a blustery and passionate performance that certainly didn’t have Luke backing away from his very early prediction that Casey could be the Season 19 winner.

There was definitely some blurred-lined overlap between the Rock and Indie-Folk brackets. It could be argued that raspy schoolteacher Christina Daughtery, Hunter Metts building the tension on an acoustic Billie Eilish cover, Cassandra Coleman channeling Florence Welch, Wyatt Pike making Rihanna’s “Stay” his own, and street performer Murphy doing some creaky Croce all rocked, or at least soft-rocked.. It was surprising that the big guy with the pretty voice, pilot Graham DeFranco, made it through after he failed to rock his performance (Lionel said Graham lacked “entertainment”), or that quirky-girl Lizzy O’Very’s oh-very shrieky and shticky accordion cover of Ellie Goulding’s “Lights” was taken seriously at all. But hey, at least Lizzy entertained.

Finally, in the Soul and R&B categories, military band singer Re’h, whose disco-diva Donna Summer audition had almost made her seem like a joke contestant a couple weeks ago, showcased her more serious side with “Get Here” — though I still doubt she has what it takes to get to the top 20. However, Xavier Washington’s sublimely soaring “Gravity” had the judges and his fellow contestants testifying and jumping out of their Dolby Theater seats. And Grace Kintsler, whose “Natural Woman” audition has already racked up 13 million online views, is sure to rack up a few million more this week for her dynamite rendition of Jazmine Sullivan’s “10 Seconds.”

But the show saved the best for last, with Willie Spence and his “All of Me” tour de force. Willie had to put his career on hold after his mother suffered a stroke, but it seemed like this week, his time had finally arrived — as he got closer to making the top 20, or maybe even winning that Grammy he’s been dreaming about. “Your career is waiting right there for you,” Lionel assured him. “I feel like God has given me a second chance,” declared Willie. “I was born for this.”

On Monday, Season 19’s Duets Challenge will commence, and ahead of that episode, on Sunday the judges delivered some “game-changing news”: The contestants will be assigned duet partners, rather than choosing them on their own. So, good luck to whoever ends up having to hold their own against Xavier Washington, Grace Kintsler, or Willie Spence… or ends up having to duet with poor Claudia Conway and contend with an inevitable backlash-by-association.