Click happy! Janhvi Kapoor enjoys a shoot at the beach 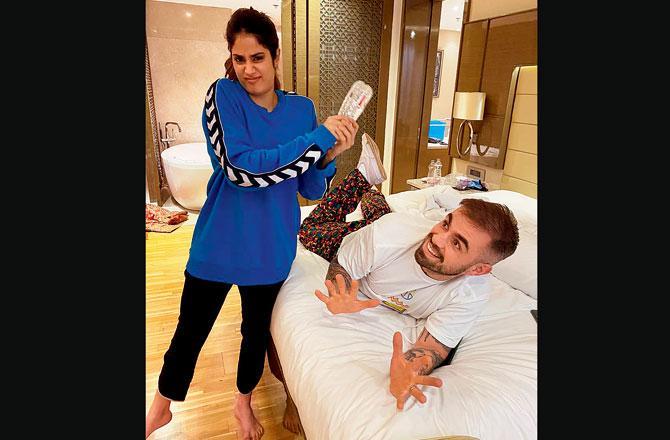 Janhvi Kapoor displayed her goofy side during a magazine photoshoot at a Juhu hotel. She played to the cameras with French makeup artist and hairstylist Florian Hurel. “We have a fabulous time working together. We laugh, crack jokes and, of course, gossip a bit,” says Hurel.

On the work front, Janhvi Kapoor was last seen in Lust Stories and Gunjan Saxena: The Kargil Girl. Now, the actress has Roohi Afzana and Dostana 2 as her next projects. Both the films were slated for 2020 release, but due to coronavirus outbreak, the projects have been delayed.

Roohi Afzana is concerned, the story is touted to revolve around a ghost who puts all the bridegrooms in a town to sleep with his singing so that it can possess their brides. Dinesh Vijan and Rajkummar team up again after the blockbuster success of Stree and before we witness a sequel to this film, they have come up with another intruding collaboration.

The actress has also landed a role in period drama Takht, which is a Karan Johar movie, Janhvi Kapoor has time and again faced the flack for bagging films and being a part of nepotism. In an interview earlier, the actress shared how such criticism affects her and the entire family. “I auditioned for films within Dharma also. I actually auditioned for a film in Dharma only that I didn’t end up getting.” She was then asked if it was Karan Johar who informed her about her rejection, she said, “No, the director will tell me and then Karan will also tell me, ‘For this reason…’, ‘You are looking too young’ or whatever.”

“Yeah, it hurt my father, but he had seen the film much before and his belief in my performance and the film was so strong that he was not so affected by the social media situation. That gave me a lot of strength as well,” concluded Janhvi.