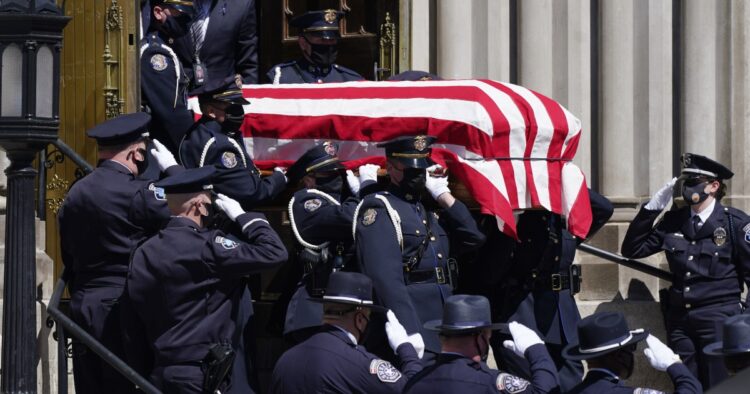 Mourners, some with tears in their eyes, lined the road waving flags.

Police, sheriff’s deputies, park rangers, firefighters, paramedics had come from every corner of Colorado to attend the public funeral of Officer Eric Talley.

Talley, 51, a Boulder policeman and father of seven, was killed March 22 while responding to the mass shooting inside a King Soopers grocery store.

Talley led the charge inside the store 30 seconds after he arrived on the scene and was shot in the head. Other officers eventually subdued the gunman, 21-year-old Ahmad Al Aliwi Alissa. In all, 10 people were killed.

At the service, Talley’s widow and children sat before his flag-draped casket. A bouquet of roses and purple irises sat behind it. A small banner lay across the flowers bearing the word `”Phenomenal.”

“Officer Talley believed in something so strongly that he was willing to die for it,” the Rev. Daniel Nolan told mourners. “I would argue that Officer Talley’s life was not taken, it was given.”

Nolan read a poem called “Unsung Hero” written by Talley’s children. One verse: “May the Angels watch over you, and guard you on your way, may God bless and protect you, and bring you home each day.”

The outpouring of emotion over Talley’s death comes at a time of increased scrutiny of police departments nationwide over their treatment of minorities and their handling of peaceful protests and riots last summer following the death of George Floyd in police custody. An officer accused in that killing, Derek Chauvin, went on trial Monday in Minneapolis.

By all accounts, Talley was an exceptional police officer and a devoted family man. One friend said he led a life of quiet heroism showcased by numerous small, but telling, acts of service.

For years he worked in internet technology but at age 41 felt compelled to become a police officer.

The had one trait he had in common with all high performing individuals was optimism, Boulder Police Chief Maris Herold told the crowd.

She said he told her how much he loved his job.

When there was a flood in Boulder, he shoveled water from homes. When he had to work on Father’s Day, he organized barbecues for others who could not be with their dads that day. When a boy with cancer put out a plea for police paraphernalia, Talley gathered badges and patches and delivered them to the child himself.

“His dedication was not limited to people,” Herold said. “In 2013, he pushed through a drainage ditch to rescue a mother duck and 11 ducklings. By all accounts, the mother duck was grateful.”

Looking at Talley’s children, who range in age from 7 to 20, Herold paused to gather herself.

Eric also liked to keep in touch, according to his supervisor Sgt. Adrian Drelles.

“I took Eric into my office one day and told him I was putting a limit on the number of times he could call me,” he told the crowd. “Only 10 per day.”

Drawing laughs, Drelles explained that Talley immediately called to say he was heading to the bathroom.

He recalled the drive to the Talley home to deliver the news of his death. When the children saw how distraught he was they turned the tables.

“His children gave me comfort. That is the lesson he taught them, to serve others,” Drelles said. “Be proud of your father, he was a hero.”

The funeral was interspersed with music — “Cat’s in the Cradle,” “Rhinestone Cowboy,” “The Last Goodbye” — with images of Talley with his family, friends and fellow officers projected on a screen.

Colorado Gov. Jared Polis, a Boulder resident, said the stories about Talley `”barely scratch the surface.” He said there has been an outpouring of sympathy from all over the world.

“It is a sign of a life well-lived when you are so beloved,” Polis said.

Then dozens of law enforcement officers, in crisp blue uniforms, walked past his casket — one on each side, slowly saluting each other as they passed.

Boulder police officers carefully lifted the flag from the casket and methodically folded it. The chief presented it to Talley’s widow. A bugler played Taps.

A dispatcher’s voice crackled over the speakers. She called out badge number 295 — Talley’s badge.

“Officer Eric Talley, you are released from end of watch,” the voice said. “Well done, good and faithful servant. We have the watch from here.”

A lone bagpiper played `”Amazing Grace” and everyone quietly filed out.

Kelly is a special correspondent.