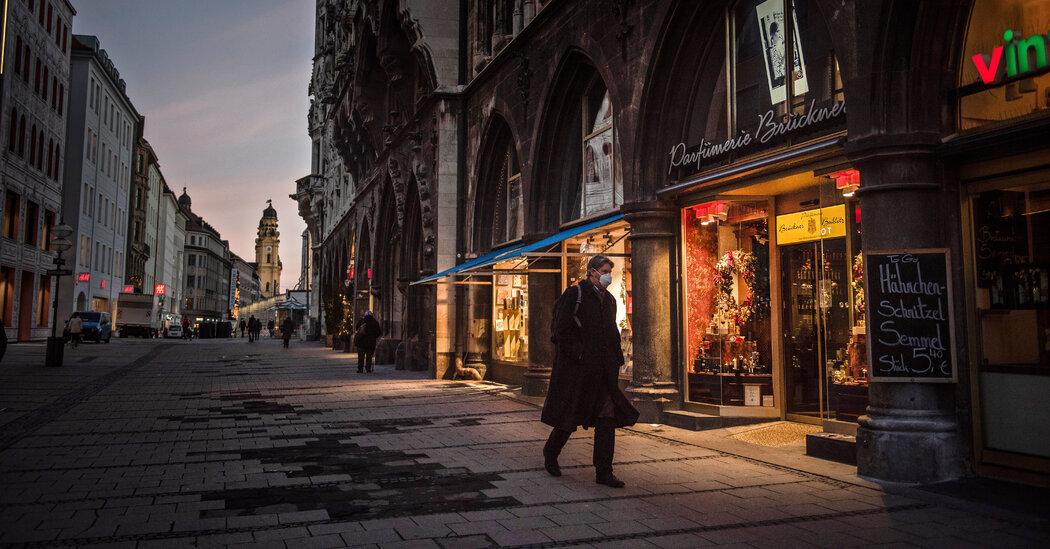 Good morning. The U.S. again stands virtually alone in the severity of its outbreak.

It’s happening again: For the second time this year, the United States has fallen behind nearly every other country in combating the virus.

The U.S. was not alone in suffering a resurgence this fall. Much of the world did. But many other countries responded to that surge with targeted new restrictions and, in a few cases, with an increase in rapid-result testing.

Those measures seem to be working. Worldwide, the number of new cases has fallen over the past week.

In some countries, the declines are large: more than 50 percent over the past month in Belgium, France, Italy, Kenya and Saudi Arabia; more than 40 percent in Argentina and Morocco; more than 30 percent in India and Norway.

And in the U.S.? The number of new cases has risen 51 percent over the past month.

The causes are not a mystery. The U.S. still lacks a coherent testing strategy, and large parts of the country continue to defy basic health advice. One example is Mitchell, a small South Dakota city, where deaths have spiked recently — including the loss of a beloved high school coach. Yet anti-mask protesters continue to undermine the local response.

Among their messages at a recent City Council meeting, as Annie Gowen of The Washington Post reported: “Positivity defeats the virus.”

Europe offers a telling contrast. Several European countries put new restrictions in place over the past month, and they made a difference, as you can see in the chart above. Still, the leaders of those countries remained unsatisfied with the progress — and announced further measures in recent days.

London closed pubs and restaurants today. The Netherlands has shut gyms, cinemas, schools and nonessential shops until Jan. 19. Germany — a country that loves its Christmas rituals — is locking down for Christmas.

Parts of the U.S. have taken some measures, like requiring masks and limiting indoor dining. And cases here have leveled off in recent days. If anything, though, that’s further evidence that people are not powerless in the face of the virus. Reducing its spread — and the widespread death that will otherwise occur in coming months — is entirely possible.

“America’s outbreaks, reaching from California to Florida, are the result of the public and the country’s leaders never taking the virus seriously enough and, to the extent they did, letting their guard down prematurely,” German Lopez of Vox recently wrote. As Jaime Slaughter-Acey, an epidemiologist at the University of Minnesota, said, “It’s a situation that didn’t have to be.”

For more: Full shutdowns are often not necessary, The Times’s Yaryna Serkez explains. Sharply reducing the number of people in indoor spaces can have a huge effect.

Unfrozen Lands: The climate crisis threatens much of the Earth with droughts, flooding and brutal heat. But it could also create unparalleled opportunity for a few countries — perhaps none more than Russia.

From Opinion: Columns by Jamelle Bouie and Farhad Manjoo.

Lives Lived: Over 21 years at the C.I.A., Dr. Jerrold Post pioneered political psychology. Later, as an academic, he analyzed world figures including Bill Clinton, Tony Blair and — in his last book — Trump. Post died at 86.

‘I wasn’t even mad … things happen’

Everybody makes mistakes. Not everybody makes a $3 million mistake. And very few people have volunteered to fix such a big mistake after making it.

That’s what Bill Duffy did. In 2003, he was a sports agent representing Anthony Carter, a journeyman N.B.A. player on the Miami Heat. Carter’s contract allowed him to opt into a $4.1 million contract for the next season, much more than he could have made as a free agent. Unfortunately, Duffy failed to submit the paperwork in time, and Carter lost more than $3 million as a result.

In response, Duffy promised to reimburse Carter for the lost money. As The Times’s Sopan Deb wrote, “It was an unusual and virtually unprecedented move.”

“I wasn’t even mad, to tell you the truth,” Carter, who’s now back with the Heat as an assistant coach, said. “I didn’t say, ‘What happened?’ Because I knew what type of person he was. Things happen.”

Duffy has just finished making the payments to Carter, and Sopan has told the full story — including how the mistake helped the Heat win a championship.

The pangram from yesterday’s Spelling Bee was pompadour. Today’s puzzle is above — or you can play online if you have a Games subscription.

Thanks for spending part of your morning with The Times. See you tomorrow. — David

P.S. The Times’s New York headquarters is still getting dressed up for the holidays, even if the newsroom is empty.