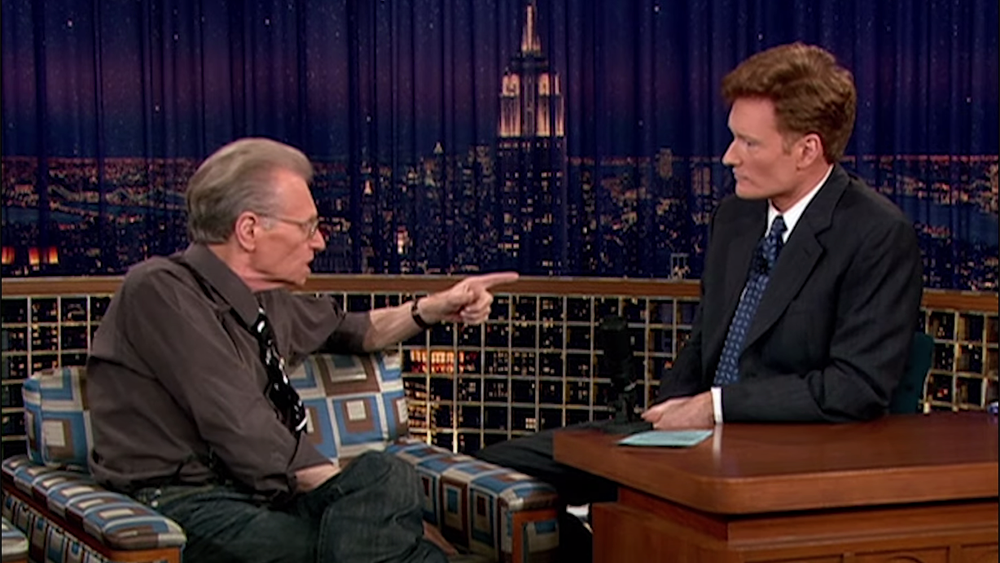 The entertainment industry mourned the loss of talk-show giant Larry King when he died on Saturday. Among the many stars voicing their grief was Conan O’Brien, who celebrated the late interview on Monday night.

“He loved to try jokes out and comedy out with us and that relationship started and that just kept going,” O’Brien said during the opening of his show. “For 27, 28 years Larry would come on our show and we’d have a weird idea and he’d just say, ‘I love it, I want to do it.’”

To commemorate King’s numerous appearances – many of which included humorous moments, costumes and stunts –Conan shared a nearly 10-minute montage of the famous interviewer goofing off with the late-night host and Andy Richter, who said “[King] was exactly what you wanted Larry King to be and a little bit more.”

The video features King donning a Wolverine-esque wig and claws, joking about how kissing Marlon Brando and even conducting a phone interview while suspended from the studio’s ceiling.

In the montage, King also snuggles up with O’Brien and Richter in bed, and he performs a standup set where he cracks jokes about his old age.

“You will be missed Larry, thank you so much for your friendship and for all the laughter,” O’Brien said.

King died just weeks after being hospitalized for Covid-19. He was 87.

Watch the full clip above.

Back to Top
Close Add post
X
Check Out our Best Patriotic Picks to Enjoy this Republic Day…TVMUMBAI: The occasion of Republic Day is upon us, and with it comes traditions like flag hoisting, parades and songs which commemorate our love for the…

Conan O’Brien Celebrates Larry King’s Humorous Side, Costumes And All

X
Queen Of The South: Teresa Mendoza’s Death Seems To Be Sealed In Season 5 …TVThe popular Queen of the South series is preparing for its season 5 on the Netflix platform, but it seems that it is showing a tragic end for Teresa M…
close