Congress and Trump punt the eviction crisis to Biden’s presidency 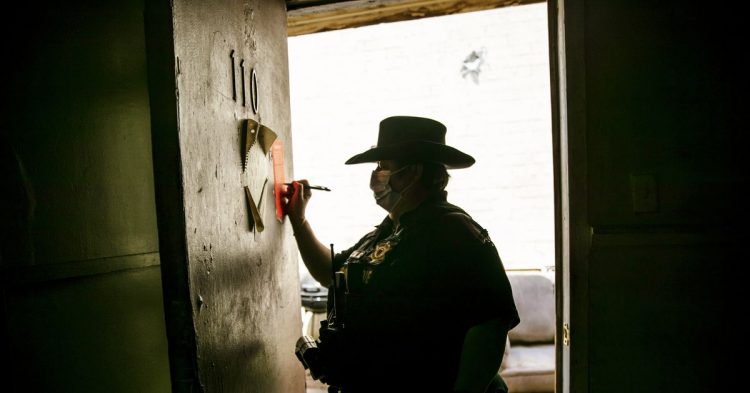 Renters at risk of eviction have narrowly avoided catastrophe — at least for another month.

The prohibition on kicking people out of their homes for not paying rent is an important safeguard — in August, the Aspen Institute warned that up to 40 million Americans were at risk of eviction this year if economic conditions remained unchanged. But it’s also one that kicks the can down the road. Eviction moratoriums are a Band-Aid solution that don’t address the root cause of not being able to pay rent.

It’s significant then that Congress included $25 billion in renters assistance, particularly in a year that so demonstrated the importance of home.

Staying housed became even more of a life-and-death issue in 2020, as Covid-19 took more than 300,000 lives and infected nearly 20 million people in the US alone. Research showed that evictions could have increased the pandemic’s death toll, as eviction comes hand-in-hand with crowding in with friends or family or ending up homeless, both of which make it nearly impossible to follow public health guidelines around social distancing.

That makes the $25 billion in rental assistance even more of a significant victory for landlords and renters alike. There is widespread expert and industry consensus that rental assistance is the only real solution to keeping people housed and stabilizing the market.

The $25 billion will be sent to states to disperse as they see fit. Depending on where you live you might have to apply for the assistance to the state or a local relief agency. Some states already have rental relief administration programs and others will need to design them quickly to meet demand. There are sure to be complications around making sure those in the most dire circumstances are first in line to receive the aid.

Importantly, the $25 billion in rental assistance isn’t the only money that could go toward ameliorating renters’ collective back rent. The stimulus package also includes $600 stimulus checks (which might become $2,000 checks) and extended unemployment insurance, both of which will help struggling families make rent. It’s a significant sum of money, but the uncertainty around negotiations has made it difficult for families to plan. Until the evening of December 27, when the President finally signed the relief package, millions of renters nationwide believed they could be evicted in just over three days.

Still, there’s a lot more that needs to be done if America is going to prevent financial catastrophe for the bottom end of the rental market. Stout, a global advisory consulting firm, estimated that at least $25.1 billion would be owed come January. That might now be covered — but Moody’s Analytics’ chief economist Mark Zandi put the figure even higher, estimating that up to $70 billion could be owed by year’s end.

The tens of millions of renters who could owe tens of thousands of dollars each and face eviction are, of course, the highest-risk group if direct financial assistance can’t cover their needs. However, there will also undoubtedly be second-order effects on landlords and the affordable housing market writ large that could have serious consequences.

Research from the Urban Institute shows that the average rent in small rental properties is less than “the median for single-family rentals, medium-size apartment buildings, and large apartment buildings.” And in 2018, “the median income for a two-to-four-unit landlord was $67,000.” Renters of these units are predominantly Black and Hispanic, and they have the lowest median household income when compared to renters of other types of properties.

This means that renters of small properties tend to be poorer and tend to work in industries that were most harmed by Covid-19: food service, retail, and construction, to name a few. On top of that, the landlords they rent from are some of the least capable of absorbing the loss of income from unpaid rent. Many of these landlords have mortgages of their own, and all of them are required to maintain their properties — which means operating costs continue even as rent payments decline.

If these affordable housing units are lost because landlords are unable to keep up with the costs of maintaining these properties, it’s likely to raise rents as supply dwindles or large private equity firms or investors flip these properties to service a higher-income population. It’s a dynamic that played out following the 2008 financial crisis — and it could happen again if we’re not careful.

President-elect Joe Biden, who hasn’t announced his position on a national ban on evictions, will have the opportunity to extend the eviction moratorium without Congressional approval when he is sworn in on January 20. Looking to Biden’s Housing and Urban Development agency review team, it seems his advisers are sympathetic to a national ban on evictions during this crisis. Biden’s team includes Peggy Bailey, a housing policy leader at the Center on Budget and Public Priorities, who co-authored a recent report in favor of a federal eviction ban; and Solomon Greene of the Urban Institute, who has spoken positively about the CDC’s evictions moratorium.

But once widespread vaccination is a reality and the public health cost of evictions decreases, tens of millions of renters could lose eviction protections and still owe thousands to landlords. It’s a stark example of the K-shaped recovery that has spurred on a booming housing market as the bottom end of the rental market sees the floor fall from beneath it.