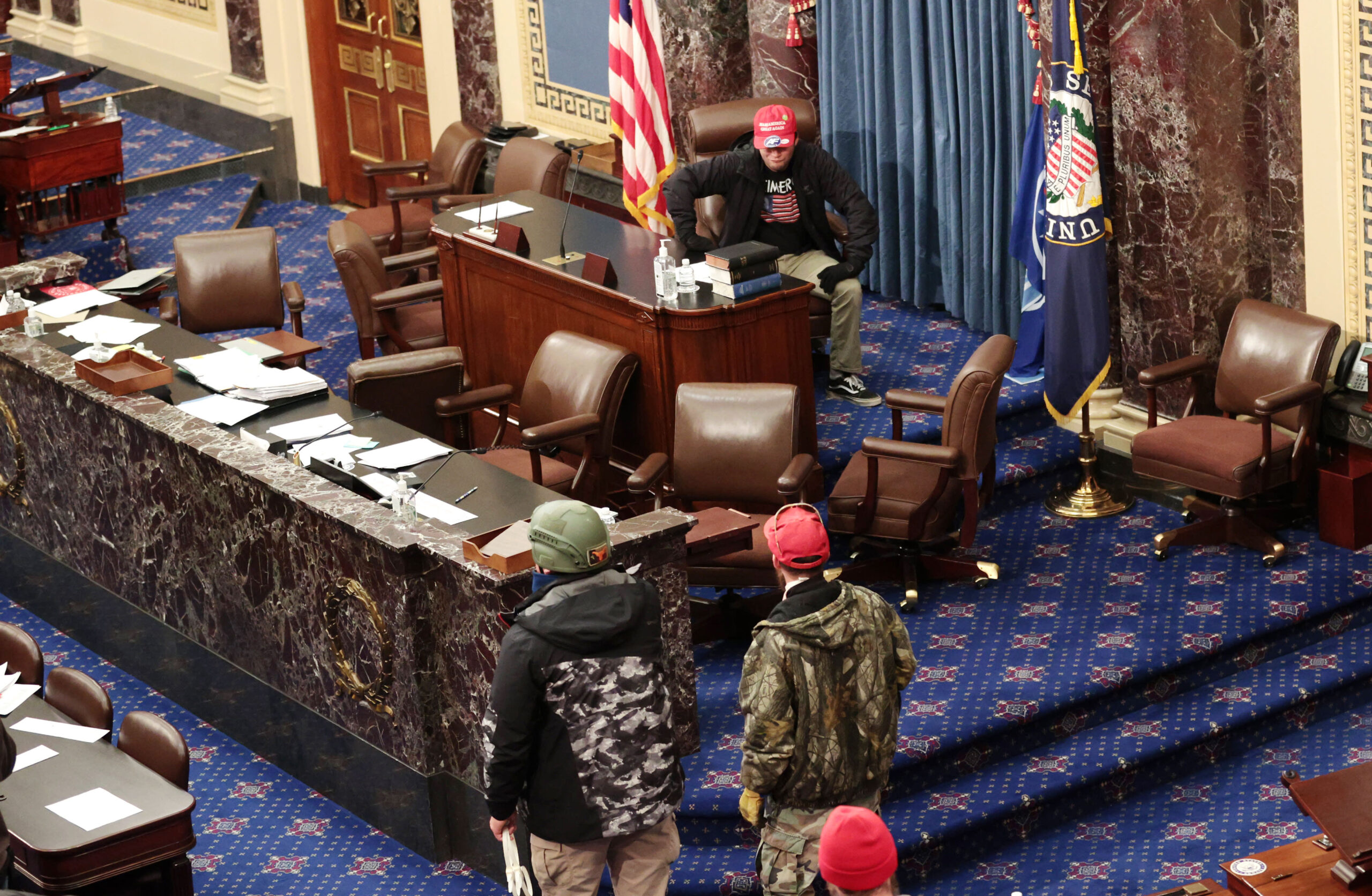 Protestors freely roamed through the Capitol complex, including the Senate chamber, where one man stood on the president of the Senate’s chair and shouted, “Trump won that election!”

Vice President Mike Pence, who had been presiding over the count of Electoral College votes, was ushered out of the Senate as the U.S. Capitol Complex went into lockdown when Trump supporters began breaching the complex.

Pence and Sen. Charles Grassley, the president pro-tempore, were taken to a secure location.

A spokesperson for House Speaker Nancy Pelosi says she is “safe,” but would not elaborate on her whereabouts.

Members of Congress were ordered to take shelter in the complex.

At the same time, shocking images of a protestor dangling from the walls of the Senate chamber, a woman drenched in blood on a stretcher, Capitol police point guns on the floor of the House of Representatives, and other chaotic scenes played on television screens and Twitter feeds around the nation.

Trump’s spokeswoman Kayleigh McEnany said the “the National Guard is on the way along with other federal protective services.”

“We reiterate President Trump’s call against violence and to remain peaceful,” McEnany said.

Biden, in a nationally television address, said, “At this hour, our democracy is under unprecedented assault.”

“It’s chaos, it borders on sedition and it must end now. I call this mob to pull back and allow this work of democracy to go forward,” Biden said as the occupation of the federal legislative branch of government continued.

“Therefore I call on President Trump to go on national television now to fulfill his oath and defend the constitution, and demand an end to this siege,” the president-elect said.

Pelosi and Senate Minority Leader Chuck Schumer, D-N.Y., in a joint statement said, “We are calling on President Trump to demand that all protestors leave the U.S. Capitol and Capitol Grounds immediately.”

Trump, during a rally earlier outside the White House, had encouraged thousands of his supporters to march to the Capitol to protest the proceedings there.

The president later was angered to learn that Pence had issued a statement saying he would refuse to go along with Trump’s demand that he try to block the confirmation of Biden’s Electoral College victory.

“This is a coup attempt,” tweeted Rep. Adam Kinzinger, an Illinois Republican.

Sen. Mitt Romney, the Republican from Utah, directly blamed Trump for the riot.

“This is what the president has cause today, this insurrection,” said Romney, who was the GOP’s 2012 presidential nominee.

Bowser’s office has also requested the presence of the U.S. National Guard.

Jonathan Hoffman, Chief Pentagon Spokesman, in an emailed statement, said, “The D.C. Guard has been mobilized to provide support to federal law enforcement in the District.”

“Acting Secretary Miller has been in contact with Congressional leadership, and Secretary McCarthy has been working with the D.C. government,” Hoffmann wrote. “The law enforcement response will be led by the Department of Justice.”

Virginia Gov. Ralph Northam said he was sending members of his state’s National Guard and 200 state police troopers to respond to the city of Washington’s request for assistance.

A spokesperson for the Washington D.C. Fire and Emergency Medical Services Department said they have had several people treated for injuries.

Lawmakers had just begun the procedural process of counting the Electoral College votes and formally declaring Biden the winner when the chaos erupted.

Members of congress run for cover as protesters try to enter the House Chamber during a joint session of Congress on January 06, 2021 in Washington, DC.

Trump, despite have told the crowd he would join them in the march to the Capitol, actually returned to the White House.

Trump slammed his Vice President Mike Pence on Twitter before calling on supporters to “Stay peaceful!”

Supporters of US President Donald Trump enter the US Capitol on January 6, 2021, in Washington, DC.

Pence, in a tweet, said, “The violence and destruction taking place at the US Capitol Must Stop and it Must Stop Now. Anyone involved must respect Law Enforcement officers and immediately leave the building.”

“Peaceful protest is the right of every American but this attack on our Capitol will not be tolerated and those involved will be prosecuted to the fullest extent of the law,” Pence wrote.

McCarthy said he spoke to Trump and asked for his help to quell the protests.

Rep. Peter Welch, the Democrat who is Vermont’s at-large congressman, said in a tweet that “gas masks are being prepared.”

A protester dangled from the balcony in the Senate Chamber on January 6, 2021, in Washington.

Sen. Ted Cruz, one of the Republicans leading the effort to challenge Biden’s victory through a series of objections to the results of individual state elections, said, “Violence is always unacceptable. Even when passions run high.”

“Anyone engaged in violence — especially against law enforcement — should be fully prosecuted,” Cruz tweeted. “God bless the Capitol Police and the honorable men & women of law enforcement who show great courage keeping all of us safe.”

Bill Barr, who last month resigned as U.S. attorney general after disputing Trump’s claims of widespread ballot fraud, said, “The violence at the Capitol Building is outrageous and despicable.”

“Federal agencies should move immediately to disperse it,” Barr said.