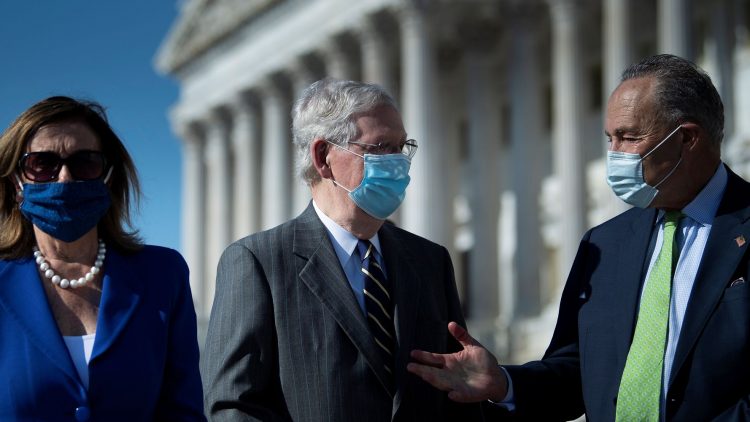 Top lawmakers finally reached a deal for more than $900 billion in COVID-19 relief, including another round of stimulus checks for most Americans and an additional $300 per week for people receiving unemployment benefits.

If all goes according to plan, the deal would end a half-year stalemate between congressional leaders and President Donald Trump’s administration over how to deliver financial relief to Americans on top of a $1.4 trillion omnibus spending bill that will serve as the vehicle for the coronavirus package.

It took nearly five months for Congress to renew additional unemployment benefits after an extra $600 a week expired at the end of July. And the logjam broke only after a bipartisan group of moderate senators agreed on a stimulus package of their own in early December.

The deal came together after negotiators stumbled Friday over Republicans insistence that the Federal Reserve be disallowed from creating any lending programs “similar” to ones created under the CARES Act. They ultimately compromised on language that would disallow exact replacements of those programs, which had been backed with a whopping $454 billion but barely used.

The $600-per-person check, according to two sources familiar with the talks, is roughly half the size of what was sent out over the summer, but will still be welcome news to most Americans.

Trump tweeted in the middle of the night over the weekend that he thought Congress should increase the amount of the checks — something his own personal aides have reportedly been advising him against. Trump reportedly wanted direct payments of up to $2,000 per person but is OK with the final number. The final deal would phase out the checks for those making above $75,000.

Democrats made concessions over unemployment benefits to secure the checks. While the original gang of moderate senators proposed reauthorizing federal programs for gig workers and the long-term jobless for four months, the new agreement would continue federal programs for unemployed Americans for just 11 weeks, a source familiar with the talks said, to offset the cost of another round of direct payments.

The final deal would give $300 per week in federal unemployment insurance to laid-off workers on top of their state benefits for 11 weeks — half of the $600 benefit Congress passed last spring but still larger than any boost the program has seen in previous years.

Democrats also won an extra 11 weeks of compensation for people who have been unemployed for so long they’ve run out of both state and federal benefits, as well as language easing repayment requirements for workers who were accidentally overpaid by a state workforce agency.

But Republicans won a gradual phase-down of federal programs. Workers won’t be able to start a new federal claim after March 14, but will be allowed to continue receiving benefits until April 5 if they started a claim before then. A gradual end to federal benefits would mean there would be less of a “cliff,” where millions of people get cut off at once, pressuring Congress to act.

Another key to the final bill was what wasn’t in it; namely, a liability shield for businesses or aid to state and local governments.

The liability shield was one of the more poisonous proposals. McConnell had sought to ban personal injury lawsuits related to coronavirus exposure for years to come. Ultimately, McConnell agreed to drop his insistence on the liability provisions if Democrats dropped $160 billion in additional state and local aid — badly needed funds to help those governments make up for budget shortfalls caused by the pandemic-related recession.

That decision allowed Democrats and Republicans to move forward with the bill, but it also may set up Democrats to secure another economic stimulus package once President-elect Joe Biden is sworn into office. With state governments facing layoffs, governors may go to their congressional delegations and push for funds, which could create bipartisan support for aid in yet another relief measure.

And for some Democrats in Congress, the package doesn’t do enough.

For one, it lacks that state and local funding now. For another, the stimulus checks are far less than what Democrats were seeking. And the additional unemployment benefits are half of what out-of-work job seekers were getting from April to August.

A number of members in the Congressional Progressive Caucus were very critical of negotiations last week. Rep. Rashida Tlaib (D-Mich.) said she still wanted the bill to do more — perhaps $1,200 stimulus checks, or even $2,000 checks, as progressives have argued for — and she said she would vote with the CPC.

Last week Rep. Ro Khanna (D-Calif.) said the same thing, adding that people needed more than $600 checks and that the time period for the additional $300 in unemployment benefits had been shrunk by a month in final negotiations. (The bipartisan deal would have provided an additional 16 weeks of benefits, but the legislation that Pelosi and McConnell agreed to would only do 12 weeks.)

Khanna, who pushed for Pelosi to take the $1.8 trillion deal the White House offered just before the election, once again noted that this legislation was worse than the previous offer, and he refuted the argument that Pelosi never had a true offer because McConnell was still insisting on his liability shield.

If McConnell refused to give up on the liability protections, even after Pelosi and Treasury Secretary Steve Mnuchin had reached an agreement, Khanna said, ”it would have clearly identified McConnell as the block… and then it would have depended on how much pressure Trump was willing to put on him.”

Even Sen. Bernie Sanders (I-Vt.), who partnered with conservative Sen. Josh Hawley (R-Mo.) to lobby for the inclusion of stimulus checks in the final deal, said the compromise was insufficient.

Some other Democrats were upset about the deal’s “arbitrary expirations” for certain programs that help struggling Americans.

Sen. Ron Wyden (D-Ore.), the top Democrat on the Senate Finance Committee, said McConnell is “already setting the table for economic sabotage by insisting on a short phase-out of unemployment benefits that removes the hard deadlines that pressure Congress to act.”

Democrats did secure $25 billion to establish a new program to provide emergency rental assistance that Americans can use to pay past-due rent and other housing expenses. And Democrats got money to help schools, money for vaccine distribution and funds for struggling sectors of the economy, including transportation and the U.S. Postal Service.

Republicans are also getting more than $300 billion to help small businesses, with $257 billion going to the Paycheck Protection Program, which loans money to businesses to prevent greater job losses.

Still, the deal is likely to be too much for some Republicans. Some conservatives were already telling HuffPost — before the deal was finalized — that they’d very likely vote no.

“My strong inclination is I’m going to be a no,” Rep. Jim Jordan (R-Ohio) said Wednesday night.

The bill could still easily pass both chambers even with opposition from the far-left and far-right of both parties — as long as leaders can actually finish the deal.

Lawmakers passed an emergency short term funding bill Friday to carry them over the weekend and avert a shut down in order to continue negotiations and are set to pass another short term spending bill Sunday night in order to vote on the final package Monday. The goal has been to pass some kind of relief package before the end of the year.  federal programs for unemployed Americans expire at the end of the month, risking stranding 12 million job seekers.