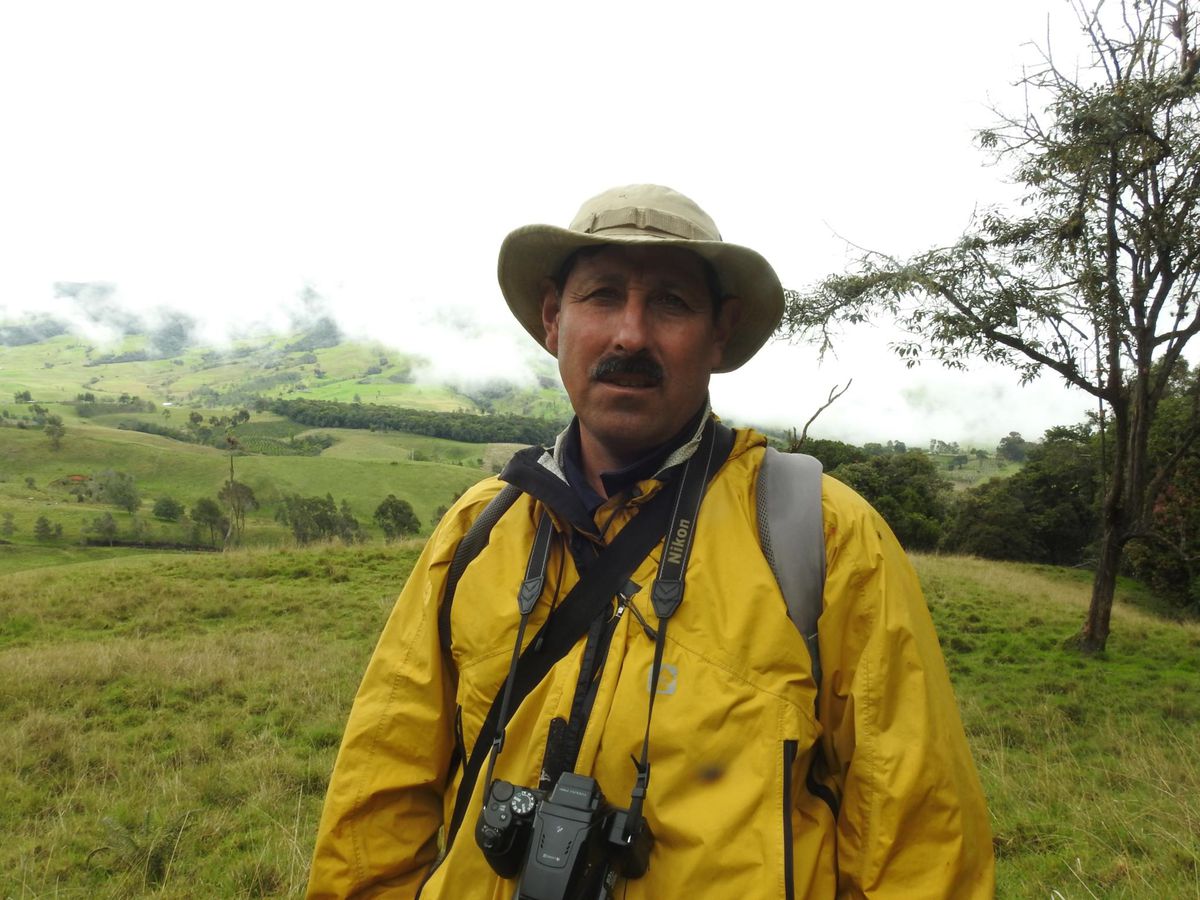 Mr Molina, known as ‘Gonza’ to his colleagues, friends and admirers, worked with Fundación ProAves as the coordinator of the Reserva Loros Andinos, where he devoted more than 20 years of his life to conserving the yellow-eared parrot. The yellow-eared parrot, Ognorhynchus icterotis, is an endemic species found only in the cloud forests of the Central Andes. This parrot was thought to be extinct until it was found in Colombia in 1999.

Mr Molina was reported missing on 8 January 2021, soon after he had completed a national census of the yellow-eared parrot and of the Critically Endangered Fuertes’ indigo-winged parrot in December 2020, according to Fundación ProAves. His notebooks from that recent survey, conducted in the municipality of Roncesvalles, documented that he had counted 2,895 yellow-eared parrots. This is the greatest number of these parrots seen in many decades.

“There would be no Yellow-eared Parrots without him”, Sara Ines Lara, Executive Director of Fundación ProAves, said in a statement.

Thanks to Mr Molina’s dedicated conservation efforts, which were wildly successful, the yellow-eared parrot is currently rebounding quickly from the brink of extinction.

“We have worked shoulder-to-shoulder with him for 22 years and I am so grateful for the time he dedicated to ProAves”, Ms Lara said.

Mr Molina, who was born and raised on a farm in Roncesvalles in Tolima, Colombia, was Fundación ProAves’ first employee. He began his work as its first forest guard. During the decades that he devoted to safeguarding the parrots and their habitat, Mr Molina and his team regularly faced life-threatening situations from frequent battles between the military and guerrillas. Nevertheless, he remained undeterred.

“Gonzalo always instilled in us his unconditional love for nature, and taught us that one has to love the environment.”

The yellow-eared parrot also lived in the cloud forests of Ecuador, but hasn’t been spotted in that country for many decades, after the last of them were trapped illegally and died in captivity. The parrot almost disappeared due to habitat loss after more than 90% of the Andean cloud forest was cleared for farming and human settlement.

In fact, the yellow-eared parrot was thought to be extinct until a team of researchers sponsored by the American Bird Conservancy and Fundación Loro Parque followed up on rumors that this species still lived. After one year of searching, they counted a total of 81 individuals in the cloud forests of the central Andes, in Roncesvalles, in April 1999.

Listed as Critically Endangered when it was first observed, the yellow-eared parrot’s recovery has been so spectacular that it was downlisted to Endangered by the International Union for the Conservation of Nature (IUCN) in 2010, when its numbers surpassed 1,000 individuals. In the two decades since it was first found, the yellow-eared parrot’s numbers increased from less than 100 to more than 2,600, making this conservation effort one of the most successful in all of South America.

Yellow-eared parrots nest in wax palms, typically in a natural cavity that is 80-100 feet (24-30 meters) off the ground. Fortunately, these parrots readily accept artificial nest boxes, a conservation strategy adopted by ProAves that has greatly helped these parrots recover.

Although they eat a variety of buds, seeds and fruits from palms, trees and ferns, these parrots are heavily dependent on the fruits of wax palms. Because of the yellow-eared parrot’s strong dependence on wax palms, Mr Molina also became an expert on the regeneration of the Quindío wax palm, Ceroxylon quindiuense.

The Quindío wax palm, which does not reach reproductive age until it is at least 80 years old, is also endangered. Its population was reduced to a few small and fragmented pockets due to habitat destruction, harvest for its fruits, which are fed to cattle and pigs, destruction of its seedlings by grazing cattle, and for its leaves, which were collected from young plants until they died, to be indiscriminately used in religious observations of Palm Sunday (PDF).

Since the palm was designated the national tree of Colombia in 1985, it was declared a legally protected species, and is slowly recovering, mostly due to massive replanting efforts and the creation of a silvopasture plan that protects both palms and wildlife whilst also benefiting the people in the area.

Other conservation efforts focus mainly on yellow-eared parrots, including local education efforts, including media campaigns, festivals, ecological workshops, and even a brightly painted “parrot bus” — a mobile classroom that visits hundreds of schools around the country, spreading the message of parrot conservation to more than 150,000 children.

These conservation efforts also helped inspire the establishment of a Threatened Parrot Corridor that spans both slopes of the Central Andes in 2009. This Corridor was the result of collaborative efforts by ProAves Colombia, Fundación Loro Parque, the American Bird Conservancy, and the Rainforest Trust. The Corridor encompasses more than 18,000 acres of key habitat for the yellow-eared parrot as well as four other endangered parrot species and other endangered wildlife, especially the mountain wooly tapir and the spectacled bear. It also protects four major watersheds that provide fresh water to thousands of people.

Seeing what Mr Molina helped inspire makes his death even more tragic. However, Mr Molina did not die in vain: he lives in every yellow-eared parrot that flies joyfully through the skies, he can be found in every wax palm that was planted in his name, and he lives in everyone whose life has been touched by his actions.