Home General Coronavirus | A Christmas celebrated under the pandemic’s shadow

Coronavirus | A Christmas celebrated under the pandemic’s shadow 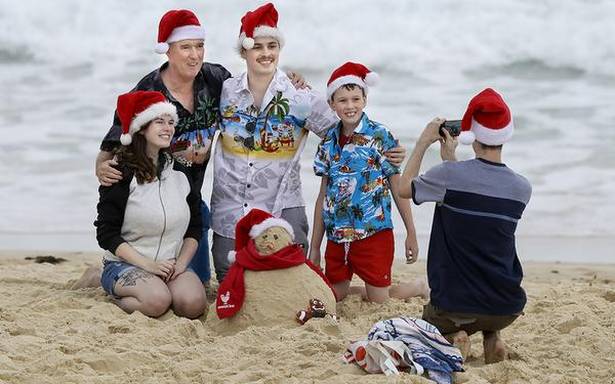 Hundreds of millions across the world celebrated pared-down Christmas festivities on Friday due to coronavirus restrictions, as Pope Francis appealed for people to show “fraternity” faced with crises aggravated by the pandemic.

“At this moment in history, marked by the ecological crisis and grave economic and social imbalances only worsened by the coronavirus pandemic, it is all the more important for us to acknowledge one another as brothers and sisters,” Pope Francis said in his traditional “Urbi et Orbi” message.

The pontiff, who just celebrated his 84th birthday, gave his eighth Christmas message “to the city and the world” by video from the apostolic palace, to prevent a crowd from gathering in St Peter’s Square.

The battle to halt the pandemic, which has claimed more than 1.7 million lives, is far from over despite the launching of mass vaccine campaigns.

Europe, where a new strain of coronavirus believed to spread much faster has emerged in Britain, on Friday passed 25 million confirmed cases.

Last week it became the first global region where more than 5,00,000 people have died of the virus.

In Asia, South Korea reported its highest daily number of coronavirus cases on Friday, as the country’s Christmas celebrations were marred by a harsh third wave of COVID-19.

The nation has been held up as a model of how to combat the virus, with the public largely following official guidelines, but Friday saw a record 1,241 new infections.

“It really is heartbreaking to see,” said Park Jae-woo, a member of the Yoido Full Gospel Church in Seoul which would usually expect up to 10,000 worshippers, but on Friday was only able to welcome 15 staff and choir members.

And in Catholic-majority Philippines, services were rocked when a 6.3-magnitude earthquake struck the country, capping off a troubled yuletide already muted by bans on parties and carol singing.

Tough new coronavirus restrictions were imposed on Thursday over the Christmas and New Year period across Italy, the hardes-hit European country, with nearly 71,000 deaths and more than two million cases.

Bethlehem, where Christians believe Jesus was born, prepared for a Christmas unlike any in its recent history.

Christmas Eve mass at the Church of the Nativity is traditionally the highlight of a holiday season that sees hundreds of thousands of visitors flock to the Palestinian city in the occupied West Bank.

The service was held online this year, with only clergy and select individuals allowed inside the basilica, which was sterilised ahead of the service.

In war-ravaged northeast Syria, hundreds of residents of a predominantly Christian neighbourhood in the town of Qamishli ditched face masks and donned Santa hats, throwing caution to the wind to celebrate a Christmas tree lighting ceremony.

Germany has been forced to cancel its famous Christmas markets, while in Kuwait, churches were closed until January 10 despite being home to a large Christian community.

Britons, meanwhile, were cut off from swathes of the world due to the emergence of a new COVID-19 strain.

Some U.K. border restrictions have been temporarily relaxed for the holidays.