Coronavirus | How China is controlling COVID-19 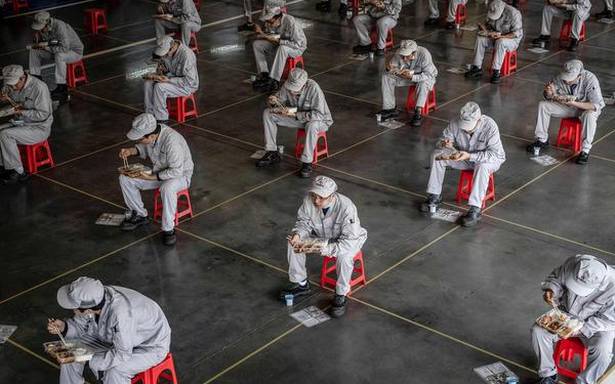 That China has broadly returned to normalcy, with people coming back to work in June and July, students returning to schools and colleges in August, and a surge in domestic tourism during the October national holiday that almost matched pre-pandemic levels, has been greeted abroad with a mixture of scepticism and incredulity.

How did a country of 1.4 billion people, where the COVID-19 pandemic first began in the city of Wuhan in December, manage to suppress local outbreaks and return to some form of normalcy by the summer, barring a few small clusters that have been quickly extinguished?

In August, images of a crowded waterpark of revellers in Wuhan and of crowds thronging a beer festival in Qingdao went viral — striking images of a return to normalcy that did not, however, put paid to persisting conspiracy theories online, convinced that China is either suppressing news about domestic outbreaks or has been quietly administering some secret cure unbeknownst to the rest of the world.

The explanation behind China’s recovery is, however, slightly more mundane.

That the outbreak began in Wuhan — and spread rapidly in December and January even as local officials covered up the scale of the outbreak until late January — is one unsurprising reason for the scepticism surrounding China’s COVID-19 recovery, as is the rather improbable official national COVID-19 data, according to which the country has only recorded around 86,000 cases and 4,600 deaths.

Leaving aside China’s famously unreliable official statistics — which almost certainly undercount the total number because many hundreds of cases and deaths were most likely not recorded during the early outbreak in Wuhan, a time when local authorities were covering up cases and hospitals were overwhelmed by a new virus and without the means to test every case — there is no evidence to suggest there are currently thousands of cases or hidden outbreaks.

This is backed up by, among other things, the return to normalcy, opening of schools, the boom in domestic travel, the current situation in hospitals, and not to mention, independent accounts from foreign reporters based in China.

How China managed to prevent the outbreak in Wuhan and Hubei province from spreading across the country in the early part of the year was one key factor in its COVID-19 battle.

A stringent lockdown of the entire province of Hubei — which lasted from January 23 to April 16 and was initially doubted as an effective strategy by public health experts — coupled with an equally stringent national lockdown throughout February that lasted, in some provinces, until March — was one key measure that bought the authorities time.

Cases in all of China outside Hubei would peak by late February because of tight restrictions that stopped all domestic travel and travel into China, essentially bringing all movement, and spread of the infection, to a grinding halt.

Crucially, it wasn’t only about locking down. In parallel with the lockdown period was the implementation of the world’s most expansive test and trace system that allowed authorities to stay ahead of the curve, with a suffocating approach that eventually helped bring cases through local transmission down to zero in most of China by the summer.

China by no means is COVID-19- free, but has been able to ensure low numbers since the summer by sustaining a suffocating “zero infection” approach to small clusters that have been reported since, brought either through imported cases from overseas or, as in the case of Beijing in June, through contaminated imported seafood.

This approach, combining mass testing and contact tracing, was applied in Beijing in June, in Dalian the following month, in Qingdao in October, and more recently, in Tianjin in November.

In Qingdao, the entire city was tested — 10.92 million in five days — after infections were reported at a local hospital, blamed on improper disinfection linked to an imported case. The city’s daily testing capacity was around 2,000 in February. It has been ramped up to 2.6 lakh as of today. One common approach was pooled testing, that uses 10 samples for a single test. Chinese public health experts also hail the unheralded role of contact tracing — in part enabled by technology and mandatory health apps, but also made possible by the largely forgotten but equally crucial legwork of tens of thousands of healthcare workers and volunteers — in allowing China to stay ahead of the COVID-19 curve.

China has also been stringent on international travel, not only continuing to limit the number of flights, but among few countries mandating 14 days quarantine for every international traveller at government-designated hotels. China has also been very selective in organising repatriation flights and discouraged those overseas from returning, an approach that has been criticised by Chinese citizens and students stranded abroad, including many in India.

Enforcing near-universal mask use has been another important measure, made possible not just in China but in much of East Asia by raised public awareness, helped by memories from the first SARS epidemic in 2002. Mandatory and universal mask use, Chinese experts say, has been crucial in containing the spread. Indeed, China’s latest cluster in Tianjin was found to have been caused by a man not wearing a mask, who spread the virus to eight people.

Some of China’s stringent “zero infection”— targeted strategies, such as enforced centralised quarantine even for asymptomatic cases, restrictions on international travellers, and the mass testing of entire cities, may be unpalatable measures that democratic governments may find difficult to enforce. They have, however, been broadly backed by the public in China, so much so that when a recent cluster emerged in Tianjin, there were calls online from elsewhere demanding Tianjin residents be barred from travelling. At the same time, other simple but effective measures such as getting people to mask up properly and spreading the right message on mask use right from early February, were critical and invaluable, even if those messages have yet to filter through in much of the rest of the world.