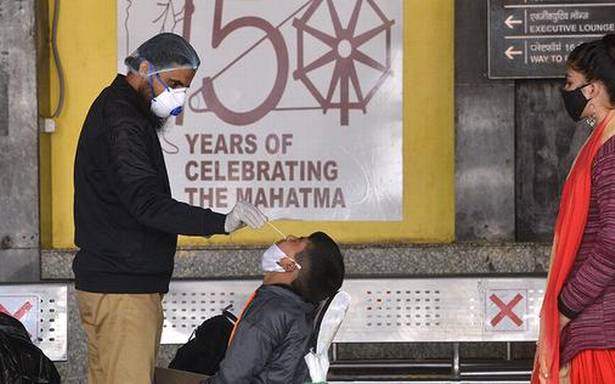 The Serum Institute of India (SII), the world’s largest manufacturer of vaccines by volume, will first focus on supplying AstraZeneca Plc’s COVID-19 vaccine to Indians before distributing it to other countries, Chief Executive Adar Poonawalla said on Monday.

“It’s very important we take care of our country first, then go on to COVAX after that and then other bilateral deals with countries. So I’ve kept it in that priority,” said Mr. Poonawalla, referencing the global COVAX facility, which has been set up to provide COVID-19 vaccines to poorer countries.

Here are the updates:

Following directions from the Centre, Karnataka has initiated necessary action for COVID-19 vaccine delivery, distribution and administration. The State’s COVID-19 Task Force has also deliberated on the issue and and preparations are being made for vaccine storage and delivery, Health and Medical Education Minister K Sudhakar said on Tuesday.

Speaking on the measures initiated for vaccine delivery and distribution, the Minister said the government has identified 29,451 session sites (vaccination sites) and 10,008 vaccinators as per the norms of the Universal Immunisation Programme.

Health Care Workers data has already been compiled for all the government facilities. 80% of the private health facilities have also shared their data. Compilation of data for the remaining 20% private facilities is likely to be completed in a week’s time, the Minister said in a statement.

Prime Minister Narendra Modi on Tuesday interacted via video conferencing with chief ministers of states that are witnessing a surge in coronavirus cases to review the COVID-19 situation.

The prime minister, till now, has held several virtual meetings with states over the coronavirus situation.

While the national daily COVID-19 case count has remained below 50,000 for some time, several urban centres have witnessed a surge, resulting in enforcement of several measures, including curfews in some cities.

Arvind Kejriwal informed the Prime Minister that Delhi saw 8,600 cases on November 10, in the peak of its third wave. “Since then, cases and positivity rate are steadily decreasing; the Delhi government hopes this trend continues,” the Chief Minister said.

He attributed the severity of the third wave to factors including pollution. Mr. Kejriwal sought Narendra Modi’s intervention to get rid of parali pollution (pollution from stubble burning) from adjoining States, especially in view of the recent success of the bio-decomposer solution.

All air and rail passengers to Maharashtra from Delhi, Rajasthan, Gujarat and Goa will have to carry RT-PCR negative test result with them, the State government announced on Monday. Those coming by road will be tested at border districts before entering the State.

The directive comes a day after Chief Minister Uddhav Thackeray’s warned of a ‘tsunami’ like second wave of coronavirus (COVID-19) cases and appealed to people to follow all safety norms.

“All domestic passengers travelling from airports in the NCR of Delhi, States of Rajasthan, Gujarat and Goa shall carry RT-PCR negative test report with them before boarding and show it to the teams at arrival airport”, says the directive The RT-PCR sample collection should have been done within 72 hours of scheduled time of landing at the airports in Maharashtra.

Those travelling by trains originating or having halt/stop at stations in the NCR of Delhi, Rajasthan, Gujarat and Goa shall carry with them RT-PCR negative test report before they decide to enter Maharashtra. The sample collection should have been done within 96 hours before their scheduled arrival.

For those travelling by road from the above mentioned States, the Collectors of land border districts concerned shall make arrangements to ensure that they are tested for symptoms, including body temperature. Only those without symptoms will be allowed entry. Passengers with symptoms shall have the option of turning back and going to their home to recuperate.

The lack of clarity over quarantine leave for workers in the State continues despite a gazette notification by the Karnataka government on special leave recently.

Instead of providing stricter guidelines, the gazette rather makes an appeal to employers, and one of the suggestions is transferring leave from the account of another employee, who has surplus, if the COVID-19 patient does not have adequate leave in his account.

In the midst of the COVID-19 pandemic, which has resulted in many workers losing out on their pay as there was no official clarity to the employers, the State government on November 6 published a special gazette on quarantine leave following a direction from the High Court of Karnataka, which is hearing a writ petition on the issue currently.

The special gazette is an “appeal” to private and public sector employers.

Night curfew to continue in Ahmedabad

Gujarat continues to see spike in COVID-19 cases and mortality as the virus is surging in cities such as Ahmedabad and Surat where the government has clamped night curfews.

In Ahmedabad, night curfew will be in place till December 7 as per the notification brought out by the Police Commissioner Sanjay Srivastav. All shops and parlours, restaurants and eateries will be shut before 9 p.m.. Pharmacies and milk and dairy parlours have been exempted from the curfew.

Although physical classes have not been conducted in schools for seven out of 10 months in the 2020-21 academic year and will not resume in December either, Primary and Secondary Education Minister S. Suresh Kumar has ruled out the possibility of a zero academic year.

He said that even though students are unable to physically report to class, teaching and learning have been an ongoing process during the pandemic. “Teachers in government and private schools are using different platforms to interact with students and ensure that there is no halt on learning,” he said. The Minister pointed out that even though no examinations were held for the 2019-20 academic year for students up to class 9, they were promoted to the next grade.

A day after Chief Minister K. Chandrasekhar Rao discussed concerns of film industry on account of COVID-19 pandemic with its leaders, the State government on Monday issued an order permitting reopening of cinema halls, theatres and multiplexes with 50 per cent seating capacity with immediate effect.

However, the managements should ensure all persons, audience, staff and vendors use masks at all times, sanitizers are available at entry and exit points, physical distancing and crowd management is followed and sanitisation of entire premises, particularly common areas, is done after every screening. The order also said show timings be staggered to ensure intervals of different shows did not occur simultaneously.

Artist Ramesh M.R. with his paintings exhibited at the Kerala Lalithakala Akademi Art Gallery in Kozhikode.

The Kerala Lalithakala Akademi Art Gallery at Mananchira here has been a favourite hangout for artists and art lovers for decades. It was not just art that held them together. It offered a venue for discussions about literature, culture, and politics.

Needless to say, when the facility was closed down by the end of March owing to the pandemic outbreak and subsequent lockdown, the intellectual community suffered.

Hence, when it was reopened eight months down the line, news spread fast. Though not as active as before, the art street near the gallery is once again alive, and ‘Hadikka’, the first exhibition at the gallery post-lockdown, has turned out to be quite a crowd-puller.

The State government issued a G.O. on Monday revising the dates for reopening of schools under all managements to avoid a flare- up of COVID-19, like it happened in some parts of the country, including Delhi.

The modified dates according to the G.O. issued by Principal Secretary (School Education) B. Rajasekhar are: Class 8 November 23, Classes 6 and 7 December 14 and Classes 1 to 5 after Sankranti.

The lack of clarity over quarantine leave for workers in Karnataka continues despite a gazette notification by the Karnataka government on special leave recently.

Instead of providing stricter guidelines, the gazette rather makes an appeal to employers, and one of the suggestions is transferring leave from the account of another employee, who has surplus, if the COVID-19 patient does not have adequate leave in his account.

In the midst of the COVID-19 pandemic, which has resulted in many workers losing out on their pay as there was no official clarity to the employers, the State government on November 6 published a special gazette on quarantine leave following a direction from the High Court of Karnataka, which is hearing a writ petition on the issue currently.

The special gazette is an “appeal” to private and public sector employers.

HC rejects plea for another lockdown

The Delhi High Court on Monday declined to entertain a petition to immediately place the Capital under lockdown in view of the rising COVID-19 cases and air pollution levels, saying it was a policy decision.

A Bench of Chief Justice D.N. Patel and Justice Prateek Jalan remarked that the petition was filed without doing any homework.

The Bench asked the petitioner, Kaushal Kant Mishra, whether he had studied the reports on ineffectiveness of imposing a lockdown.