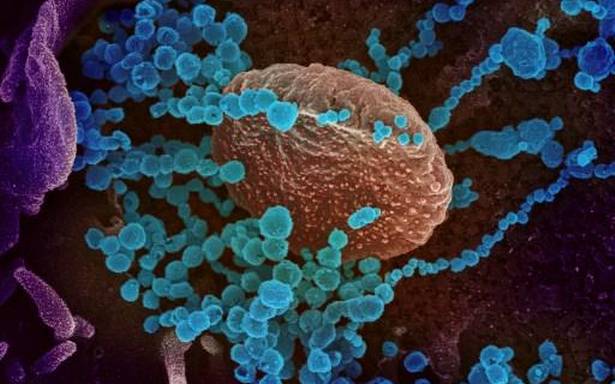 Kalyani-based scientists have found the biological mechanism behind the significantly faster spread of a variant with D614G mutation in Europe and North America but not in East Asia.

A team led by Dr. Nidhan K. Biswas and Dr. Partha Majumdar from the National Institute of Biomedical Genomics, Kalyani found that the variant with the D614G mutation introduced an additional cleavage site on the ACE-2 receptor for the SARS-CoV-2 virus to gain entry into cells.

However, the presence of an additional cleavage site alone does not automatically lead to better efficiency in entering the cells. For the virus to enter the cells more efficiently, the additional cleavage site has to be opened. “The site is opened by a human protein called the neutrophil elastase. This protein is available in plenty in the lungs,” says Dr. Majumdar. “When the level of neutrophil elastase is high in an individual, the additional entry point created by the mutation opens up in a larger number of cells thus allowing more cells to be infected. Thus, the variant with the D614G mutation is able to spread better from one infected individual to another.”

However, some naturally-occurring mutations in the AAT-producing gene result in deficiency of the AAT protein, explains Dr. Majumdar. The AAT protein deficiency thus results in a higher level of neutrophil elastase and hence enhanced ability of the virus to infect human cells and spread among people.

“Compared with Asians, we found a large proportion of Caucasians in European countries and North America carry natural mutations in the gene that leads to deficiency in AAT production,” says Dr. Majumdar. “This is the reason why the variant spread widely in Europe and North America but not in Asia.” The results of the study are published in the journal Infection, Genetics and Evolution.

“Even the lowest AAT protein deficiency level seen in the population in the U.S. and Poland is much more than the highest level seen in East Asia. This explains why the variant with the D614G mutation spread widely in Europe and North America and not in East Asia,” concludes Dr. Majumdar.