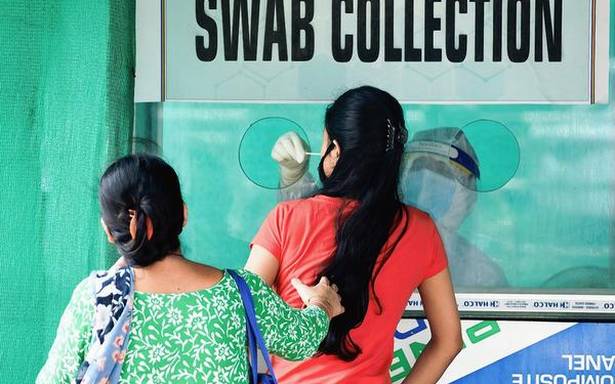 Unlike the rest of India, Kerala has maintained the same level of daily testing despite a reduction in number of cases

Kerala continues to contribute a high number of cases on a daily basis. However, there has not been any surge or spike in daily cases, as seen in other States. In reality, Kerala has been witnessing a steady decline in daily cases since end-January.

While other States have reduced the number of daily tests in recent months, Kerala has been continuing with the same number of daily tests. “The seven-day average daily tests conducted was over 60,000 when the test positivity rate was 15% during the peak in the first half of October last year. Now, even when the test positivity rate is under 5% seven-day average, the average testing has increased to 70,000 since the first week of February,” says Dr. John.

“Keeping daily testing at high levels even when daily cases are declining inspires more confidence that the decline in daily cases is real and is not due to reduced testing,” Dr. John adds. Maharashtra and Gujarat have not increased testing despite reporting more cases on a daily basis.

While the rest of the country witnessed a peak in mid-September when the daily fresh cases touched nearly 98,000 on September 16, Kerala witnessed a peak a month later in mid-October. Unlike other States that witnessed a steady decline in daily cases, there were a reduced number of daily cases in Kerala since mid-October, but the numbers continued to stay high and did not steadily decline to low levels.

“The first wave is yet to decline in Kerala. The daily cases have plateaued in the State for a long time and are now seeing a decline,” says Dr. Raman Gangakhedkar, former chief epidemiologist of ICMR who was a part of the national COVID-19 task force till he retired in June last year. “There has not been any resurgence of cases lately [in Kerala].”

According to Dr. Giridhara Babu, epidemiologist at the Public Health Foundation of India, Bengaluru, the decline in cases since late January could be due to high infection rate that is close to herd immunity needed for the decline to begin.

“If the seven-day average test positivity rate stays below 5% for a few weeks it indicates that the pandemic is under control,” says Dr. Gautam Menon, Professor of Physics and Biology at Ashoka University and co-author of COVID-19 modelling studies. Dr. Menon attributes the decline in daily cases to the long duration of background seroprevalence across the State, and so new infections are only expected to decline.

“The long plateauing of cases has ensured a good fraction of people have experienced an infection. In the circumstances, one can expect a decline in daily numbers across the State. But the only way to check this is through serosurvey,” Dr. Menon adds. “My guess is that about 40% of the population would have been infected. This is just my guess.” Based on anecdotal evidence, Dr. Menon says aggressive tracing and quarantining would have contributed to the decline in cases. “Unlike Kerala, other States have not been able to pick up a steady increase in cases in the rural areas,” he says.

Refuting the possibility of widespread infection in the population taking it close to herd immunity contributing to the decline in cases, Kerala Health Secretary Dr. Rajan N. Khobragade says that as per the third countrywide serosurvey conducted by the ICMR between December 17, 2020 and January 8, 2021, the seropositivity in the State was only about 11.5%. “So nearly 82% of the population in the State have not got infected,” Dr. Khobragade says.

Dr. Khobragade’s assertion of low seroprevalence in the State is supported by Dr. Anurag Agrawal, Director of the Institute of Genomics and Integrative Biology (IGIB), a CSIR lab in Delhi. “The second serosurvey carried out across CSIR labs found Kerala had the lowest seropositivity,” says Dr. Agrawal.

“The State has managed to stretch the curve such that the new infections are spread out over a longer period of time. The State also continues to undertake more testing and reporting,” Dr. Agrawal says.

“For the first six months, the outbreak was minimal in the State. We have been undertaking active case finding in the State. Anyone with influenza-like illness is tested for coronavirus infection,” Dr. Khobragade says.

Dr. Khobragade also cites 30-40% bed occupancy for patients with COVID-19 as proof that the State did not experience large-scale spread of the virus in the population. “Our healthcare system was never overwhelmed by COVID-19 patients. There has been not one instance when COVID-19 patients have been denied admission in a hospital due to bed shortage,” he says.

Kerala in collaboration with IGIB was the first to begin sequencing the genome of samples collected from all the 14 districts to identify any variants/escape mutants. “We began discussion with the State government in September, and the programme became operational in December,” says Dr. Agrawal. “They collect 25 samples from each district per week from people with high viral load, extract the RNA and ship the samples at low temperature. This really helps the operations as we can begin sequencing immediately on getting the samples. Their support is outstanding.”

Over 1,000 samples sent from Kerala have been sequenced so far. “This is the largest number sequenced from any State,” adds Dr. Agrawal. “We did not find anything of concern, in terms of variants/mutations in the genomes we sequenced from Kerala.”