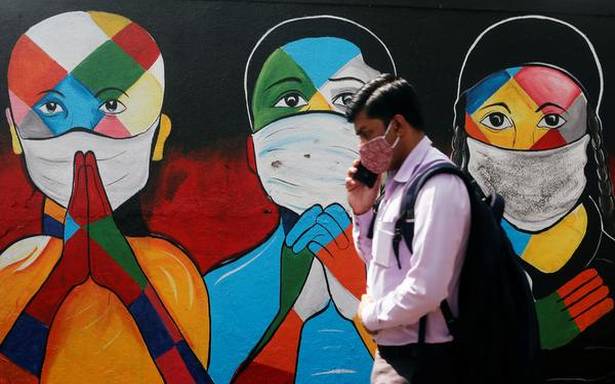 The cumulative number of healthcare workers vaccinated against COVID-19 is at 12,72,097 (till 6 p.m. on Friday) through 24,397 sessions, as per a provisional report of the Health Ministry.

The Ministry added that 267 cases of Adverse Effect Following Immunisation (AEFI) have been reported till 6 p.m.

Covaxin yet to show potency against U.K. strain

Bharat Biotech’s COVID-19 vaccine candidate, Covaxin, can produce neutralising antibodies — a requirement to study its efficacy — against multiple coronavirus variants, but is yet to demonstrate efficacy against the variant ‘B.1.1.7’ or the ‘UK strain’ as the new virulent strain is commonly known.

A report in the medical journal Lancet, published on Friday, underlines the need for “more extensive phase 2 and phase 3 trials” for “long term safety assessments” of the vaccine. The study centres around establishing the safety and immune response generated by different doses of the vaccine in 375 volunteers. The authors of the study include scientists from the Indian Council of Medical Research (ICMR) and Bharat Biotech.

Though much of the data in the Lancet has already been reported in a pre-print and made public on December 15, Friday’s article has an update on the antibody response to three different kinds of coronavirus strains.

Covaxin has been developed on a strain cultured by the ICMR-National Institute of Virology that contains a widespread mutation called D614G. This variant has been widespread in India for at least six months. When compared to two older strains, (sourced from those with travel history to Italy, Iran and China) there was a roughly similar kind of neutralising antibody (NAB) response. However, no data was furnished on how it reacted to more recent strains, such as B.1.1.7.

After initial hiccups, rising confidence for vaccination in Bihar

After days of lukewarm response from frontline health workers for COVID-19 vaccine jabs in Bihar, the turnout rose sharply on Thursday as the State Health Department started registration for the second phase of the vaccination drive.

On January 21, however, the figure rose and 54.6% of the registered beneficiaries turned up to get the shot across the State. The State Health Department also started registration of frontline workers on the Co-WIN digital platform for the second phase of the vaccination drive. “As many as 39,152 beneficiaries of various departments were registered by January 21 for the vaccination in the second phase,” said Patna-based civil surgeon Dr. Vibha Kumari Singh.

Do not hesitate to get vaccinated, says 94-year-old former T.N. Health Minister

Former Health Minister H.V. Hande, who received the COVID-19 vaccination at Government Kilpauk Medical College (KMC) Hospital recently, urged people not to hesitate when it is their turn to get vaccinated.

“I am 94 years old and had the vaccine not only for my own safety but also as a civic duty, because the only way to defeat the virus is if more people get vaccinated. I do not want to be an instrument through whom the virus can spread to others,” he wrote in a letter.

He added that the vaccine was “almost painless” and he had no side effects. “I know the importance of vaccination because as Health Minister of Tamil Nadu, I was actively associated with the Rotary Club of Madras in launching the red measles vaccine and later the polio vaccine. That is how we eradicated polio in India,” he said.

Noting that Covishield vaccine was available at the centre (KMC), he said he would not have hesitated to take any vaccine that the Central government recommended. “So when it is your turn to get the vaccine – do not hesitate. It is a service we owe our country,” he said.

Although there are concerns about patients developing issues post-COVID-19, including heart problems, a study involving 280 recovered healthcare workers at the State-run Sri Jayadeva Institute of Cardiovascular Sciences and Research has revealed that none of them had any cardiac problem.

Institute director C.N. Manjunath told The Hindu that the 280 patients, half of whom are female employees, were evaluated through ECG, Echo, X-Ray Chest and Cardiac MRI. “There was no cardiac involvement in any one of them,” he said.

The age of the 280 patients varied from 23 years to 60 years. While 30 are doctors, the rest are staff nurses, technicians, ward helpers, security and housekeeping staff. Although none of them had any pre-existing cardiac issues, 15% had hypertension and diabetes.

The Karnataka High Court on Friday gave the green signal to the Visvesvaraya Technological University to conduct semester-end exams in offline mode for over 2 lakh students in the State.

The High Court directed the VTU to ensure that Standard Operating Procedure (SOP) is strictly adhered to while conducting exams, commencing on February 8. The exams are being conducted from Semesters 1 to 7 for students in engineering colleges affiliated to VTU.

Justice R. Devdas passed the order while disposing of petitions filed by Shreyas P.S. and 119 other students, several of them non-Karnataka students.

Questioning conduct of exams in offline mode during COVID-19 pandemic, the petitioners had sought a direction to the VTU to hold exams online while contending that many of them are required to come to Karnataka to appear for the exams.

Brazilian President Jair Bolsonaro thanked Prime Minister Narendra Modi for providing two million doses of COVID-19 vaccines to fight the pandemic in his country, one of the worst-hit nations.

India, one of the world’s biggest drugmakers, on January 22 began commercial exports and sent two million doses of Covishield, developed by AstraZeneca and the University of Oxford, to Brazil.

“Namaskar, Prime Minister @narendramodi. Brazil is honoured to have a great partner to overcome a global obstacle. Thank you for helping us with vaccine exports from India to Brazil. Dhanyavaad!” Mr. Bolsonaro tweeted on January 22.

Hong Kong’s government locked down an area of Kowloon peninsula on January 23, saying its 10,000 residents must stay home until all of them have been tested for the new coronavirus and results largely determined.

The government said there were 70 buildings in the “restricted area” of Jordan and that it aims to finish the process within about 48 hours, so that people can start getting to work on January 25.

Hong Kong authorities have taken aggressive measures to combat the COVID-19 pandemic in the Asian financial and airline hub, but Saturday’s move is the first lockdown in theChinese-ruled city.

Many buildings are old and poorly maintained in the small,densely populated area, where subdivided units are common, said health secretary Sophia Chan.

Pfizer on Friday committed to supply up to 40 million doses of its COVID-19 vaccine this year to a World Health Organization-backed effort to get affordable shots to poor and middle-income countries.

The commitment, announced at a virtual press conference held by the Geneva-based WHO, is seen as important because Pfizer and its partner BioNTech last month won the first vaccine emergency authorizations from WHO and the U.S. Food and Drug Administration.

Pfizer’s 40 million doses — for a vaccine requiring two doses — are a tiny sliver of what’s needed for COVAX, which aims to vaccinate billions of people in 92 low- and middle-income countries.

Google says it has banned a prominent German user of its YouTube video platform who had repeatedly posted false claims about the coronavirus outbreak.

Google said Friday that a YouTube channel known as KenFM was no longer available and that the person operating it would not be allowed to start another.

“We have long standing community guidelines policies that strikes are issued when our systems are notified of a policy violation of the rules for how to behave on YouTube,” the company said in a statement.

“Videos on the channel KenFM violated our COVID-19 policies and the channel was removed from YouTube after receiving the third strike for a video within 90 days on November 19th, 2020,” it said.

British Prime Minister Boris Johnson on Friday said early evidence suggests that the new variant of coronavirus that was detected in England towards the end of last year may be associated with a higher degree of mortality.

Based on preliminary data briefing by scientists at the New and Emerging Respiratory Virus Threats Advisory Group (NERVTAG), Mr. Johnson admitted that it would seem the new variant was deadlier but stressed that the two vaccines being administered in the UK — Pfizer/BioNTech and Oxford/AstraZeneca — are effective against all variants.

“In addition to spreading more quickly, it also now appears that there is some evidence that the new variant – the variant that was first identified in London and the south east [of England] – may be associated with a higher degree of mortality. It is largely the impact of this new variant that means the NHS [National Health Service] is under so much intense pressure,” Mr. Johnson said in his address at a virtual briefing from 10 Downing Street in London.