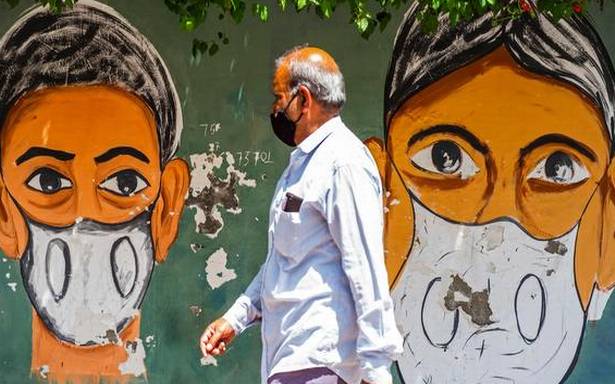 India recorded the highest single-day rise in coronavirus cases in six months with 89,129 new infections in a span of 24 hours, taking the COVID-19 tally of cases to over 1.23 crore, according to State Health Departments and Ministries on Saturday.

Olympic-bound Indian archers, who are based at the Army Sports Institute in Pune, will get their second dose of COVID-19 vaccine next week before leaving for the upcoming World Cup Stage I in Guatemala City.

The World Cup Stage I, to be held from April 19, will be the first tournament for the senior archers in COVID-19 era. The archers will compete in three World Cups, with the third being a Olympic qualification before the Tokyo Games in July.

As part of their vaccination drive, the ASI inoculated all the archers, which included the eight frontline Indians — Atanu Das, Tarundeep Rai, Pravin Jadhav and B Dhiraj (reserve) in men’s and Deepika Kumari, Ankita Bhakat, Komolika Bari and Madhu Vedwan (reserve) in women’s.

Cracking the whip against the violators of coronavirus-related protocols, the Delhi Police issued 11,800 challans for not following the face mask rule and 125 for not maintain social distancing in the last two weeks amid a recent spike in the cases.

According to data shared by the Delhi Police, a total of 5,78,324 challans have been issued since June 15 till Friday, including 5,36,256 for not wearing face masks and 38,631 for not maintaining social distancing.

A total of 2,720 challans were issued to people for not wearing face masks from March 10 to March 19, which translates to an average of 272 challans per day. Thirty-three challans have been issued in the same period for violating social distancing, the Delhi Police data said.

Eight groundstaff members at the Wankhede Stadium have tested COVID-19 positive during the tests conducted ahead of the Indian Premier League’s (IPL’s) 2021 edition. The Wankhede is scheduled to host 10 league games from April 10 to 25.

The Hindu understands all the 19 groundstaff members at the Wankhede Stadium underwent RT-PCR tests over the last week. While three were confirmed to have contracted the virus during the tests conducted on March 26, five more test reports conducted on April 1 returned positive on Friday.

The Bangladesh government has decided to impose a week-long nationwide lockdown from April 5 as COVID-19 cases and deaths surged across the country.

Road Transport Minister Obaidul Quader made the announcement at a media briefing in Dhaka on April 4, the Dhaka Tribune newspaper reported.

In a bid to arrest the spread of the coronavirus, the government has decided to enforce a seven-day lockdown from Monday as the coronavirus cases and deaths are surging across the country, Quader, also the general secretary of the ruling Awami League, said.

However, the order does not apply to utility and emergency services.

He thanked doctors and scientists in a tweet after being administered the vaccine, and said the Centre should allow the vaccination without age restrictions.

Bengaluru police have stepped up patrolling to ensure strict implementation of the new restrictions and guidelines imposed by the Karnataka government. Gyms shut their doors on April 3 while many churches have restricted the attendance of people for Easter services on April 4.

“We are monitoring public places and areas that usually see heavy footfall to ensure enforcement of fresh guidelines. Any violations will be dealt with strictly and those failing to follow the rules will be penalised,” a senior officer said. — Anjali Thomas

Eight states witnessed a steep rise in daily new COVID-19 cases and accounted for 81.42 per cent of the infections reported on Saturday, the Union Health Ministry said.

RELATED:  SC rejects plea for protection from arrest by 'Tandav' makers, others

Veteran politician and National Conference president Farooq Abdullah, who tested positive for COVID-19 recently, was on Saturday admitted to a hospital as a precautionary measure.

Taking to Twitter, his son Omar Abdullah said Farooq Abdullah has been admitted to hospital in Srinagar based on the advice of doctors “to enable them to better monitor” him.

“Our family remains grateful to everyone for their messages of support and their prayers,” he added.

The 85-year-old NC president tested positive for COVID-19 on Tuesday. He was kept in home-isolation initially, but doctors on Saturday decided to shift him to a hospital for better medical care.

Several leaders, including Prime Minister Narendra Modi, wished him a speedy recovery after news of his testing positive for the disease came to light.

Properly fitted multilayer masks block 84% of particles expelled by a person wearing it, while two people donning these types of masks can reduce transmission by close to 96%, according to a new study.

While wearing a face mask can protect people from COVID-19, scientists, including those from Georgia Institute of Technology in the U.S., said the type of material, tightness of fit, and the number of fabric layers used can significantly affect exposure risk to the novel coronavirus.

The study, published in the journal Aerosol Science and Technology, measured the filtration efficiency of ultrasmall submicron particles passing through a variety of different materials.

“A submicron particle can stay in the air for hours and days, depending on the ventilation, so if you have a room that is not ventilated or poorly ventilated then these small particles can stay there for a very long period of time,” said Nga Lee (Sally) Ng, a co-author of the study from the Georgia Institute of Technology.

India on Saturday recorded 89,129 new COVID-19 cases in a day, the highest daily rise in around six-and-half-months, taking the nationwide tally of infections to over 1.23 crore, according to the Union Health Ministry data on Saturday.

The jump in cases reported on Saturday was the highest since September 20 last year when 92,605 new infections were recorded in a span of 24 hours.

Argentine President Alberto Fernandez has tested positive for the new coronavirus, is waiting for the result to be confirmed and is in good spirits despite having a light fever, the first-term Peronist leader tweeted on Saturday.

“I am in good physical condition,” the president, who turned 62 on Friday, said in a tweet. He had received Russia’s Sputnik V vaccine against the coronavirus early this year.

‘Serious concern’ over COVID-19 in 11 States/UTs

The current COVID-19 case growth rate of 6.8% in March 2021 has surpassed the previous record of 5.5% (June 2020), noted a release issued by the Central government following a meeting chaired by the Cabinet Secretary Rajiv Gauba on Friday.

The government has also identified 11 States/UTs as areas of grave concern — Maharashtra, Punjab, Karnataka, Kerala, Chhattisgarh, Chandigarh, Gujarat, Madhya Pradesh, Tamil Nadu, Delhi and Haryana. These States/UTs have been reporting a surge in daily cases and daily mortality because of COVID-19 in the last two weeks. The meeting was to review and discuss the COVID-19 management and response strategy.

“Another worrisome aspect pointed out at the meeting was that Tier 2 and Tier 3 cities along with peri-urban areas have recorded a surge in COVID-19 cases. The spread of infection to the rural areas with weak health infrastructure would overwhelm the local administration,”’ noted the release.

Eight groundstaff members at the Wankhede Stadium have tested COVID-19 positive during the tests conducted ahead of the Indian Premier League’s (IPL’s) 2021 edition. The Wankhede is scheduled to host 10 league games from April 10 to 25.

The Hindu understands all the 19 groundstaff members at the Wankhede Stadium underwent RT-PCR tests over the last week. While three were confirmed to have contracted the virus during the tests conducted on March 26, five more test reports conducted on April 1 returned positive on Friday.

Strict restrictions in Maharashtra in the coming days: Uddhav

Maharashtra Chief Minister Uddhav Thackeray on Friday said that strict restrictions would be implemented in the State in the coming days, adding he did not want to impose a lockdown on the people but would be left with no option if COVID-19 cases continued to rise in the present manner.

“I have been getting calls enquiring whether a lockdown would be imposed in the State. I am only warning today; I am not announcing anything. I will be watching for the next two to three days and discussing with various stakeholders. I will announce strict restrictions in the coming few days. We have to stop this wave and ensure there is no third wave. It is not a one-way process; both sides have to work hard. I expect cooperation like last year,” said Mr. Thackeray, in his address to the State.

(With inputs from our Correspondent, agencies)