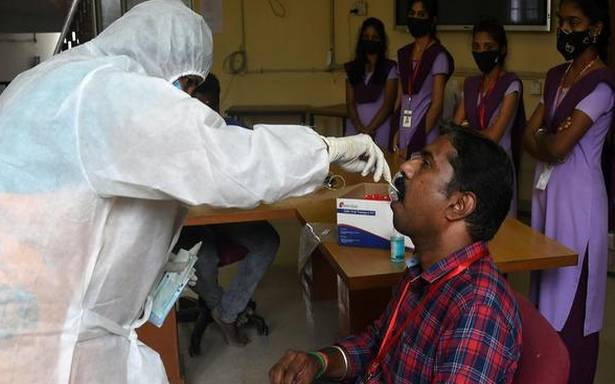 A total of 6 samples of 6 U.K.-returnees have been found to be positive with the variant of SARS- CoV-2 virus reported from U.K.

“3 inNIMHANS, Bengaluru, 2 in CCMB, Hyderabad and 1 in NIV, Pune,” said information released by the Health Ministry. It added that all these persons have been kept in single room isolation indesignated Health Care facilities by respective StateGovernments.

In the U.S., a huge study of another COVID-19 vaccine candidate got underway as states continue to roll out scarce supplies of the first shots.

Deaths per million in last seven days in India is 2, says Health Secretary

Aviation Minister Hardeep Singh Puri Tuesday said he foresees a slight extension of temporary suspension of passenger flights between India and the UK, where a new variant of the coronavirus has been detected.

The Civil Aviation Ministry had last week suspended all flights between that country and India from December 23 to December 31 over the mutated variant of the virus.

“I foresee a slight extension of temporary suspension of India-UK flights,” the minister told a press conference.

“In the next day or two, we will find out if any additional steps need to be taken, or when we can start easing the current temporary suspension,” he said.

Delhi Chief Minister Arvind Kejriwal on Tuesday reassured the city’s residents by asserting that the national capital is prepared to deal with the new mutant strain of the novel coronavirus.

“Delhi has witnessed three waves of coronavirus and the third wave was an intense one when cases went up to 8,500 (fresh cases reported daily) but we managed to control it. We are fully prepared to deal with it,” Mr. Kejriwal told reporters in response to a question on preparedness for the new strain of COVID-19 that first emerged in the UK a few days ago.

Shailza was undergoing treatment at Dr Rajendra Prasad Government Medical College, Tanda, in Kangra district of the state, after testing positive for COVID-19 a few days ago.

Identified ”beneficiaries” are undergoing dummy vaccination at various centres in Gandhinagar and Rajkot districts of Gujarat on the second day of the COVID-19 vaccination dry run on Tuesday, officials said.

The two-day end-to-end dry run was being carried out to test the laid out mechanisms for COVID-19 vaccination and to provide insights into any gaps to be addressed before the commencement of the actual vaccination drive.

Gujarat is one of the four states chosen by the Central government to conduct the mock COVID-19 vaccination drive.

The Chinese city of Wuhan, where the novel coronavirus emerged a year ago before it became a pandemic and upended life across the globe, has started the emergency COVID-19 vaccination on some key groups, a senior health official said on Tuesday, even as China is yet to officially certify its multiple vaccines.

The vaccination, available at 48 designated clinics in 15 districts, began on December 24, targeting certain groups of people aged between 18 and 59 years, He Zhenyu, deputy director of the centre for disease control and prevention in Wuhan, told the media in Wuhan.

Those receiving the vaccine need to take two shots with an interval of four weeks, the state-run Xinhua news agency quoted He as saying.

Union Minister of State for Health Ashwini Kumar Choubey has said that he has tested positive for COVID-19 and is under home isolation.

In a tweet, Mr. Choubey informed on Monday that he underwent a test after showing initial symptoms of coronavirus infection.

The daily new coronavirus infections in India dipped below 20,000 for the third time this month taking the COVID-19 caseload to 1,02,24,303, while the recoveries crossed 98 lakh, according to the Union Health Ministry data updated on Tuesday.

The COVID-19 active caseload remained below 3 lakh for the eighth consecutive day.

While a release from PIB confirmed that three persons, including a 34-year-old woman and her six-year-old daughter, who returned to Bengaluru from the U.K. on December 19, were found positive through genome sequencing of their samples at Nimhans, highly placed sources from the Union Health Ministry told The Hindu that four more samples from Bengaluru had tested positive for the new variant.

Telugu film star Ram Charan on Tuesday said he has tested positive for the novel coronavirus and is under home quarantine.

“I have tested positive for Covid-19. No symptoms and quarantined at home. Hope to heal soon and come out stronger,” he said in a statement.

The House has voted to increase COVID-19 relief checks to $2,000, meeting President Donald Trump’s demand for bigger payments and sending the bill to the GOP-controlled Senate, where the outcome is uncertain.

Health, Home departments to track those who have arrived from U.K. in Karnataka

Speaking to reporters on Monday, Health and Family Welfare and Medical Education Minister K. Sudhakar said that they were unable to trace some of the passengers as their mobile numbers were switched off. “We have appealed to them through the media several times and asked them to cooperate. Despite this, many have not got tested nor are in touch with the state government,” he said. The State government has made it compulsory for passengers coming from U.K. to undergo RT-PCR tests.

More COVID-19 vaccines in pipeline as U.S. ramps up effort

A huge U.S. study of another COVID-19 vaccine candidate got underway as states continue to roll out scarce supplies of the first shots to a nation anxiously awaiting relief from the catastrophic outbreak.

Public health experts say more options in addition to the two vaccines now being dispensed — one made by Pfizer and its German partner BioNTech, the other by Moderna — are critical to amassing enough shots for the country and the world.The candidate made by Novavax Inc is the fifth to reach final-stage testing in the US.