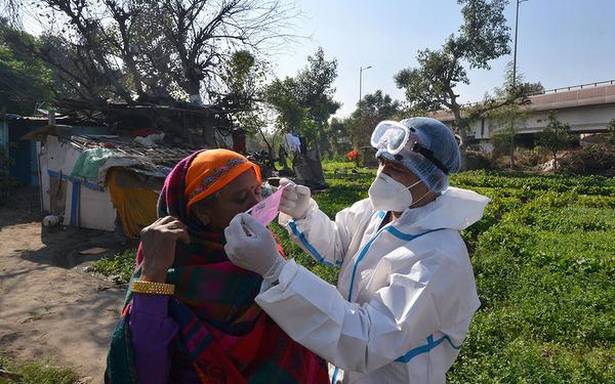 Union Health Minister Harsh Vardhan on Monday said the government was on alert on the new strain of the SARS-CoV-2 virus in the UK but said there was no need to panic. The Ministry of Civil Aviation also announced its decision to ban all flights to the U.K. from December 22 midnight until December 31 in an effort to keep out a new highly infectious coronavirus strain that is rapidly spreading in England.

Meanwhile, the EU finally gave the green light for the Pfizer-BioNTech coronavirus vaccine on Monday, paving the way for the first inoculations to start across 27 countries just days after Christmas.

The strain being discussed has undergone 17 changes and one of the changes is responsible for the area through which virus enters human cell. Due to this mutation, the tendency to enter human cell has become higher. It has increased the virus’ transmissibility (said to be 70%). In a way it has become a super spreader, he explains.

As many as 4 lakh new cases came in the past 24 hours in US, Brazil is also witnessing new peak, with 70,000 cases in one day, says Health Secretary Rajesh Bhushan.

Case per million population is 7,300 in India, among the lowest in the world, against the world average of 9,697 cases.

Deaths per million population is also among the lowest in the world. It is 106 against the world average of 216.

New cases per million population reported in the last seven days are 124 in India, compared to 588 in the world.

New deaths per million population reported in the last seven days are two in India, compared to 10 in the world.

Health condition of passengers arriving from U.K. recently to be checked: Delhi government

Amid mounting concern over a new strain of COVID-19 detected in the U.K., the Delhi government on Tuesday said it will visit the houses of passengers who have arrived at New Delhi recently from the U.K. to check their health condition.

All passengers arriving from the U.K. are now being tested for COVID-19 at Delhi airport, Health Minister Satyendar Jain told reporters.

“The Delhi government is on alert in the wake of a mutated coronavirus strain detected in the U.K. The situation is being closely monitored and mandatory tests are being conducted at the Delhi airport for all passengers arriving from that country,” he said.

Mr. Jain said Delhi has fought difficult battles with COVID-19 and all efforts will be made to ensure that the improvement made in the management of the pandemic is “not reversed”.

The Civil Aviation Ministry on Monday said all flights from the U.K. to India and vice-versa will remain suspended from Wednesday to December 31 in view of the emergence of a mutated variant of the coronavirus there.

Turkey has quarantined 4,600 arriving from U.K.

Turkey has identified and quarantined 4,603 airline passengers who arrived from the United Kingdom on and after December 14, Turkish Health Minister Fahrettin Koca said on Tuesday.

Flights from the U.K., South Africa, Denmark and the Netherlands were suspended on Sunday evening in response to a new strain of coronavirus said to be circulating there.

Mr. Koca tweeted that 335 passengers flying from those countries at the time of Sunday’s announcement were tested for the virus on arrival in Turkey and isolated. Many countries have restricted travel, primarily from Britain, after the new strain was described as spreading rapidly there.

A passenger who arrived at Chennai from London via Delhi has tested positive for coronavirus and genomes from his sample would be analysed to see if it matched with the new strain of the pathogen detected in the United Kingdom, a senior official said on Tuesday.

The passenger, who tested positive has been admitted to the State-run King’s Institute of Preventive Medicine and Research, Health Secretary J Radhakrishnan said.

His sample would be sent for genomic analysis to National Institute of Virology, Pune for confirmation, he told reporters. “It has to be seen if it matches with that of the strain seen in the U.K.” Also, over 1,000 passengers who arrived from the U.K. in the past about 10 days were being monitored for symptoms.

All international passengers, on arrival, were being tested for coronavirus and they have been advised home or institutional quarantine for 14 days as per guidelines, he said. The Greater Chennai Corporation authorities in coordination with Public Health Department were monitoring the health status of returnees by following measures already in place, he said.

Six passengers, who travelled on Air India’s London- Delhi flight, that arrived on Monday have tested positive for COVID-19.

Several Indian-American physicians publicly take COVID-19 vaccine, encourage others to get it

Several Indian-American physicians, in the frontline of the fight against the pandemic, are publicly taking the coronavirus vaccine and encouraging others to get the shots, emphasising that the vaccine is the “only saving grace” and a “scientific blessing” that will help the world win the battle against COVID-19.

The U.S. began administering vaccines a week ago and has approved jabs developed by Pfizer-BioNTech and Moderna. “We all should take the vaccine. It is very effective and we are seeing good results. The vaccine is the only saving grace we have right now and we have to take it,” former President of the American Association of Physicians of Indian Origin (AAPI) Dr. Suresh Reddy told PTI.

Social-distancing norms were flouted at a BJP MLA’s wedding in Pune, with hundreds of people attending it and many of them, including senior party leaders, not bothering to wear masks.

Congress passed a $900 billion pandemic relief package that would finally deliver long-sought cash to businesses and individuals and resources to vaccinate a nation confronting a frightening surge in COVID-19 cases and deaths.

Lawmakers tacked on a $1.4 trillion catchall spending bill and thousands of pages of other end-of-session business in a massive bundle of bipartisan legislation as Capitol Hill prepared to close the books on the year. The bill approved Monday night went to President Donald Trump for his signature, which was expected in the coming days.

Two passengers from the U.K. were found positive for COVID-19 after they arrived at the airport in Kolkata, health department officials said on December 22.

“Twenty-five passengers did not have COVID reports with them. So they were taken to a nearby quarantine centre, and their coronavirus tests were conducted. Two tested positive,” the West Bengal Health and Family Welfare Department official said.

No proposal on night curfew for now: Karnataka CM

Karnataka Chief Minister B.S. Yediyurappa has ruled out the possibility of night curfew in Karnataka.

“There is no such proposal for now,” said the Chief Minister, replying to reporters on whether Karnataka will follow Maharashtra that has imposed an 11 p.m. to 6 a.m. night curfew till January 5 in Mumbai and other cities in the light of the new strain of the Coronavirus that has emerged in the United Kingdom.

Mr. Yediyurappa said Karnataka was taking all precautions, including curbs ahead of New Year, and there was no need to panic.

The flight landed around 11.30 p.m. on December 21. “Five passengers were found COVID-positive at the Delhi airport. One passenger, who took a connecting flight to Chennai, was tested there and found positive,” the official said.

The application was filed under Health Canada’s “Interim Order Respecting the Importation, Sale and Advertising of Drugs for Use in Relation to COVID-19,” a release from the city-based drug maker said.

34 arrested from club in Mumbai for flouting COVID-19 norms

Police conducted a raid on a club near Mumbai airport in the early hours of Tuesday and arrested 34 people for allegedly violating the COVID-19 prevention norms, an official said.

The police action came after the Maharashtra government on Monday declared a night curfew in municipal corporation areas as a precautionary step amid growing concerns over a new coronavirus variant spreading in Britain.

Vaccine maker Bharat Biotech has recruited 13,000 of the 26,000 volunteers for the ongoing phase-III clinical trials of its COVID-19 vaccine candidate Covaxin.

“We sincerely thank all the 13,000 volunteers across the country for their support in enabling us to bring out a safe and efficacious Indian vaccine for COVID-19. This pro-vaccine public health volunteerism is a morale boost for us to achieve our milestone target of 26,000 soon – Thank you volunteers,” said Suchitra Ella, Joint MD, Bharat Biotech.

The number of daily new coronavirus infections reported in the country was recorded below 20,000 after nearly six months while the COVID-19 active caseload fell below 3 lakh, according to the Union Health Ministry data updated on December 22.

Developers of the Russian coronavirus vaccine Sputnik V on Monday announced signing an agreement with AstraZeneca to test a combination of the British drugmaker’s COVID-19 shots and a component of the vaccine created in Moscow.

The developers of Sputnik V proposed the approach to AstraZeneca last month, suggesting it could increase the effectiveness of the British vaccine. The company announced on December 11 a study to test the combination, and on Monday signed a memorandum of cooperation with Moscow-based medical research facility the Gamaleya Institute, the Russian Direct Investment Fund and Russian drugmaker R-Pharm.

The European Medicines Agency (EMA) recommended the vaccine developed by US pharma giant Pfizer and German firm BioNTech for use, and the European Commission formally approved it hours later.