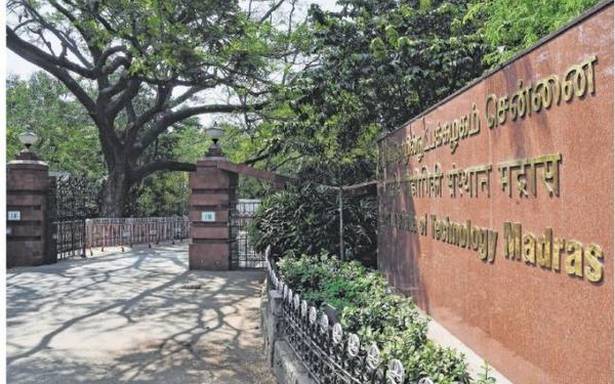 The IIT-Madras cluster of COVID-19 infections that was detected in early December created a flutter in Tamil Nadu, which is otherwise seeing a drop in the number of cases. A blitzkrieg operation by the Chennai Corporation, the State Health Department and IIT officials seems to have stemmed the transmission. As other institutes start reopening gradually, the harsh lessons learnt from this experience must not be overlooked.

On December 9, officials of the Greater Chennai Corporation and the Health Department realised that a cluster of COVID-19 cases was emerging at one of the premier academic institutions in the city — the Indian Institute of Technology (IIT)-Madras. A number of factors were at play, but at the top of the list of possible sources of infection was a dining hall where 700-odd students residing in hostels dined, and common toilets.

The ‘IIT cluster’ may not be as large in size as the previous clusters reported in the State, but it sounded an alarm for officials. With higher educational institutions reopening early this month, the outbreak of infections at IIT raised concerns about similar clusters in colleges and universities, prompting the State government to take up screening and testing of hostellers across the State.

At a time when fresh COVID-19 infections in the State are falling and the test positivity rate is below 2%, the IIT cluster showed that places of dining could turn into problematic areas and lead to a sharp spike in cases. Health officials saw this as a lesson for the public.

“We are not seeing any spurt in cases except from places where people converge, particularly dining places. There was no spurt in cases even after the festival season. So, we are giving special attention to closed spaces and crowded places, and contacts of positive persons,” Health Secretary J. Radhakrishnan told reporters on Friday.

Starting with sporadic cases from December 1, the IIT-Madras cluster, as of Friday, accounted for a total of 199 cases — 179 students, three persons in the quarters, 16 mess workers, and a carpenter. As many as 1,293 samples were tested from December 1 to 17, with 514, the highest, on December 14 alone.

High risk: As many as 199 cases of COVID-19 were reported at IIT-Madras till Friday, sparking concerns about similar clusters emerging at other institutes as they gradually open.
| Photo Credit:
Special Arrangement

Following a surge in the number of cases, the institute issued a circular on December 13 announcing that it will close down all departments, centres and the library immediately until further notice.

“We knew that there was a cluster of cases on the campus on December 9. That was when we had a large number of cases and the positivity rate increased. So, we started testing aggressively through saturation testing, that is, testing each and every person. Some persons were tested more than once due to history of contact with positive patients,” said Alby John Varghese, Greater Chennai Corporation’s (GCC) Regional Deputy Commissioner (South).

Those who tested positive were admitted to the government-run COVID-19 hospital in Guindy. “Next, we focused on quarantining all hostellers in their respective hostel rooms. With the help of the IIT management, we were able to ensure that all the students were quarantined in their own rooms immediately,” he said.

A majority of them were research and postdoctoral scholars. “So, contact among them was limited. We looked at the possible reasons for the spread of the infection, and two to three potential reasons emerged. We asked the IIT administration to close down the mess where students had dined over staggered timings. One of the major interventions was delivery of food to hostel rooms,” he said.

Officials pointed out that though there were a number of toilets, students often used the same facilities because they were not located on the same floor. The Corporation then deputed its staff to disinfect toilets and common areas once every two hours.

While officials are investigating the cause of the spread, lowering of guard with respect to COVID-19 safety measures may be a key reason. A few students said that while the institute was very stringent during the initial stages of the pandemic, enforcement of safety measures had weakened by November.

In particular, scholars pointed to frequent crowding at the Himalaya Mess — the only mess that was being operated until recently. Shared toilets, difficulties in monitoring staff and scholars coming from outside, and possible delay in testing contacts of affected persons are other reasons that may have exacerbated the situation.

An infected student undergoing treatment, who had remained on the campus through the most part of the pandemic, recalls that when students and scholars began returning to the campus in batches, they were required to stay at the guest house for 14 days before being allowed into the hostels.

“The institute had an application and selection process for those wanting to return to the campus. Day scholars were not allowed to come at that time,” the student said.

Another student, who has also tested positive, said that as the numbers were small, students were allocated rooms with attached toilets. In June, after a single case was detected in one of the hostels, the entire hostel was sanitised and everyone staying there was quarantined in the building for two weeks, he said.

However, after the government relaxed norms, more students started reporting back to the campus, and the cautious approach taken until then was put on the back burner, the students said.

Official sources said in the first two weeks of December, when the outbreak started, close to 800 students — mostly research scholars and a few undergraduate and postgraduate students — were staying in the hostels. Though the administration maintained that personal distancing was ensured in the 400-seater dining hall of the Himalaya mess and that students were allowed in batches of 100 for only 30 minutes, the rules were not effectively implemented.

“I personally have seen and waited in long queues for food with more than 150 students present at a time inside the dining hall. A section of those working in the mess, and some students as well, seemed to be careless about wearing masks and keeping distance from others at the service counters,” the student said. He added that though many of them raised concerns and called for more dining spaces to be opened, it was done only in December, and after the situation escalated, the food was now being sent to hostel rooms.

Another student, who is also undergoing treatment, alleged that even when a few students began testing positive earlier this month, their primary contacts were not traced and quarantined immediately. “These contacts were still going to the hostel mess to have food,” he said.

When contacted, the IIT administration, however, denied any negligence and said that every safety norm in accordance with government regulations was being followed.

“The Institute brought back research scholars who needed to do experiment work after the State Government permitted it. The Standard Operating Procedure (SOP) for their return, including their 14-day quarantine and RT-PCR testing, was worked out and implemented in consultation with the health authorities,” said an IIT-Madras spokesperson.

“Once allowed into the hostels, the students have undertaken not to leave the campus and go only to their labs and hostel rooms. The hostels are sparsely populated, with 750 students spread across nine hostels having a capacity of nearly 4,000. There are SOPs for the labs, too, to ensure physical distancing, which determine how many students can work in a lab at a given time,” he added.

The institute said it was quick to respond after the cases were first detected in early December, and that testing was ramped up to 75 per day soon after three cases were reported from one hostel on December 9.

Dr. Varghese said, “We contained the cluster without further transmission. Our first aim was to identify possible patients, treat them well, test the contacts, minimise mobility and ensure that the transmission is nipped in the bud.” Based on this experience from IIT, the GCC is now proactively doing routine tests in all educational institutions that have partially reopened, he noted.

Dr. Radhakrishnan said 161 hostels in 97 colleges have been covered so far in Chennai. “Our intention is to test once in 15 days. We will do saturation testing wherever a cluster has surfaced. In the remaining places, we will do intensive screening, and testing based on symptoms,” he added. More than 6,000 samples have been lifted so far.

Tests were performed for nearly all the students staying in hostels on the Anna University campus. S. Iniyan, Dean, College of Engineering, Guindy, Anna University, said over 800 persons, including students and staff, have been tested so far, and only seven have tested positive. “All of them are asymptomatic,” he said.

He added that research scholars and final year students of undergraduate and postgraduate courses were staying in hostels and arrangements had been made to provide separate rooms to each student and deliver food to their rooms.

What did government medical colleges do differently? R. Jayanthi, Dean of Government Omandurar Medical College, said that from the beginning, they prohibited group dining, closed the dining hall, and enforced distribution of takeaways to the respective hostel rooms for nearly 380 students.

E. Theranirajan, dean of Madras Medical College, where 777 students have returned to the campus after the institute reopened, said they made RT-PCR testing compulsory for students prior to their arrival. “Incoming students were told to quarantine themselves for 14 days in their hostel rooms,” he said.

With fresh COVID-19 cases on the decline in Tamil Nadu, the IIT-Madras cluster is a lesson for all. “First of all, this is a well-known phenomenon, to have outbreaks at academic institutions. The ability to transmit infection is very low in small children — those aged below 10 years. But university students are like any other adult and are highly susceptible to infection and highly prone to transmit [infections],” says T. Jacob John, retired professor of virology, Christian Medical College, Vellore. Strict precautions need to be in place — wearing masks at all times, maintaining physical distance, and stringent monitoring of eating areas. “We need to maintain a considerable distance of a minimum of two metres between persons while not wearing masks. When everyone wears a mask, safe physical distance can be just two feet between them. These norms should apply for those serving food too. With these rules in place, campuses can be infection-free. Otherwise, they could turn notorious for large outbreaks. What happened at IIT-Madras could happen with any academic institution as long as the pandemic continues and if discipline in following precautions is not strictly maintained,” he says.

(With inputs from Pon Vasanth B.A.)

Overall testing in colleges/hostels in Chennai

What actions were taken?