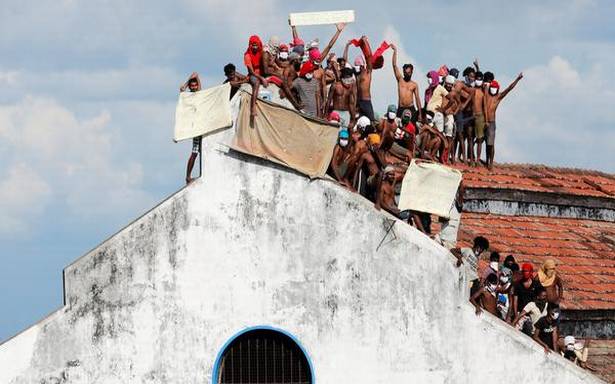 Guards opened fire Sunday to contain a prison riot near Sri Lanka’s capital where an inmate was killed and three wounded while protesting a surge of coronavirus infections, police said.

“Guards at Mahara have used force to control an unruly situation,” Mr. Rohana said. “One death (of a prisoner) is reported and three inmates have been injured.”

He said teams of Special Task Force personnel have been sent to bolster security at the prison.

Sunday’s clashes were the culmination of weeks of unrest in several prisons across the country as the number of COVID-19 cases within Sri Lankan jails exceeded 1,000 by Saturday. Two inmates have died of the virus.

Last week, a prisoner was killed when he fell off while trying to scale the walls of a prison in the central Bogambara region during unrest inside the jail.

Prisons across the country went into a lockdown last week as the authorities reported a surge in infections among inmates as well as guards.

The number of COVID-19 deaths across the country have also increased six-fold this month to 109 while the total infections more than doubled to 23,311. Sri Lanka had reported 19 deaths out of 10,424 people infected at the end of October.

The South Asian island nation of 21 million had claimed success in containing the virus first detected on January 27 in a Chinese woman tourist. Sri Lanka eased a three-month curfew on June 28, but a second wave of infections hit last month.

Authorities have said a newer and more virulent strain of the virus was now spreading in the island.

Schools in the country’s most populous Western Province remained closed while parts of the capital are also under a strict lockdown since last month.

RELATED:  Sharon Stone Recalls Paying For Leonardo DiCaprio In 'The Quick And The Dead' After Studio Refused