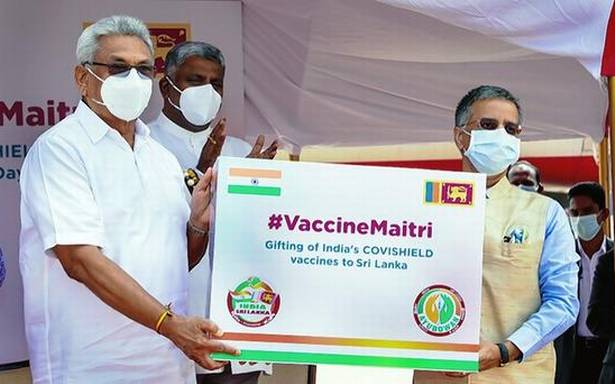 Vaccination will commence on Friday at six hospitals.

Sri Lanka on Thursday received 5,00,000 doses of COVID-19 vaccine gifted by India, the country’s first consignment as the island nation prepares to begin its roll-out.

President Gotabaya Rajapaksa, who received the vaccines from the Indian High Commissioner at the Bandaranaike International Airport on Thursday morning, tweeted: “Received 500,000 #COVID19 vaccines provided by #peopleofindia at #BIA today(28). Thank you! PM Shri @narendramodi & #peopleofindia for the generosity shown towards #PeopleofSriLanka at this time in need.”

Vaccination will commence on Friday at six main hospitals in Sri Lanka’s Western Province, a statement from President Rajapaksa’s office said. “Around 1,50,000 health workers, 1,20,000 members of the tri-forces, police and security forces who are at the frontline of COVID prevention operations will be given first priority,” the statement said.

Sri Lanka’s public health sector, along with the military, has been leading the country’s response to the pandemic, since it struck the island in March 2020. Sri Lanka, which controlled the first wave effectively, is currently witnessing a surge in the coronavirus cases, with the number of positive patients and deaths going up from 3,300 and 13, respectively, in early October to 60,694 infections and 290 deaths as of Thursday. In addition to reporting the recent U.K.-variant of the virus, scientists in Sri Lanka earlier this week identified another new strain, reported in countries such as Switzerland, Denmark, Iceland, and Germany.

India donated the vaccines to Sri Lanka following a request President Rajapaksa made to Prime Minister Narendra Modi. External Affairs Minister S. Jaishankar, who was in Colombo earlier this month, had assured Sri Lanka that India would give it “top priority” while dispatching vaccines in the region.

Over the past few weeks, the Maldives, Bhutan, Bangladesh, Nepal and Myanmar in the neighbourhood received vaccines from India, in addition to Mauritius, Seychelles, and Brazil and Morocco, that received them on a commercial arrangement.

The Indian High Commission in Colombo, on the eve of the arrival of the vaccines said, the consignment of COVISHIELD vaccine was arriving on the “auspicious Duruthu Poya Day” [full moon], in what it called “a remarkable coincidence”.

“As such the High Commissioner, who had first arrived in Sri Lanka to take up his assignment in the Vesak Week in May 2019 with 12.5 tons of medical …will pray at the sacred Gangaramaya Temple [famous Buddhist shrine in Colombo] for the health and wellbeing of the people of Sri Lanka on the day,” a press release said. “He will also seek the blessings of Ven. Dr. Kirinde Assaji Thero [senior Buddhist monk at the temple]. As per the Buddhist traditions in India and Sri Lanka, High Commissioner will offer meals to devotees at the Temple,” the statement said.

Coronavirus | Rajapaksa thanks India as vaccines arrive in Sri Lanka