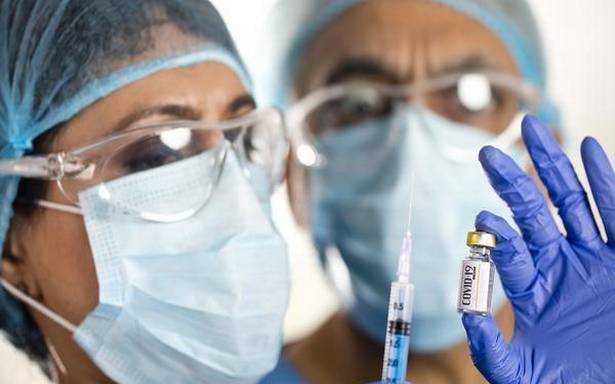 The challenge will be in continuing the trial with 25,800 participants till 130 cases are reported when there is a surge in many States

Bharat Biotech began the phase-3 trial of Covaxin on November 11, 2020 and completed the enrolment of all 25,800 volunteers on January 7, 2021. The last of the phase-3 trial participants received the second dose in the third week of February.

The company had planned to continue the phase-3 trial until 130 study participants developed the disease. The first and second interim analyses of phase-3 trial are planned to be conducted when 43 and 87 cases get reported. On March 3, Bharat Biotech announced the interim analysis of 43 cases; the vaccine was found to have an 80.6% point estimate of vaccine efficacy.

There are a fairly large number of participants in each group — 12,900 people in each arm — and as against 36 cases in the placebo group, there were just seven cases in the vaccine arm. “This is an unambiguous reflection of high vaccine efficacy, calculated as 80.6%. We will have to wait for the announcement of the 95% confidence range, but eyeball assessment is that it has to be fairly narrow on account of the huge denominator,” says virologist Dr. Jacob John, formerly with CMC Vellore.

The next interim analysis will be carried out when the total number of symptomatic COVID-19 cases reach 87. With the phase-3 trial beginning only on November 11, nearly two months after the pandemic had reached a peak in India, it took nearly four months for the first 43 cases to accrue.

“The total number of cases in the 25,800 study participants happened to be only 43 after nearly four months, which is a reflection of the relatively low prevalence of infection in the country during the trial period. The original expectation was that there would be 130 cases by end-February,” says Dr. John. “The epidemic in India peaked on September 16 and the trial started two months later. Hence, the lower-than-expected numbers are no surprise.”

Though an uptick in daily cases has been reported from 21 States, 10 States are witnessing a surge — Maharashtra, Punjab, Gujarat, Chandigarh, Madhya Pradesh, Karnataka, Chhattisgarh, Haryana, Delhi and Tamil Nadu. Of these, the situation is particularly concerning in Maharashtra, Punjab, Chandigarh and Gujarat. The 39,687 cases reported on March 18 is higher than what was reported on November 29 last year (39,036 cases). “There is a sustained and steady increase in cases in these 10 States, making it clear that the second wave has set in,” says Dr. Rijo John, Health Economist and Consultant based in Kochi. The seven-day average of daily cases has more than doubled from 10,986 on February 8 to 29,334 on March 18, a 167% increase; the test positivity rate has doubled from 1.6 to 3.2% during the same period.

There is a good possibility that the spike in cases in a handful of States would get reflected in the infection/disease frequency in the trial sites and trial participants. Though Bharat Biotech has 25 trial sites spread across 11 States, there are no trial sites in Punjab, Chandigarh and Kerala, which is still reporting high numbers. The company has five trial sites in Maharashtra (two in Mumbai alone), two sites in Tamil Nadu (including one in Chennai), Karnataka (Bengaluru being one), and Haryana but just one trial site in Gujarat, Madhya Pradesh and Delhi.

With daily cases increasing spiking in many States, Dr. Giridhara Babu, epidemiologist at PHFI, Bengaluru feels that many more States might witness a surge. How much the increase would be in each State would depend on numerous factors including daily testing rate, adherence to COVID-19 precautions and vaccination rate.

It would have probably taken four-six months for another 43 cases to accrue, but due to the spike currently seen in 10 States that endpoint would be reached earlier. According to reliable sources in Bharat Biotech, the company is expecting to reach 87 symptomatic cases end point earliest by April or latest by June. Dr. Babu thinks the final target of 130 cases too can be reached soon, considering the way the cases are spiking in many States.

Considering that recruitment and complete vaccination of all trial participants has been achieved, the drug regulator has to take a decision on the number of cases required for licensing. It could be either currently available cases, second endpoint of 87 cases or 130 cases as originally planned, for which the trial will have to continue for a longer time.

“The vaccine was approved for restricted emergency use under a ‘clinical trial mode’ even when no efficacy data was available. When the first interim analysis of 43 cases showed nearly 81% efficacy, the ‘clinical trial mode’ was removed. Since the vaccine is already rolled out to the priority groups, efficacy data from 87 or 130 cases is only of academic interest. It doesn’t make any difference on the ground,” says virologist Dr. Shahid Jameel, Director of the Trivedi School of Biosciences at Ashoka University. “It will be unethical to deny the vaccine to those participants in the placebo group who fall under any of the priority groups and thus eligible to receive the vaccine.”

Dr. Babu too feels it will be unethical to deny the vaccine to trial participants who are eligible to receive the vaccine, particularly when many States are reporting a spike in daily cases.

Dr. V. Ravi, neurovirologist formerly with NIMHANS says the second wave has already begun in India. He therefore expects another 43 symptomatic cases among the trial participants to show up by end-April. “We should wait for the second endpoint — 87 cases — before unblinding the trial,” he says. “Waiting for 130 cases, especially when cases are surging in many States, will unnecessarily put the trial participants who have received a placebo at great risk. It is unethical.”

“For feeling confident about high vaccine efficacy (80.6%), the available data are sufficient, but whether DCGI will feel confident to license the vaccine or not is a call the drug regulator alone can make,” says Dr. Jacob John.