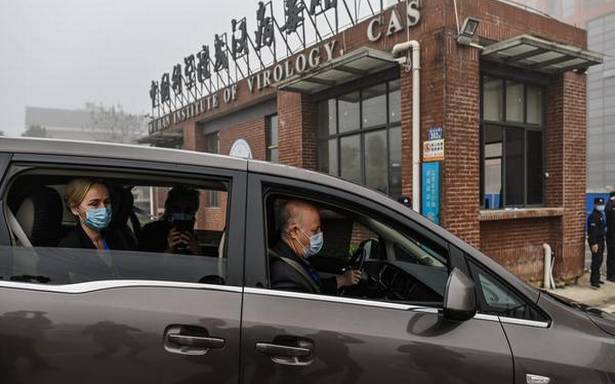 World Health Organisation (WHO) investigators on Wednesday visited a research centre in the Chinese city of Wuhan that has been the subject of speculation about the origins of the coronavirus, with one member saying they intended to meet key staff and press them on critical issues.

The WHO team’s visit to the Wuhan Institute of Virology is a highlight of their mission to gather data and search for clues as to where the virus originated and how it spread.

“We’re looking forward to meeting with all the key people here and asking all the important questions that need to be asked,” zoologist and team member Peter Daszak said.

Reporters followed the team to the high security facility, but as with past visits, there was little direct access to team members, who have given scant details of their discussions and visits thus far. Uniformed and plainclothes security guards stood watch along the facility’s gated front entrance, but there was no sign of the protective suits team members had donned Tuesday during a visit to an animal disease research centre.

Speculations on where COVID-19 originated

One of China’s top virus research labs, the institute built an archive of genetic information about bat coronaviruses after the 2003 outbreak of Severe Acute Respiratory Syndrome. That has led to unproven allegations that it may have a link to the original outbreak of COVID-19 in Wuhan in late 2019.

China has strongly denied that possibility and has promoted also unproven theories that the virus may have originated elsewhere or even been brought into the country from overseas with imports of frozen seafood tainted with the virus, a notion roundly rejected by international scientists and agencies.

The institute’s deputy director is Shi Zhengli, a virologist who worked with Daszak to track down the origins of SARS that originated in China and led to the 2003 outbreak. She has published widely in academic journalists and worked to debunk theories espoused by the former Trump administration and other American officials that the virus is either a bioweapon or a “lab leak” from the institute.

Following two weeks in quarantine, the WHO team that includes experts from 10 nations has visited hospitals, research institutes and a traditional wet market linked to many of the first cases. Their visit followed months of negotiations as China seeks to retain tight control over information about the outbreak and the investigation into its origins, possibly to avoid blame for alleged missteps in its early response.

Confirmation of the origins of the virus is likely to take years. Pinning down an outbreak’s animal reservoir typically requires exhaustive research, including taking animal samples, genetic analysis and epidemiological studies. One possibility is that a wildlife poacher might have passed the virus to traders who carried it to Wuhan.

The first clusters of COVID-19 were detected in Wuhan in late 2019, eventually prompting the government to put the city of 11 million under a strict 76-day lockdown. China has since reported more than 89,000 cases and 4,600 deaths, with new cases largely concentrated in its northeast and local lockdowns and travel restrictions being imposed to contain the outbreaks.

New cases of local transmission continue to fall with just 15 reported on Wednesday as Chinese heed government calls not to travel for the Lunar New Year holiday later this month.