COVID-19: Eight from UK test positive after arrival in India 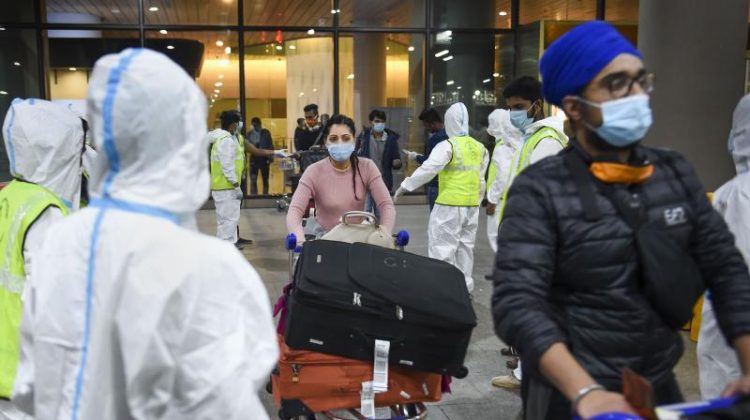 New Delhi: Eight passengers were found to be Covid-19 positive upon their arrival from Britain in late Monday night flights in different Indian cities. These passengers had arrived on different flights from London in Delhi (5), Kolkata (2) and Chennai (1), and have been sent for institutional quarantine. The Central health agencies are closely monitoring their health and their samples have been picked up for genome sequencing to see if they are infected with the new mutated virus detected in the United Kingdom. Several states have quarantined all those with recent travel history to the UK and collected their swabs for testing.

India has intensified its airport surveillance in view of the new, fast-spreading mutated strain of the Sars-CoV-2 (novel coronavirus) detected in the United Kingdom. The Centre on Tuesday also issued a Standard Operating Procedure for Epidemiological Surveillance and Response in the context of a new SARS-CoV-2 virus variant detected in the UK.

The new SOPs say that all positive cases of incoming passengers have to be sent for genome sequencing, and if the report of the sequencing is consistent with the current SARS-CoV-2 virus genome circulating in the country, the ongoing treatment protocol including home isolation, treatment at facility level as per case severity may be followed.

However, if the genomic sequencing indicates the presence of a new variant of SARS-CoV-2 then the patient will continue to remain in a separate isolation unit. “While necessary treatment as per the existing protocol will be given, the patient shall be tested on the 14th day, after having tested positive in the initial test. In case the sample is found positive on the 14th day, further samples may be taken until his two consecutive samples taken 24 hours apart are tested negative,” the SOP said.

Niti Aayog member (health) V.K. Paul said on Tuesday that though the mutation found in the UK is an “adverse development” as it enhances the transmissibility or the spread of the Covid virus by 70 per cent and acts as a super spreader, the mutated virus is of no immediate threat in terms of affecting the disease’s severity or increasing deaths of Covid patients.

He added there was no need to panic as the mutated virus was yet to be traced in India. He said the government had taken the samples of all the passengers from the UK testing positive and sent them for genome sequencing. “There is no reason for panic, though there is cause for us to be more vigilant. The government is closely monitoring it, but the virus’ mutation will have no impact on the potential of the vaccines,” Mr Paul said, adding so far 17 mutations in the Sars-CoV-2 were found so far.

India for the first time had less than 20,000 fresh Covid cases (19,556) –the lowest in 173 days — as overall cases rose to 1,00,75,116. The health ministry said for the first time India’s active caseload fell below three lakh and was the lowest in 163 days. Union health secretary Rajesh Bhushan said the deaths among Covid-19 patients was largely due to the delays in hospitalisation.

On Monday Dr Soumya Swaminathan, WHO’s chief scientist, told NDTV that the mutated strain may already be present in other nations like Italy, Australia, Denmark, the Netherlands and South Africa. “The UK is one of those countries that is doing a lot of whole genome sequencing and is therefore able to track this very closely in real time. I suspect that as more countries look at their data, they might find this variant, or a related variant, might already be there,” Dr Swaminathan said.