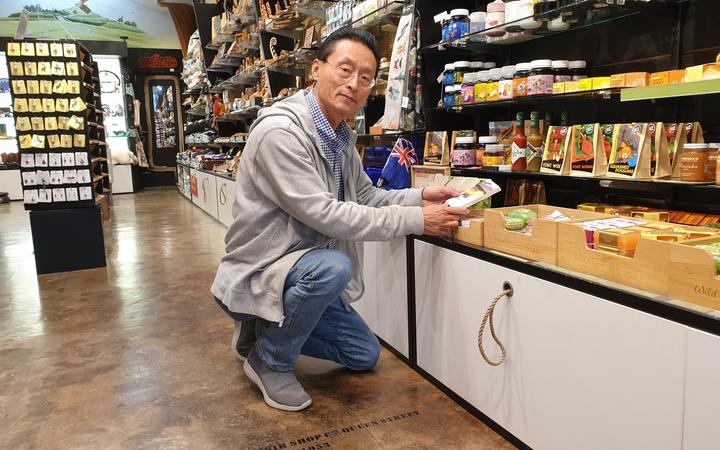 The owner of an Auckland souvenir shop is calling for the government to learn from Australia and offer rental support to struggling businesses.

Benny Li has been running souvenir shops in Queen Street for 25 years. He owned two stores in recent years but has just closed one due to fewer customers since the borders were closed during the pandemic.

Li said before closing the shop, Kiwitown, which was situated at the top of the street, he was hoping the newly introduced trans-Tasman bubble would have helped, but nothing has changed.

“Since first lockdown, we have no international tourists but we’re still paying the highest rental in New Zealand,” he said.

“I decided to close the shop because I cannot continue in the financial side. We were losing money every single day.”

The other store, Kiwiana, has signs on the ground saying it is “the oldest souvenir shop on Queen Street since 1953”. Li said he took over the shop 21 years ago and did not want to see it being closed as well.

“I check all the sales every day. Actually the bubble hasn’t helped much. We only have one trading which is $156 from Australian tourists last week.”

He said he used to have 15 staff members, but now he has only two – and one of them was talking about resigning as their pay reduced due to lower revenue.

He said he was keeping the business going on his savings now but that could only last him a few more months should the current situation continue.

Unlike other industries, the souvenir business is hard to move online as it is more “first-hand experience”.

When people visited New Zealand they liked to come into a store, feel and touch the products, then take something home, Li said.

He said the souvenir business was important as it supported local artists.

Li said the government should give landlords a special fund to provide rent relief in proportion to their tenant’s downturn in turnover, as the Victoria government is offering.

He said landlords should also be supported with reduced tax by increasing depreciation, delayed or extended bank interest payment and tax relief.

“I hope the government can study carefully and immediately take note of our souvenir retailers’ situation and support our industry as soon as possible.”