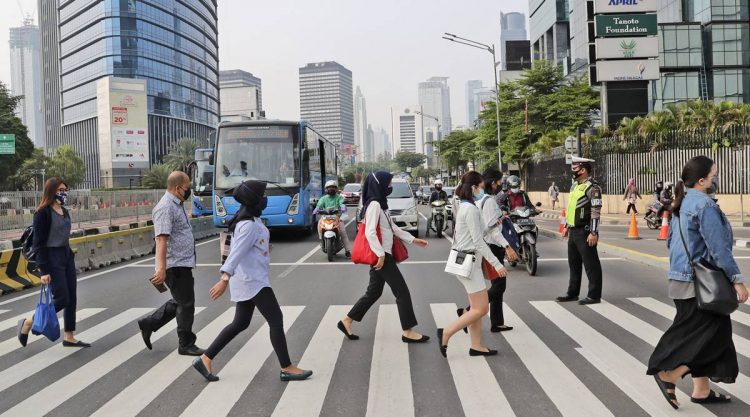 Families dominate Jakarta’s infection clusters, with more than 3,800 during the week of December 7-13, while office clusters numbered more than 300. (Image/AP)

Indonesia’s capital has extended its virus restrictions by another two weeks from Monday to prevent any further spikes in coronavirus cases during the holiday season as infections continue to rise.

Jakarta, which is home to more than 10 million people, will keep capacity and operation limits for offices, restaurants and shopping malls under its so-called transition phase, according to a statement from the local government.

Last week, it also banned public gatherings and required antigen tests for those entering the capital during the holiday season.

“We will monitor the mobility of the population and control it so that there is no transmission, both from outside to Jakarta and vice versa,” Governor Anies Baswedan said. “It is necessary for us, especially families in Jakarta to refrain from doing holiday activities outside the home, especially out of Jakarta.”

The warning comes as recent Covid-19 cases have been traced to people with a history of travel, possibly around the local election held on December 9, according to Monday’s statement. Families dominate Jakarta’s infection clusters, with more than 3,800 during the week of December 7-13, while office clusters numbered more than 300, the statement said.

Jakarta is the epicentre of Indonesia’s outbreak, with 163,111 cases as of Sunday, rising 13.3% over the last two weeks. The capital’s isolation beds are at 85% capacity, while rooms at intensive care units are 80% full.

The local government plans to add more than 7,000 beds and 1,000 ICU rooms, as well as boost its health workforce to battle the virus surge.