Covid-19 Pandemic Can Be Stopped If At Least 70% People Wear Face Masks: Study 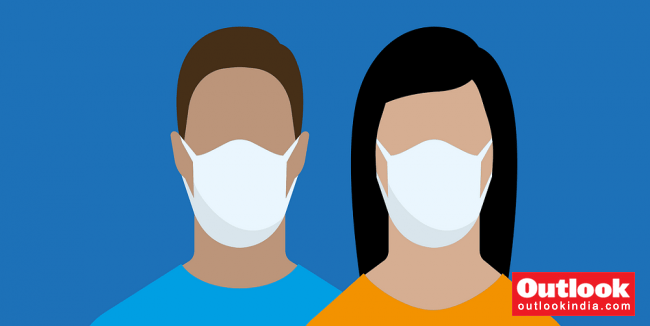 The Covid-19 pandemic could be stopped if at least 70 per cent of the public wore face masks consistently, according to a review of studies which suggests that the type of material used and the duration of mask use play key roles in their effectiveness.

The research, published in the journal Physics of Fluids, assessed studies on face masks and reviewed epidemiological reports on whether they reduce the number of people an infected person spreads the pathogen to — the reproduction number of the virus.

“The highly efficacious facemask, such as surgical masks with an estimated efficacy of around 70 per cent, could lead to the eradication of the pandemic if at least 70 per cent of the residents use such masks in public consistently,” the scientists, including Sanjay Kumar from the National University of Singapore, wrote in the study.

According to the scientists, one key aspect of face mask function involves the size of fluid droplets expelled from the nose and mouth when a person talks, sings, sneezes, coughs, or even simply breathes.

They said larger droplets, with sizes around 5-10 microns, are the most common, adding that smaller droplets below 5 microns are possibly more dangerous.

In comparison, the scientists said the human hair is about 70 microns in diameter.

Among the many types of facemasks in use, such as cloth masks, surgical masks, and N95 masks, they said only the latter can filter out aerosol-sized droplets.

The performance of face masks worn for many hours, such as by health care or other essential workers, impact how effective overall mask-wearing can be, the researchers added.

They found that face masks made of hybrid polymer materials could filter particles at high efficiency while simultaneously cooling the face since the fibres used in these allow heat to escape from beneath the mask.

“There could be some relation between breathing resistance and the flow resistance of the face mask which will need to be studied for a face mask-wearing interval,” said Heow Pueh Lee, another co-author of the study.

“Also, the environmental condition in the compartmental space within the face mask will need to be more accurately quantified using miniaturised sensors and the development of human replicas for such studies,” Lee said.

Based on the analysis, the researchers underscored the importance of consistent use of efficient facemasks, such as surgical masks.

SAS wants to get people curious about analytics with new tagline

People in the Philippines are earning cryptocurrency during the pandemic by playing a video...